Accessibility links
In Irene, Politicians Navigate Tides Of Public Opinion President Obama, like every other politician in America, has the lessons of Hurricane Katrina seared into his memory. During and after Hurricane Irene, he and his team appeared on top of the situation. But natural disasters are one of the ironies of politics — a competent response won't help much, but an incompetent one can really hurt. 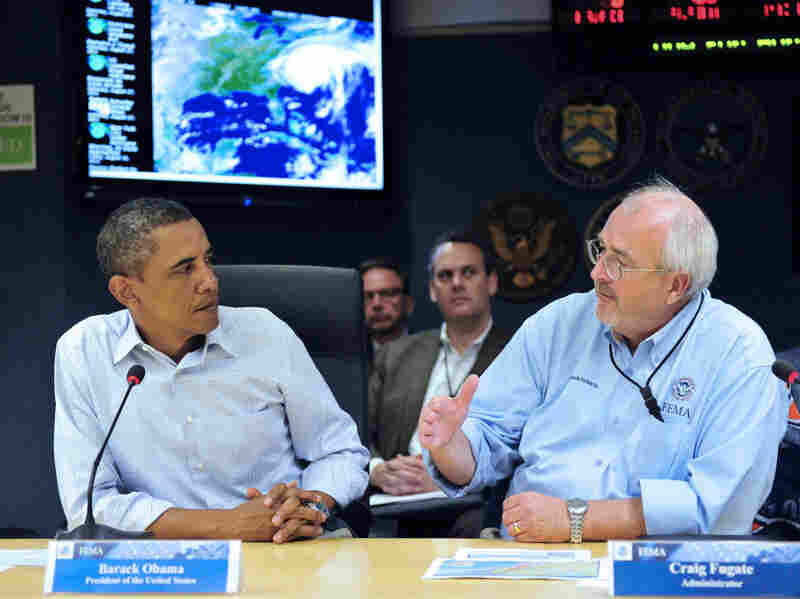 On Saturday, President Obama and FEMA administrator Craig Fugate attended a video teleconference led by FEMA as Irene made its way up the Eastern Seaboard. Pool/Getty Images hide caption 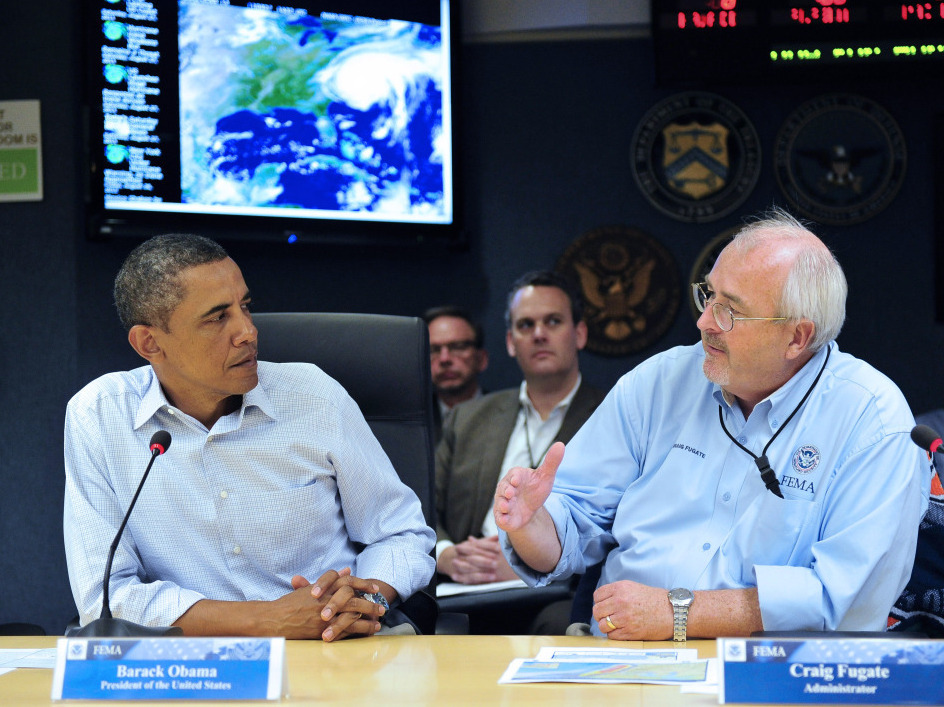 On Saturday, President Obama and FEMA administrator Craig Fugate attended a video teleconference led by FEMA as Irene made its way up the Eastern Seaboard.

The effects of Hurricane Irene are still being felt and their costs being measured — from billion-dollar damages in New Jersey to ongoing flooding in New England.

For local and national leaders, natural disasters can sometimes be political disasters — or opportunities.

The lessons of Hurricane Katrina are seared into the memory of President Obama and every other politician in America. The president made sure that his emergency team was prepared and competent. He showed up at FEMA headquarters over the weekend, and Monday he gave an update from the Rose Garden.

"The effects are still being felt across much of the country, including in New England and states like Vermont, where there's been an enormous amount of flooding. So our response continues," the president said. "But I'm going to make sure that FEMA and other agencies are doing everything in their power to help people on the ground."

There's not much of an upside in terms of public attitudes for doing one's job well when it comes to something like a hurricane or other basic functions of government.

FEMA has received good reviews even from the president's Republican opponents, like New Jersey Gov. Chris Christie. But natural disasters are one of the ironies of politics — a competent response won't help much, but an incompetent one can really hurt.

"We saw President Bush's fairly bad approval ratings become awful approval ratings in response to the management of Katrina, and there was some risk here for President Obama," says Andy Kohut, president of the Pew Research Center. "But there's not much of an upside in terms of public attitudes for doing one's job well when it comes to something like a hurricane or other basic functions of government."

Debating The Role Of Government

But the response to Hurricane Irene could feed into a larger debate about the size and role of government — a debate that will be front and center in next year's presidential election. Even before Irene was a swirl on the weather map, Obama had the beginnings of his argument in place. On his bus trip through the Midwest, he urged voters not to confuse government with politics.

"People are tired of politics, but they're not tired of government," he said. They may not realize it, but government includes "our troops in Afghanistan and Iraq ... our teachers in the classroom [and] ... the FEMA folks who help people when there's a flood or a tornado or a natural disaster," Obama said.

At least one Republican presidential candidate thinks FEMA should be dismantled. On Fox News this Sunday, Ron Paul described FEMA as an example of a bloated federal government.

"We've been conditioning our people that FEMA will take care of us and everything will be OK," Paul said. "You try to make these programs work the best you can, but you just can't keep saying, 'Oh, they need money.' Well, we're out of money. This country is bankrupt."

Paul is on the extreme of this debate — even most conservatives acknowledge the need for some federal government response to emergencies. Still, former Clinton adviser Chris Lehane thinks Irene highlights a fundamental debate.

"I mean, do we want roads? Do we want fire and police protection? Do we want a fully trained military? Do we want a government that's engaged in creating jobs?" Lehane says. "I do think there's a potential opening there, coming out of the debt-ceiling debate, where polls made pretty clear that the public was not thrilled at how the Republicans handled the situation, particularly their willingness to shut down the government and potentially put the U.S. economy in a very perilous position."

Republicans may have suffered from the debt-ceiling debate, but Democrats as the traditional defenders of government may have an even bigger burden. The latest Gallup Poll shows that only 17 percent of Americans have a positive impression of the federal government.

"We have right now one of the lowest percentages of people saying they can trust government in polls taken since 1958," says Kohut. "And the principle driver of opinions about government have to do with satisfaction with national conditions."

And the No. 1 national condition is the economy. Kohut says voters' views of government tend to rise and fall not with government's performance, but with voters' perceptions of the country's economic conditions.

So with 9.1 percent unemployment and a faltering recovery, it's hard to imagine a competent response to Irene — or, for that matter, the killing of Osama bin Laden — giving Obama anything more than a fleeting bump in the polls.