Accessibility links
Costs Of Irene Add Up As FEMA Runs Out Of Cash It's not yet certain what the total cost of Hurricane Irene will be, but it's likely to add up to several billion dollars. That means tough choices for the Federal Emergency Management Agency, which has had to deal with a string of natural disasters this year. 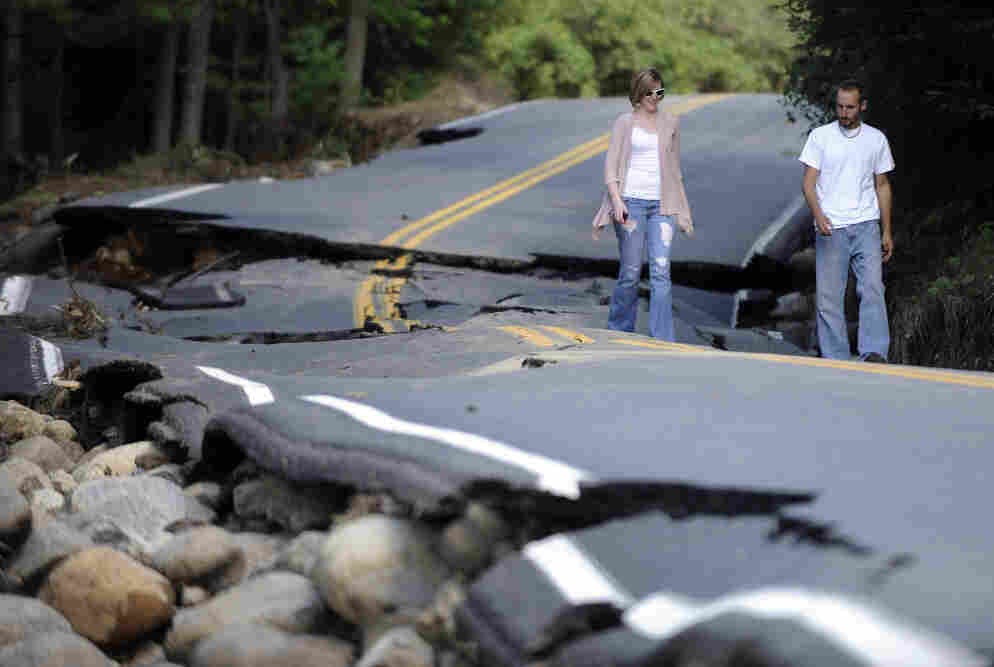 Jarrid Gonyea and his wife, Michelle, check out damage caused by Tropical Storm Irene on Hurricane Road in Keene, N.Y., on Monday. The costs of the storm that stretched across the Eastern Seaboard are estimated to be in the billions. Hans Pennink/AP hide caption

From washed-away roads in North Carolina to historic bridges flooded out in Vermont, Hurricane Irene took its toll up and down the Eastern Seaboard.

But the East is not the only region to suffer from natural disasters this year. There was a string of deadly tornadoes in the South this spring, floods along the Mississippi and in the Upper Midwest, and last May's devastating tornado in Joplin, Mo.

In instances like this, yes, there is a federal role. Yes, we're going to find the money. We're just going to need to make sure that there are savings elsewhere to continue to do so.

So FEMA administrator Craig Fugate says his agency will postpone work on some of the repair and restoration projects resulting from the earlier storms to pay for the immediate needs resulting from Irene.

Fugate, speaking to reporters in the White House briefing room Monday, said his decision has already been misinterpreted: "A lot of people thought, well, the people that have been impacted by the tornadoes and floods — we're going to take that money away from them."

But Fugate stressed that is not the case.

"The survivors that are eligible for assistance are still getting funds. Individual assistance programs were not affected by this, nor was any protective measures, or any debris clearance, or any project that had already been approved," he said.

In places like Joplin, Fugate said, the only projects that will be suspended are those still in the planning stages. Both of Missouri's senators are urging the White House to make sure FEMA funds continue to flow into their state.

FEMA's role in a disaster is multilayered. It provides immediate assistance, helping victims pay for shelter and food and medical needs. Later on, it pays to rebuild schools, bridges and water treatment plants.

For instance, FEMA is still paying for rebuilding related to Hurricane Katrina, which struck six years ago this week. 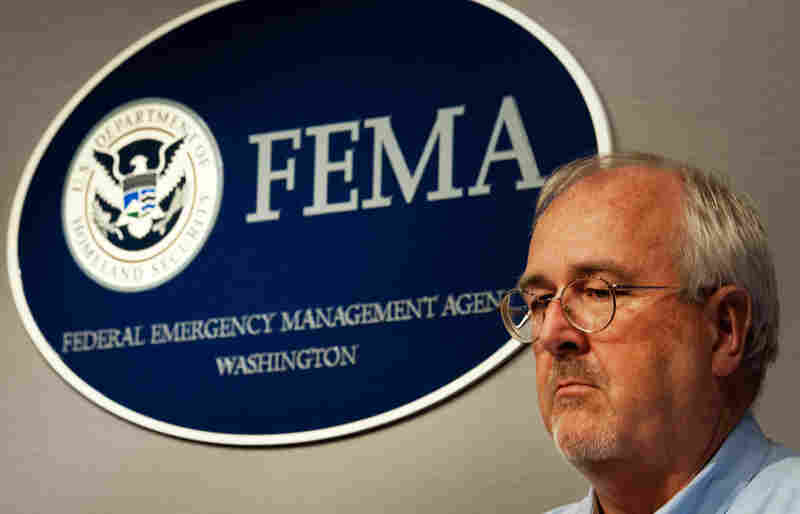 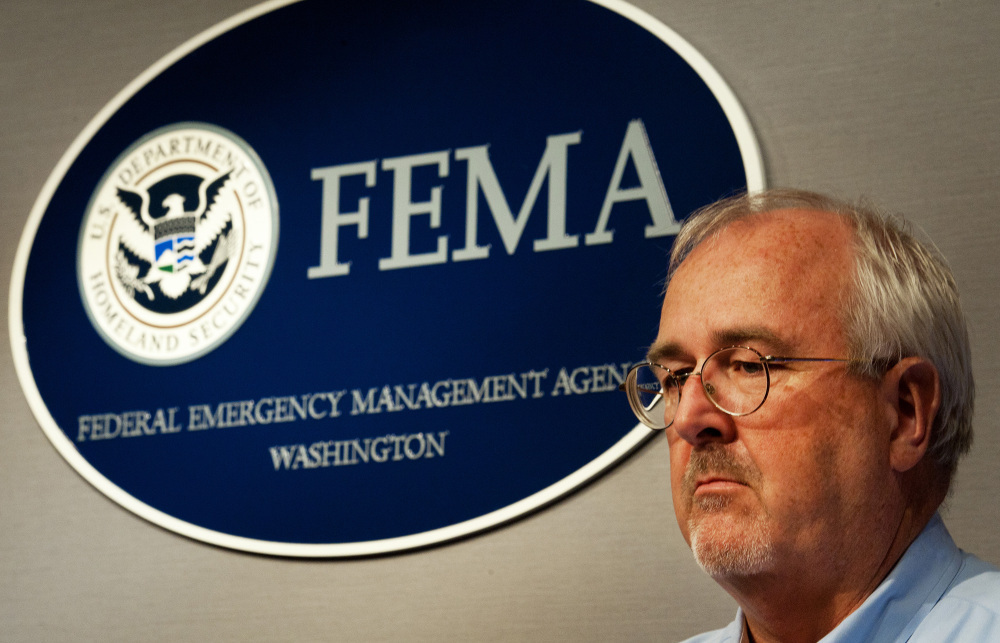 FEMA Administrator Craig Fugate, shown at a press briefing last week in Washington, says his agency will postpone some repair work on earlier disasters in order to pay for the immediate needs of Irene.

Dan Kaniewski, who worked at FEMA during the George W. Bush administration and now teaches at George Washington University, says Fugate is making the right decision.

"He's got to deal with the cards he's been dealt," says Kaniewski. "He has a limited amount of money, and he realizes, rightly so, that money has to be allocated for the most pressing needs. And right now, it's those individuals who have been impacted by Hurricane Irene — they need to be provided the assistance to make sure they have a roof over their heads."

All told, there have been 10 storms that cost at least a billion dollars each this year, if you include Irene's expected costs. And FEMA says its disaster relief fund is below the billion dollars it likes to keep on hand.

So the administration will be forced to go to Congress for more aid, setting up a potential fight with House Republicans. In the past, emergency aid funds have been treated as, well, emergencies, and the money spent was added to the deficit. No more, says House Majority Leader Eric Cantor.

Speaking on Fox on Monday, Cantor said the money to pay for disaster aid will have to be offset with cuts elsewhere in the budget.

"In instances like this, yes, there is a federal role. Yes, we're going to find the money. We're just going to need to make sure that there are savings elsewhere to continue to do so," Cantor said.

In fact, the House has already approved a measure to put an additional $1 billion in the disaster relief fund for this year, and some $2.65 billion for next year.

The Senate has yet to act, but the top Democrats on the Appropriations Committee vow to take up a FEMA funding measure as soon as lawmakers return to the Capitol next week. The Senate bill, however, is unlikely to contain the offsets demanded by House Republicans.

That's likely to mean yet another confrontation between the two parties and the two chambers of Congress.