Accessibility links
Your Friends Are Not Your Audience: A Disturbing Internet Lesson In Perspective A man recently stepped up to a microphone to tell a story he thought was about a really funny thing that happened to him. Others think he confessed to sexually assaulting a woman in a hotel room. Still others suspect the story isn't even true.

Your Friends Are Not Your Audience: A Disturbing Internet Lesson In Perspective

Your Friends Are Not Your Audience: A Disturbing Internet Lesson In Perspective 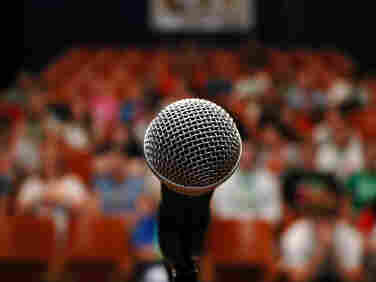 It's a piece of necessary wisdom that will be shared with countless college students this fall by nervous parents: Tell a story at a party, and it's heard by a handful of people, whose reactions you perhaps have some ability to predict. Tell it on the internet, and it will be heard by the people you know and the people you don't — and the latter outnumber the former by several orders of magnitude. Don't put your picture on Facebook flashing the camera or looking drunk or kissing someone you might later regret kissing.

But for people trying to break into some kind of a creative field, the ability to broadcast your work is a blessing. Perhaps your stand-up video on YouTube will be the one that goes viral, or your blog post will be the one everyone reads. There are a million opportunities to be seen, and the best part is that you don't have to deal with so much "no."

The development of online writing and performance exposes new voices and lets those voices experiment with provocative, enormously creative content, and there are a thousand good things to say about that. Gatekeepers have traditionally been similar to each other in sensibility and demographics, often to the detriment of diverse content.

But who you are talking to no longer has anything to do with who you think you're talking to. You can tell a story to your narrow circle a hundred times and have nobody bat an eyelash, but the minute you step outside that circle, everything is completely different. And that can underscore the way that a sudden explosion of your audience can give what you say a completely unexpected reception.

At an improv comedy show on August 14, audience members were invited to step up to the microphone and tell a story that would inspire an improv set. Partway through the performance, a man who identifies himself as "Eric" begins to tell his story. He explains that he was working as a host/cook at Second City in Chicago, and a drunk woman from out of town hit on a friend of his, but the friend had a girlfriend, so he effectively passed her number off to Eric. (Like ... a baseball card? If you already find this story creepy, rest assured that it's only getting started.)

In Eric's version of events, he goes to the woman's hotel room, and she tells him he's not the guy she invited. "Yeah," he says, "but I'm the guy who showed up." [Huge audience applause.] She tells him to leave, but he persists (with charming lines like "my friend said this was a sure deal"), and when that doesn't work, he asks to borrow her cell phone, telling her it's so he can get a ride and leave. When she goes into the room to get her phone, she leaves the door open. As he describes it, this made him think, "Bingo." (Be aware before you watch the video, where Eric begins speaking at about the 38-minute mark: It's upsetting and crude.) (And "Yowie.com," which hosts the video and offered it as an embed, has written to us to make sure we tell you that that's where the embedded video came from. So now you know: Get all your incredibly uncomfortable monologues from "Yowie.com.")

So he goes into the room and closes the door behind him. She tells him again that he needs to leave, and at that point — again, quoting Eric — his thought is, "It's now or never." So she asks him to leave again, and he says he doesn't think she really means it, and then they "end up on the bed ... making out." How exactly they "ended up on the bed" when she was just telling him to leave repeatedly is left unstated, but to cut to the chase, he winds up having sex with her, after which she tells him to get out. Asked if she was attractive, he gives a noncommittal "eh."

[I'll wait here while you take a hot shower and wash off that story.]

[EDIT: It's been pointed out to me via e-mail that something I left out because I found it confusing and perhaps unfairly damning if you didn't hear his weirdly ambiguous version of it for yourself actually makes the story less damning to other people, so it would be better to describe it, and I'm happy to do that. Basically, at one point, after they're on the bed, Eric describes the woman pinning him down physically and repeating that he needs to leave. But the next thing he says, without much explanation, is that they continued making out. So on the one hand, he says that she physically resisted, but on the other, he says she was stronger than he was. So take that addition to the story for what you will. Given that he doesn't describe physically overpowering her and that wasn't my objection to the story, I didn't find it enormously significant one way or the other, but perhaps you do.]

Predictably, the question arose pretty quickly, as Jezebel asked it, "Is This Comedy Monologue A Rape Confession?" Since then, there's been extensive discussion in various comment sections of the fine points of consent and law and intoxication, and since The Second City tweeted from its official account that it had "alerted the proper authorities," those questions will have to be answered by people who can figure out what really happened and whether all or any of this story is true, or whether it's just a story — a bit he's doing for the crowd.

Here's the thing, though. In the best case scenario — in the absolute sunniest way you can possibly look at this story — Eric is telling a story that he thinks is really funny about how he used an anonymous woman like a blow-up doll, doing whatever he had to in order to get in the door, ultimately persuading her to go along, caring not at all that she didn't want to have sex with him, having sex with her, and then leaving. He treats her like she's inhuman and valueless and gross and nasty but still fine for having sex with once, and he thinks he's the hero of this story.

What has stuck with me ever since I saw this video — what has really kept me restless and bothered — is that he has no idea it might bother anyone. He has no idea that anybody would object to this at all, while I'm over here barely being able to listen to it because it's so upsetting and it pings every instinct I have about creeps and The Gift Of Fear and RUN RUN RUN YELL FOR HELP. He told this story thinking maybe that it would get on YouTube and everyone would think it was hilarious ("No, but I'm the guy who showed up!"). He had no idea that Second City would wind up saying, in effect, "Uh, yeah, we ... called the cops."

If Eric thought telling this story in public would open up a serious public back-and-forth about whether this is a story of sexually assaulting this woman, he wouldn't have done it. He thinks he looks cool in this story, and indeed, a certain number of people in the audience keep laughing the whole time.

This is the curse and the blessing of the instantly multiplied audience, I suppose. Whoever has heard this story before apparently thought it was funny. They don't seem to have found it creepy, anyway. And it seems to be far from the first time he's told it, considering that at one point he actually says he's speaking "the way I tell this story to my friends."

Maybe it's not true. Maybe it's part-true. That certainly matters to the police, and to the woman, and to him, and presumably to his family and friends. But whether he considers this a true story where everyone will be on his side or a comedy routine that will strike people as some kind of a hooray-for-the-underdog narrative, I find it profoundly upsetting. Having it be true is awful, but having it be something he would invent or embellish, either as comedy or as image management, also crawls across my skin like an entire army of cockroaches.

Certainly, the fact that he told this story may be a good thing if it gets somebody to deal with whatever is going on here, whether there's a crime to prosecute or not. But the idea that somewhere, there is a guy who thinks this story makes him look good, who apparently had no idea that it would make him look to a lot of other people like a criminal or at best a revolting heel, makes me wish the always-on video had never been invented, because part of me just didn't want to know.