Accessibility links
Ex-GM Exec Hopes To Kick-Start Detroit Schools The school system is looking for an answer to its low achievement, huge debt and declining enrollment with new leadership and ideas. But teachers say they've been left out of the equation. 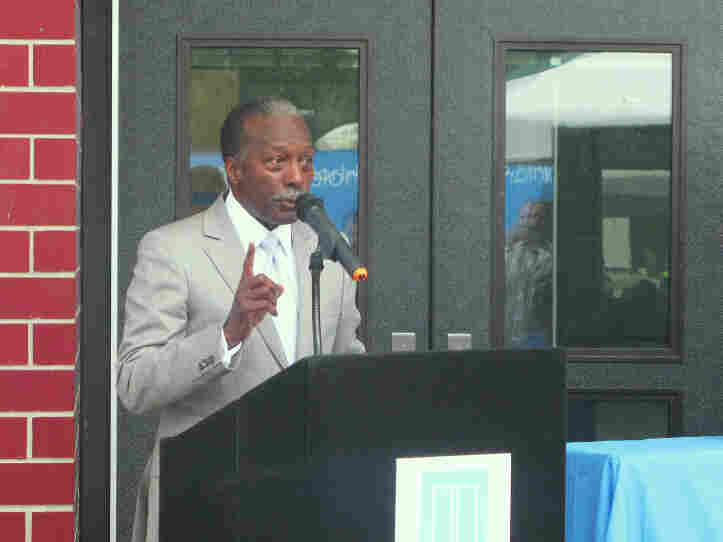 If there were an award for the "most challenged" school district in the United States, the Detroit public school system would have good reason to claim the title.

The system is wrestling with crumbling buildings, low achievement and a decline in enrollment that just won't stop. But this year, the system has added some new faces and plans to the mix in an attempt to revive it.

The Detroit Public Schools' optimistic slogan this year is "We're in," which is what the students from Martin Luther King High School were chanting at an event at Amelia Earhart Elementary-Middle School that marked the beginning of the fall enrollment season.

The cheerleaders and the marching band are part of a re-branding effort for the district. DPS wants parents to know this is not the same old struggling school system.

Witness the brand new school that served as the backdrop for this event, which was run by the new emergency manager of the schools, Roy Roberts. He told attendees he has lots of new things to offer, including added instructional time in reading and math, an extended school day in summer school, and netbooks for all sixth through 12th graders.

DPS has been re-branded before, with new leaders and different forms of state takeover. But Roberts' style is fresh — he's genial, dapper and a former General Motors executive who came out of retirement to help fix the schools. He likes to say he could have made a lot more money sitting on corporate boards.

Roberts says he is getting no grace period.

"I think the honeymoon ended the first day I was in the job," he says. "Ultimately, it's not what you say, it's what you do. People are going to watch my hips, not my lips."

Roberts' first major action is a new state-led effort to shake up the lowest achieving schools in DPS. Starting next year, they will be part of the Education Achievement System, a new district for the weakest schools.

His chief task, he says, will be guaranteeing that struggling schools have some independence from the Detroit Public Schools.

But it's unclear why kids have to wait a year before failing schools get more independence from the central administration.

Michael Tenbusch of the local United Way has been leading a coalition of schools that already have some autonomy. He says his kids' achievement has already improved dramatically and would accelerate if he had more control right now.

'At A Critical Juncture'

The other new face on the scene is Doug Ross, the founder of a successful charter network in Detroit. Ross is also an outspoken critic of DPS, but he has agreed to work for the school system as the head of new charter schools authorized by the district.

Ross says that with the student population plummeting, the schools in Detroit are at a critical juncture.

About 40 percent of Detroit students already attend charters, and under Ross, that number is expected to grow. Just like Roberts, Ross sees his job as making sure the central administration leaves the charters alone. Successful schools will attract students, Ross says.

"I think where parents are coming is to actually where the political structure's been heading," he says. "Which is to say, 'You know really, we don't care too much about the governance. How good's the school?' "

All this talk about the new Detroit Public Schools is upsetting to those who feel like they have been cut out of reform plans — the teachers.

Keith Johnson, head of the Detroit Federation of Teachers, is combative as he considers the changes currently under way. He says his members had no input.

"If they want to fly solo on this, they're going to crash-land," he says. Johnson says this rush to the future will just be window dressing if the district ignores past realities, like high levels of truancy and violence.

He is also skeptical about the plan to create a new district for failing schools, with a new name.

"You can call it anything you want," he says. "If you don't address those intrinsic cultural inhibitors, nothing is going to change."