Accessibility links
Perry, Romney Boost Military, Bash Obama In Texas The two leading GOP presidential candidates got a warm welcome at the Veterans of Foreign Wars convention in San Antonio this week. Texas Gov. Rick Perry and former Massachusetts Gov. Mitt Romney both boasted of their support for the military and aimed their vitriol at President Obama. 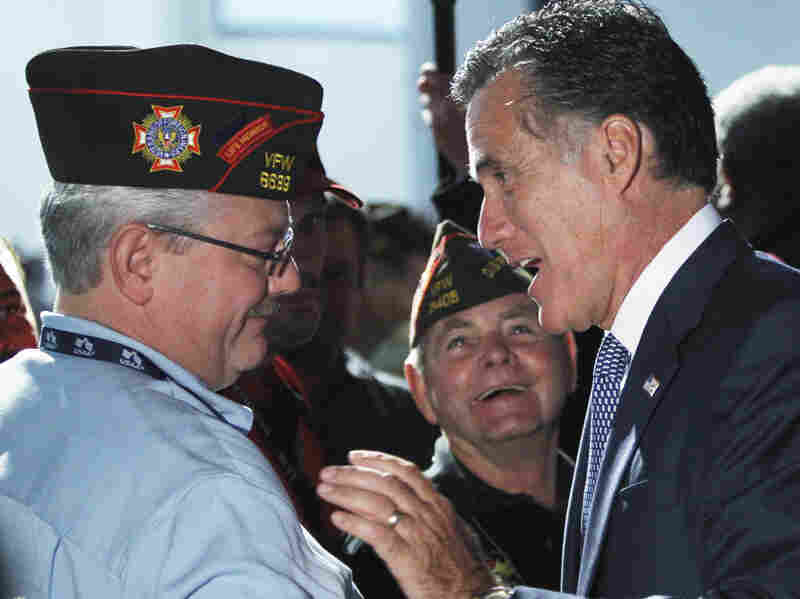 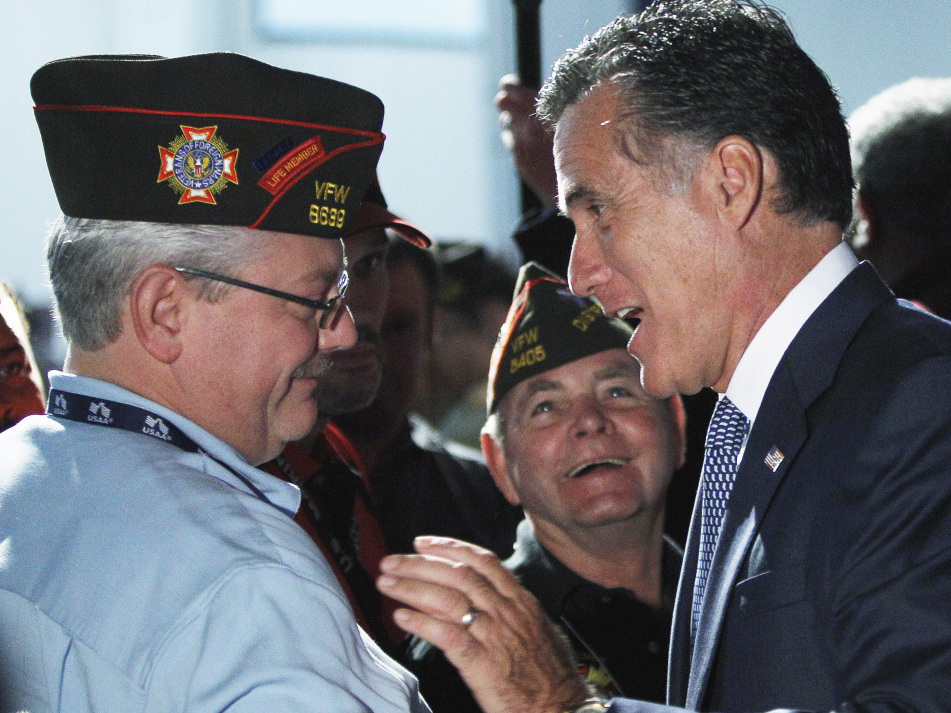 Republican presidential candidate Mitt Romney greets veterans after addressing the national conference of the Veterans of Foreign Wars on Tuesday in San Antonio.

The two top leaders of the large field of Republican presidential hopefuls have gotten a warm welcome this week from the friendly crowd at the national convention of the Veterans of Foreign Wars in San Antonio.

Texas Gov. Rick Perry and former Massachusetts Gov. Mitt Romney both boasted of their admiration and support for the military in their speeches, but they sidestepped attacks on each other, saving their vitriol for President Obama.

Romney and Perry used the hawkish crowd of former soldiers, airmen, sailors and Marines to tear into Obama's performance as commander in chief.

"Our involvement in Libya was marked by inadequate clarity of purpose before we began the mission," Romney said Tuesday morning at the Henry B. Gonzalez Convention Center, "and then mission muddle during the operation and ongoing confusion as to our role in the future."

Romney did not serve in the military. Both in his 2008 presidential run and in his current campaign, Romney has pumped up his credentials as a business executive. As such, the war he would wage, he told the crowd, was against the defense bureaucracy.

"As a conservative businessman who spent most of his life in the private sector, I look at ... inefficiency and bloat and I say, 'Let me at it,' " Romney said.

In contrast to Romney, Perry did serve in the military. And in his speech to the veterans group on Monday, he made sure they knew it. 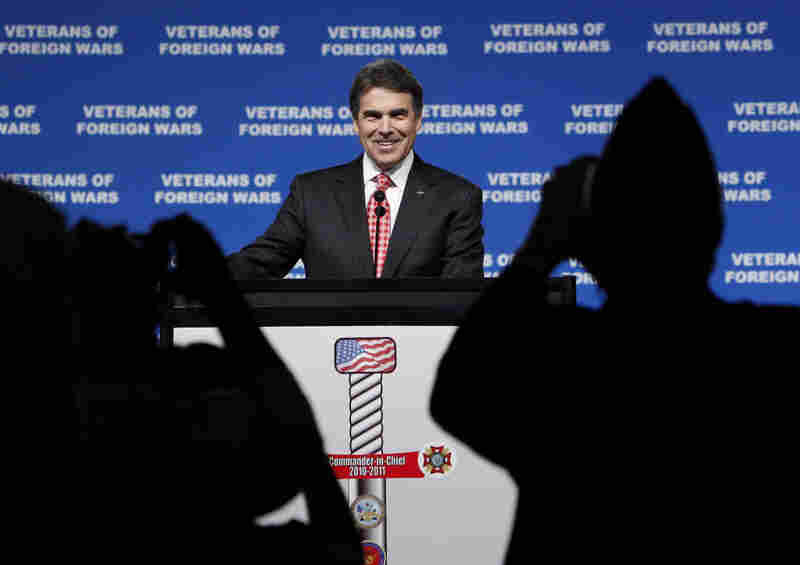 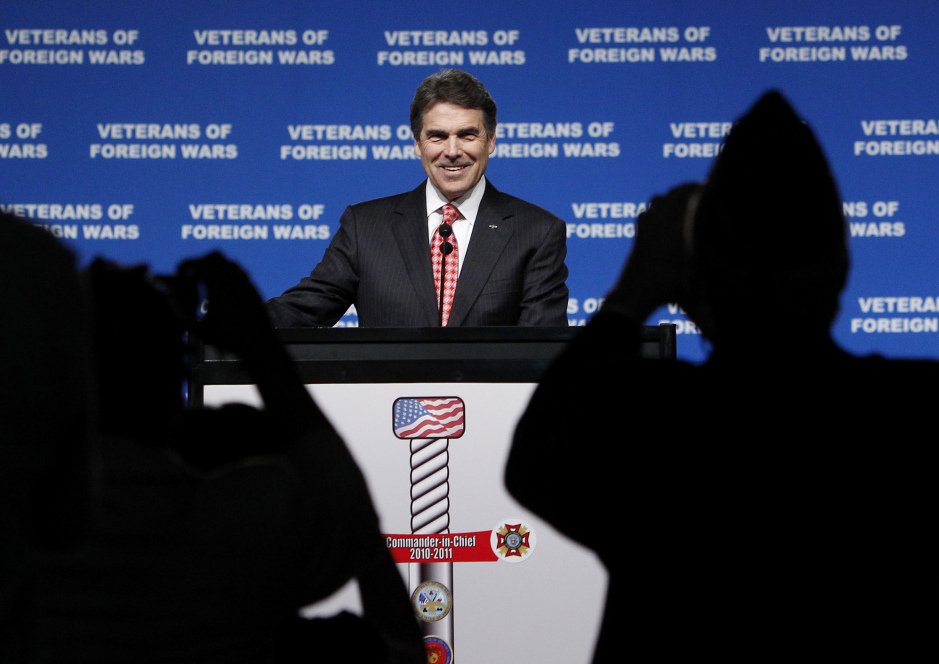 Republican presidential candidate Rick Perry is photographed by attendees as he addresses the VFW convention on Monday.

"As a former Air Force pilot, I had the great privilege to fly [tactical] airlifters around the globe from 1972 to 1977," he said. "I know the credo of survivors of war, that [the only] heroes are the ones who never make it home. But in my eyes, you all are heroes — every one of you."

Perry added that he never flew combat missions. He flew C-130s in the United States, the Middle East and Europe and left the Air Force with the rank of captain to return to Texas and farm cotton.

Perry has, in the past, been comfortable criticizing the president for not doing more to protect the Texas-Mexico border.

In his appearance in San Antonio on Monday, he took on Obama for his handling of multinational forces, but he didn't specify in which conflict.

"We cannot concede the moral authority of our nation to multilateral debating societies," Perry said. "And when our interests are threatened, American soldiers should be led by American commanders."

With Perry as the most recent arrival to the race, the VFW convention was an early opportunity for people to see the two leading GOP candidates back to back.

"I like the governor yesterday much better," said Tom Ferguson, a former Marine from Colonial Heights, Va. "I don't understand all of Mitt's policies or his plans ... but I feel more in tune with the governor from Texas. ... He seemed more personable than Mitt does. Mitt seems like a career politician, as you would say."

An interesting observation, since Perry has held elected office for nearly 27 years and has been governor since the end of the Clinton administration. Romney was governor of Massachusetts for just four years.

Perry and Romney and other candidates will have the chance to face off next week at a Republican debate at the Reagan Presidential Library in Simi Valley, Calif.