Accessibility links
Why Stores Sell Halloween Stuff Before Labor Day For some, it's never too early to put shoppers in a holiday mood. Stores are putting out seasonal merchandise earlier than they used to, several industry experts say. One reason: If they don't jump the gun, their competitors will. 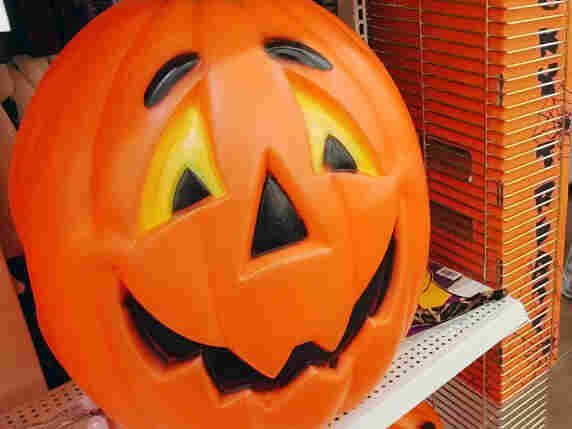 Stores try to get a leg up on their competition by putting seasonal merchandise out early. Danny Johnston/AP hide caption 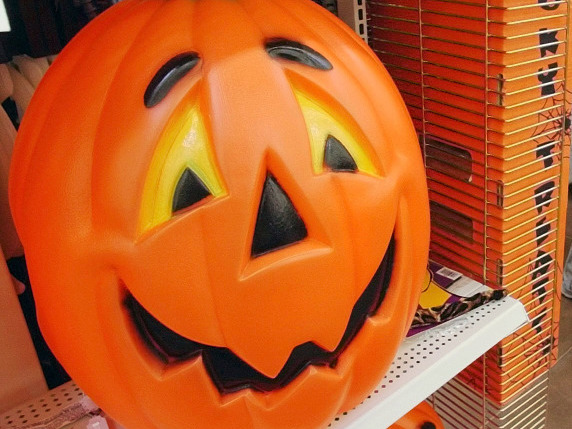 Stores try to get a leg up on their competition by putting seasonal merchandise out early.

If you walk into the Safeway near Washington, D.C.'s Chinatown, you'll see a small display of Halloween decorations: witches hats, haunted houses, jack-o-lanterns — the works. That might not seem so strange if it were October or even late September. But it hasn't even hit Labor Day yet.

Safeway isn't the only retailer getting a jump on the holiday. Across the city, shoppers will find Halloween merchandise in Walgreens, Claire's Accessories, Target and Macy's.

The National Retail Federation doesn't have hard numbers on this trend, but the group does have anecdotal data.

"We do hear from retailers that there is a demand for early holiday merchandise," says Kathy Grannis, director of media relations at the federation. And several industry experts say it's an across-the-board trend.

Purdue University retail management professor Richard Feinberg says there's one major reason retailers put seasonal merchandise out earlier: "The marketplace is so competitive that they can't take a chance that people are going to spend their $50 somewhere else."

And this strategy could allow retailers the time to figure out what's popular and replenish high-demand merchandise, Feinberg says. "Stores have become labs for telling them what to order," he says.

Steven Kirn, executive director of the David F. Miller Center for Retailing Education and Research at the University of Florida, says it also swells the seasonal selling period, creating what's sometimes called the "Christmas creep." Black Friday, or the day after Thanksgiving, was once the debut of winter holiday buying. But Kirn says retailers have been pushing to get seasonal buyers in the door sooner.

It not only allows stores a larger window during which to sell but also means an item might get more time before it goes on sale, says Dinesh Gauri, assistant professor of marketing at Syracuse University.

Another factor, Feinberg says, is that over the past five years, stores have learned to keep leaner inventories. He says retailers have gotten better at predicting what will sell — and stores have learned it's better to sell out than have inventory left over.

One of the worst things that a store can do is have empty shelves. They need to fill that with something.

But Marlin Hutchens, market vice president at Walgreens, says while having an item on the floor for a long time means it has more time to sell, the reason seasonal items are appearing on the floor earlier than they used to — at Walgreens and elsewhere — has more to do with logistics.

At Walgreens, inventory is ordered a year or so in advance, he says. The products are shipped from around the world, go through customs, move to a company warehouse and arrive in individual stores.

"There's not a great deal of storage space in stores," he says. So, things go out on the floor.

At the same time, Feinberg says it's important not to speak in generalities. Many retailers have shortened the time between ordering an item and putting it out on the floor. And he notes that the buying cycles of drugstores are different from those of department stores.

But outside the Safeway in D.C., customers seemed somewhat indifferent to when stores put out their seasonal merchandise.

Ryan Tilden of Washington, D.C., says it surprises her to see holiday items out so early, but she never buys the stuff. "It just makes me feel rushed," she says.

Nehal ElDeeb, also of D.C., says she won't buy seasonal items early unless she's hosting a party or special event. "I don't just buy it because it is there," she says.

Sometimes customers do grumble when they see seasonal items early, Hutchens says. But it doesn't have an impact on sales.

"Some people will complain as they're putting it in their basket," he says.