Accessibility links
Walter Reed Was Army's Wake-Up Call In 2007 Long a model for top-notch care for presidents and soldiers alike, Walter Reed Army Medical Center became a byword for bureaucratic bungling in 2007. Army officials are still addressing the failures revealed by an investigation that found wounded soldiers left to fend for themselves. 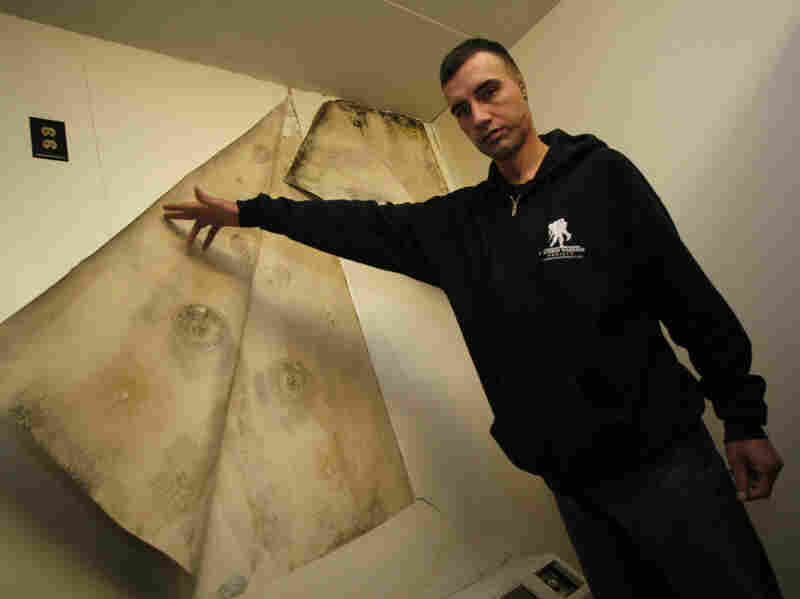 Jeremy Duncan, a wounded Army specialist assigned to Walter Reed's Building 18, peels back the wallpaper in one of its rooms to show mold in January 2007. Michel Du Cille/The Washington Post/Getty Images hide caption 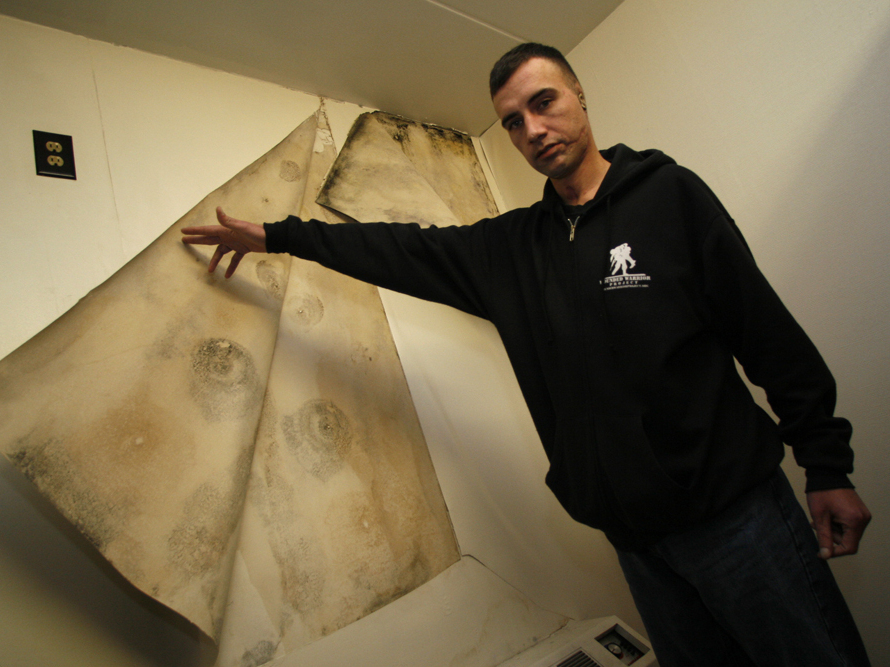 Jeremy Duncan, a wounded Army specialist assigned to Walter Reed's Building 18, peels back the wallpaper in one of its rooms to show mold in January 2007.

For more than a century, the Walter Reed Army Medical Center was known as the hospital that catered to presidents and generals. President Dwight D. Eisenhower was treated and died there. So, too, did Gens. "Black Jack" Pershing, Douglas MacArthur and George Marshall.

But in recent years, Walter Reed was shorthand for scandal.

A 2007 series that dominated the front page of The Washington Post told of decrepit housing and wounded soldiers left to fend for themselves.

But the problems were identified years before. Salon.com wrote about it in 2005. Members of Congress later said they had complained to senior Army officials a year or two earlier. Nothing had happened.

Soldiers Fending For Themselves

Among those who had problems at Walter Reed was Oscar Olguin, an Army private who lost a leg in Iraq in 2004, when a suicide bomber struck his Humvee outside the city of Ramadi.

Olguin was discharged from the hospital at night in December 2005, in his wheelchair. He was simply told to find his new quarters.

"I got out. I was in my wheelchair. I was by myself," Olguin says. "I got released in the middle of the night. I'm trying to find my way. So I just started rolling around in my wheelchair and ended up taking the streets and just following the signs to get to Mologne House." 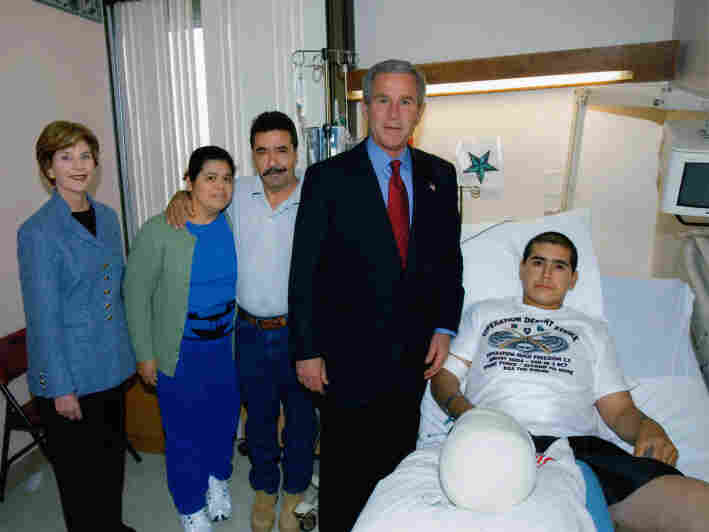 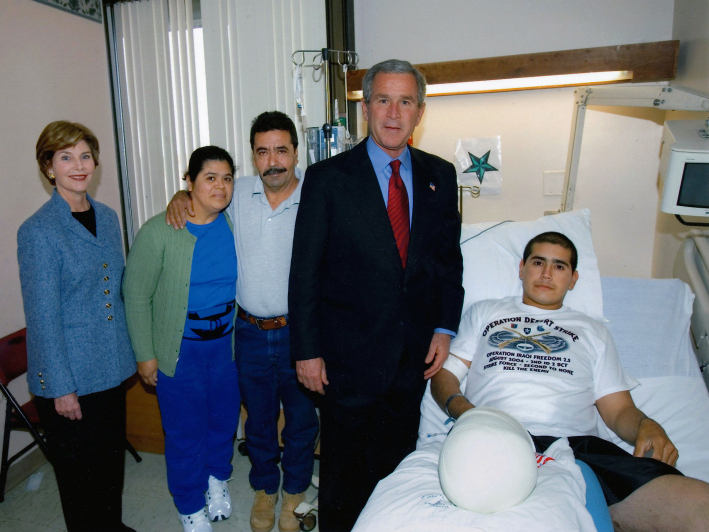 At Walter Reed, Oscar Olguin and his family were visited by President Bush and first lady Laura Bush. But Olguin says that when he left the hospital, he had to fend for himself.

He never checked in with anybody, even as he attended his physical therapy appointments. It wasn't until three months later that Olguin was contacted by an Army master sergeant. "You're in my platoon," the sergeant told him, "and you have to check in with me every morning."

That wasn't Olguin's only problem. He also had a roommate.

"I had a roommate who was suffering from severe PTSD [post-traumatic stress disorder], who wasn't supposed to have any sharp objects," Olguin remembers. "I didn't know."

Olguin went on a ski trip with other wounded soldiers, and when he returned, his roommate was gone. Military police had taken him away.

"He tried to slash his own wrists with the knives that I had in my room," says Olguin. "That was probably the worst part. He could have killed himself, and I could've played a part in that and not even known."

The problems had nothing to do with inpatient care, widely seen as some of the best anywhere. Oscar Olguin said the care was first-rate. It had to do with outpatient care — or the lack of it.

A Flood Of Wounded, And Bureaucracy

Soldiers had to navigate the system virtually alone, arranging appointments with doctors and physical therapists, dealing with medicines and paperwork.

"Our military and veterans health care system wasn't ready for an influx of wounded warriors," says Paul Rieckhoff, an Iraq War veteran and head of the Iraq and Afghanistan Veterans of America, an advocacy group.

The problem was essentially twofold: the volume of wounded soldiers coming back from Iraq and Afghanistan, and the lack of adequate, trained staff. 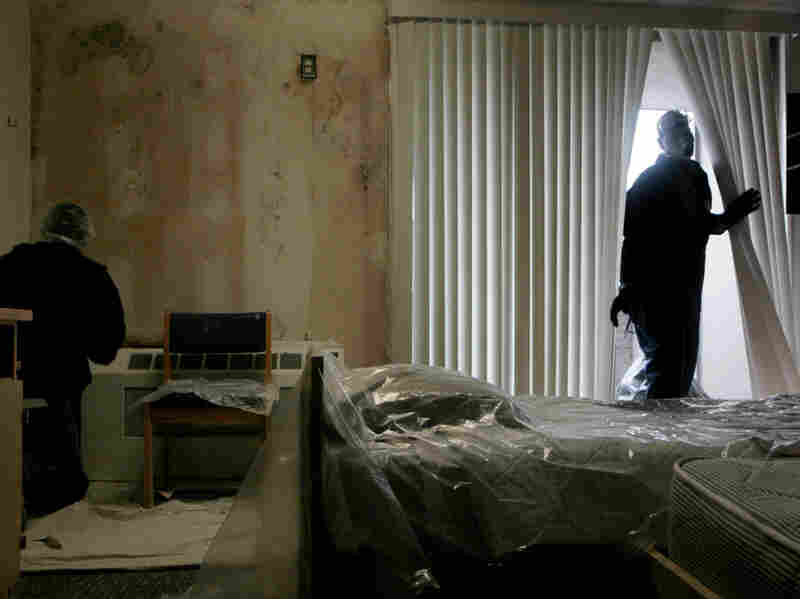 Workers for IAP World Services peel moldy wallpaper off the walls and make repairs in one of two rooms in Building 18 at Walter Reed in Washington, D.C., in February 2007. Nikki Kahn/The Washington Post/Getty Images hide caption 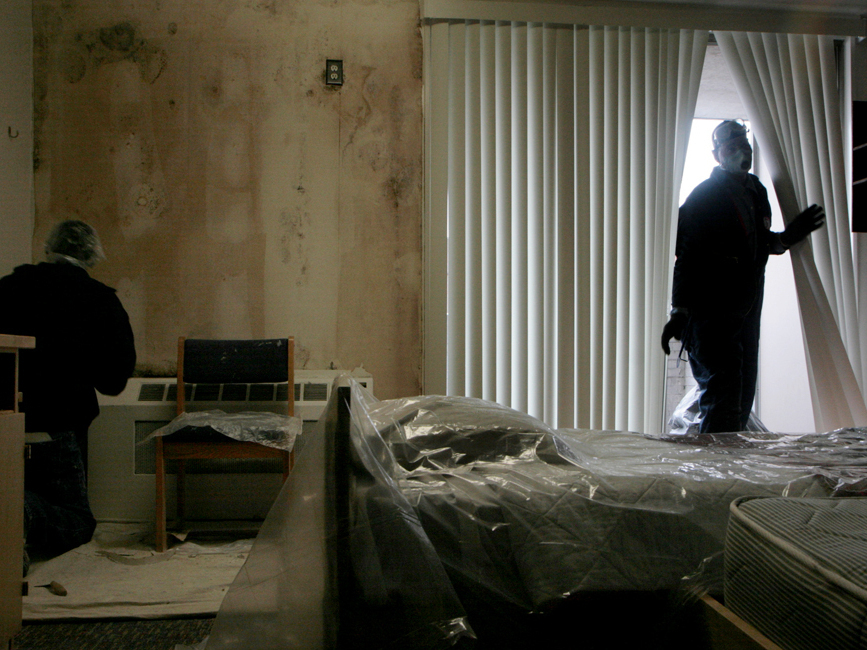 Workers for IAP World Services peel moldy wallpaper off the walls and make repairs in one of two rooms in Building 18 at Walter Reed in Washington, D.C., in February 2007.

After the Post series broke, Defense Secretary Robert Gates fired top Army officials who either had downplayed the problems or hadn't moved fast enough to deal with the issues.

Gates brought in Lt. Gen. Eric Schoomaker, a physician himself, to clean up Walter Reed. Schoomaker told NPR that the medical community at the facility was overwhelmed.

The Army ended up hiring a lot more people — about 3,500 — to help care for the wounded soldiers. And the Army set up Warrior Transition Units at Walter Reed and around the nation, 29 in all, that now care for about 10,000 soldiers.

Schoomaker, who has since been named the Army's surgeon general, says each soldier is now being overseen by three separate officials.

"This triad of care, we call [it], around every soldier," Schoomaker says, "consists of a nurse case manager, a primary care manager and a squad leader who's looking out for care and feeding and administrative problems, pay issues, travel issues, educational issues. You're looking at doctors' appointments, or, 'You need time to recover from this before you can go to that.' "

Next Challenges: Drugs, And Long-Term Care

The Army has become more responsive, but there are still problems.

An Army inspector general's report from earlier this year found that as many as one-third of the soldiers in Warrior Transition Units are dependent on drugs, or addicted to them.

The report also found that there are still shortages of psychologists and other behavioral specialists. Those shortages, the report said, can lead to delays in diagnoses and treatment.

The Army says it is dealing with the over-reliance on drugs. It now prescribes only the minimum quantity necessary for treatment, and has started a program that assesses possible "high-risk" soldiers and closely monitors their care.

Also, the Army has increased its use of alternative therapies, such as acupuncture and yoga.

Still, veterans' advocates say that despite the change, both the military and the Department of Veterans Affairs continue to struggle with the overall issue of providing care for the wounded.

Soldiers with horrific physical and psychological wounds continue to return each week from Afghanistan and Iraq. The challenge is to provide them, and their families, with adequate care and support for decades to come.