Accessibility links
When Will Closing Walter Reed Pay Off? Maybe 2018 When Walter Reed was slated for closure back in 1995, the goals were to improve care for the wounded, and to save money. The final patients left this past week. So was shutting the base a good deal for taxpayers? The cost of closing it has tripled. 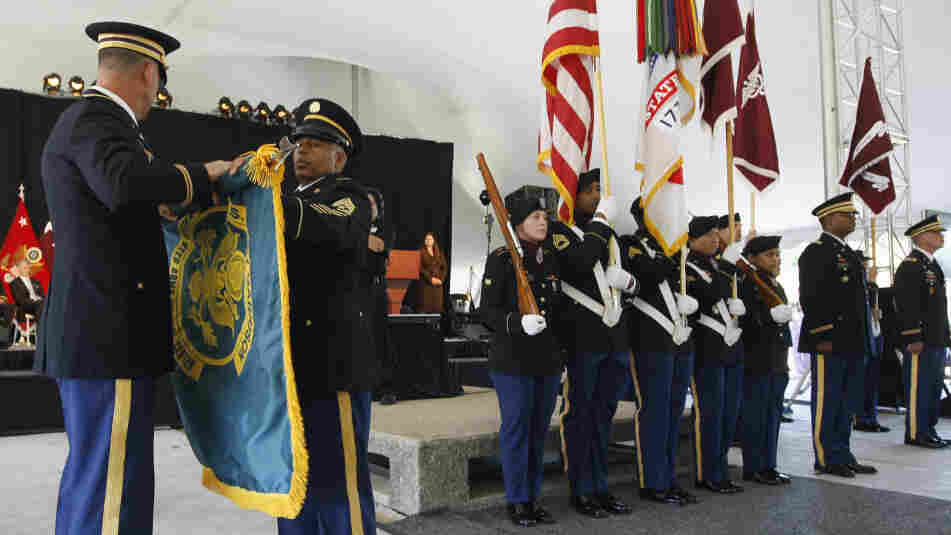 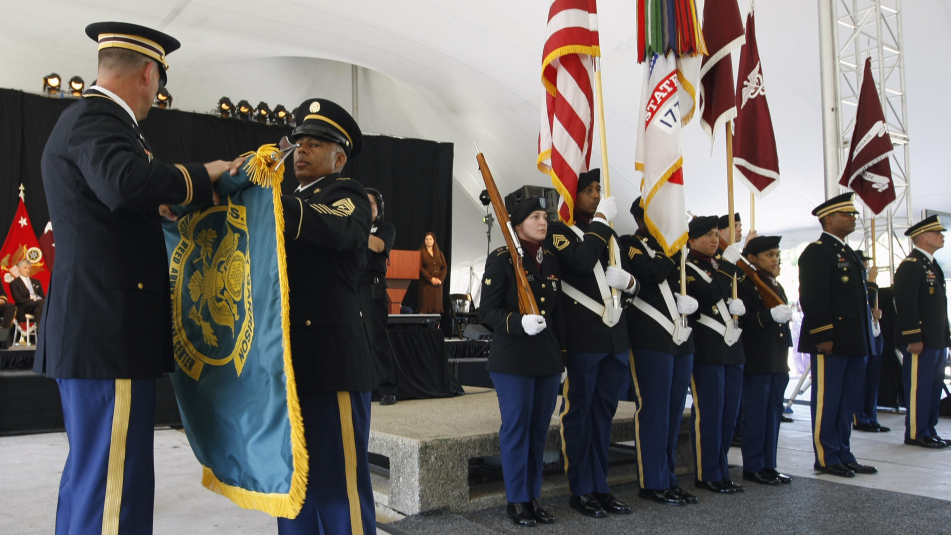 When the Walter Reed Army Medical Center was slated for closure back in 1995, the goals were to improve care for wounded soldiers, and to save money. The final patients left this past week.

But with closing Walter Reed now estimated to cost more than $1 billion more than originally predicted, it could take many years before the military will realize any savings.

The medical center has acres of tall oaks and several large buildings, on a campus in the middle of Washington, D.C. The original hospital at Walter Reed is known as Building 1. It's all brick, with massive columns and an ornate fountain out front.

"You certainly get a sense of history from seeing Building 1," says Brian Lepore of the Government Accountability Office.

Working for the financial watchdog arm of Congress, Lepore knows a lot about how the government spends its money. He has overseen about a dozen reports on the closures of military facilities, including Walter Reed.

Still, when he enters Building 1 and notes the architecture, he says, "There's no question about it: It's really quite fascinating."

The estimated cost to realign Walter Reed Army Medical Center with the National Naval Medical Center has risen 245 percent since the original 2005 projection, mostly due to increased construction costs.

We climb the granite stairs, open the heavy wooden doors, and head inside.

"I've never been in this building," Lepore says. "This is beautiful."

It is beautiful, with chandeliers and marble floors. But as a military hospital, it's also impractical.

With rows of brick buildings lining a wide, sloping lawn, the place has the feel of a college campus. There's also a large concrete hospital building, dating to the 1970s.

Lepore can only shake his head.

"You get to the point with some old buildings, where the cost to maintain them does become cost prohibitive," he says.

That's why it makes sense to start over with new construction. As Lepore says, "One of the key savings you achieve from a given recommendation is spending less to maintain a new building than an old one."

A big reason for closing Walter Reed is to make the hospital more efficient and save money. Shutting Walter Reed, and shifting it across town to Bethesda and other locations, will save $172 million each year.

But here's the problem. The cost to close Walter Reed and rebuild it elsewhere has gone up — a lot.

To learn how a base closure could triple in cost, I spoke with Todd Harrison, a defense analyst with the Center for Strategic and Budgetary Assessments.

Asked whether someone made a mistake in the original estimate, or if this was simply a case of bad luck, Harrison says, "I think it's a combination of factors. Going back to 2005, when they made their initial estimates of what it would cost to move all the functions from here, they did their best estimate at the time. A lot of things have changed since then. Construction costs have gone up."

The GAO agrees that the Walter Reed project tripled in price mostly because of a rise in construction costs.

New medical facilities had to be built — everything from operating rooms to parking garages. The price tag skyrocketed back in 2005, when a huge amount of building materials went to the Gulf Coast in the wake of Hurricane Katrina.

It was simply supply and demand, says Vice Adm. John Mateczun, who oversees military medical facilities for the Washington region. 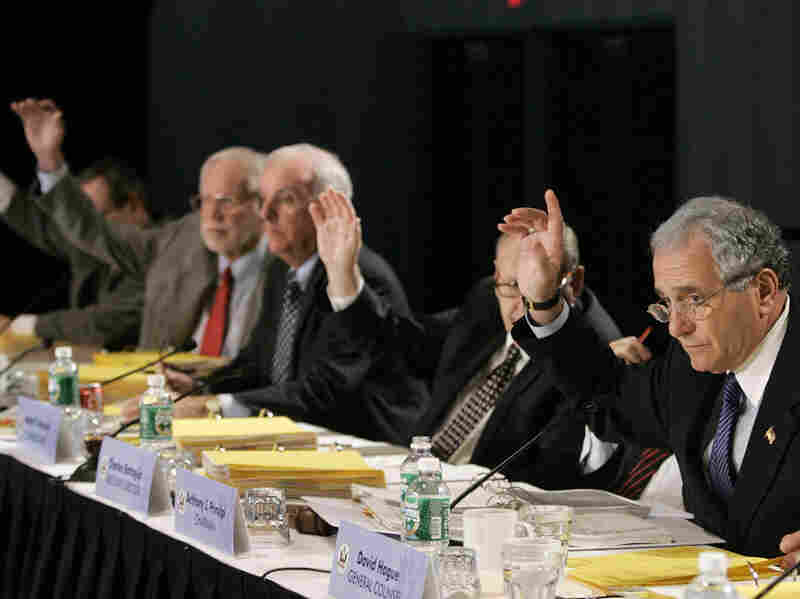 BRAC Commission Chairman Anthony J. Principi, and other member of the commission raise their hands in favor of closing Walter Reed Army Medical Center in Washington during a base closing hearing Aug. 25, 2005 in Arlington, Va. Mark Wilson/Getty Images hide caption 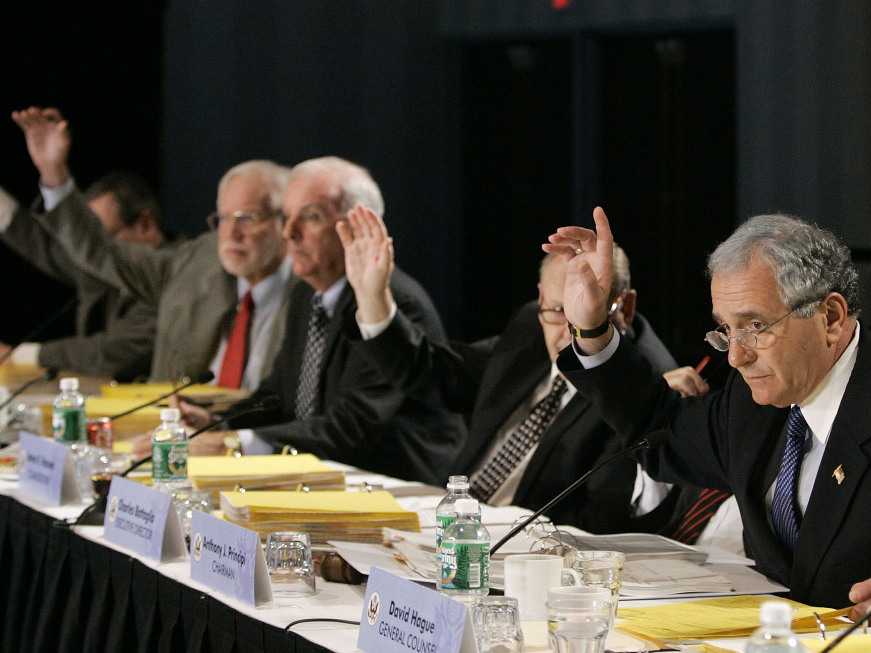 BRAC Commission Chairman Anthony J. Principi, and other member of the commission raise their hands in favor of closing Walter Reed Army Medical Center in Washington during a base closing hearing Aug. 25, 2005 in Arlington, Va.

"The price of steel went up fairly dramatically, and that's at the time they had to buy steel," he says. "So there was a fairly high increase to those original estimates."

Remember, the savings each year were supposed to be about $172 million.

"Right now, we do not expect DOD to hit the payback period — that is, the period at which the full amount of the investment has been recouped, and you're achieving savings — until about 2018," says Brian Lepore.

In other words, seven years after the federal government was predicted to start saving money, in 2011.