Accessibility links
Ruth Reichl: Dining In Disguise And Going 'Gourmet' Food writer Ruth Reichl famously went undercover to review restaurants for The New York Times. In a series of interviews on Fresh Air, she discusses her formative food experiences, her restaurant reviews and her tenure at Gourmet magazine. 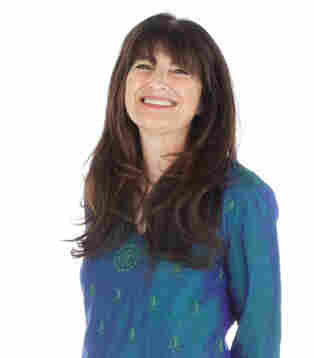 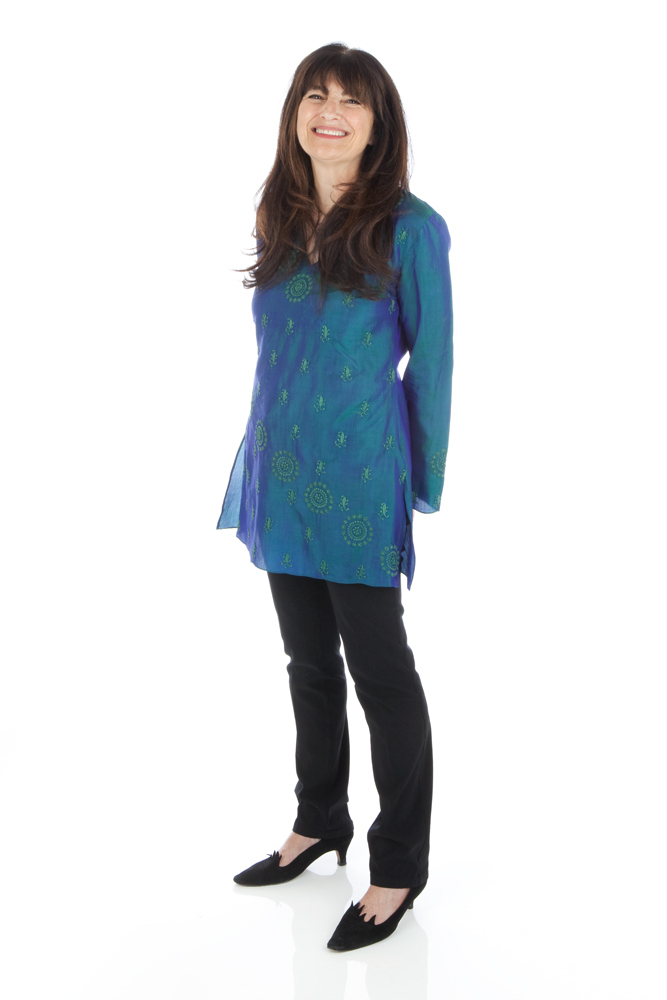 Before she took the helm at Gourmet magazine, Ruth Reichl won two James Beard Awards for her work as restaurant critic for The New York Times.

After years of wearing disguises in restaurants so she could review them for The New York Times without being recognized, Ruth Reichl left her position as the Times restaurant critic to become the editor-in-chief of Gourmet magazine. She served at the helm of Gourmet for a decade until 2009, when Conde Nast announced it was stopping the publication of the magazine that had been in print for 68 years.

Shortly before the magazine's final issue hit newsstands, Reichl joined Fresh Air's Terry Gross for a discussion about Gourmet's legacy and some of her favorite recipes. She told Gross that the magazine's end was a complete shock to the editorial staff.

"None of us saw this coming," she said. "You know, we knew that ads were bad. ... There was no arguing that the ad picture had been really dismal. But ... this is a magazine that had a circulation of almost a million and [had] devoted, devoted readers, and it has been an icon. ... I just couldn't imagine that the magazine itself would go away."

Since 2009, Reichl has hosted a cooking show on public television as well as a series of speaking engagements about food writing. She also regularly appears on a live monthly food show on WNYC and is the author of numerous books, including a trio of memoirs about her childhood and food memories.

Reichl has appeared on Fresh Air three times over the years to discuss her food writing, as well as some of her favorite recipes and favorite food memories. Some highlights from interviews appear below.

Undercover Restaurant Critic May Be Unmasked

Undercover Restaurant Critic May Be Unmasked

On her mother's sense of taste

"Her taste was extremely limited. The first story in the book [Tender at the Bone: Growing Up at The Table] is about her waking my father up early in the morning and putting something into his mouth, and having him taste it. He said it was the single most disgusting thing he had ever encountered. He really couldn't swallow it and he spit it out, at which point my mother said: 'Mm-hmm. Just as I thought. Spoiled.' "

On becoming a food professional

"I really felt that I was sort of shaped by my mother's handicap. The way the children of deaf people are probably more aware of sound — I became very aware of taste because I was so fascinated by the fact that my mother couldn't taste these things. ...

"My mother really would make these dreadful concoctions. She really prided herself on something called 'Everything Stew,' where she would take everything in the refrigerator, all the leftovers, and put them all together. One day I was watching her put in leftover turkey and broccoli and a little can of mushroom soup. And she's throwing things in. And half an apple pie goes in. ... I'd sort of look at her and say: 'Mom!' And she says: 'Oh, it'll be fine.' ... In defense, I started cooking, because I didn't want to eat that."

"For instance, if a customer wanted to send a steak back because it was cooked too much, [the waiter] can tell the chef that the customer says it's overcooked. And [the chef is] going to scream and yell 'cause he's at war with the customer. On the other hand, if you [as the waiter] go back and you're very humble and you say: 'I made a terrible mistake. He said that he wanted it rare, but I wrote down well done.' He'll scream at you, but he'll give you a new steak because he's not at war with you." 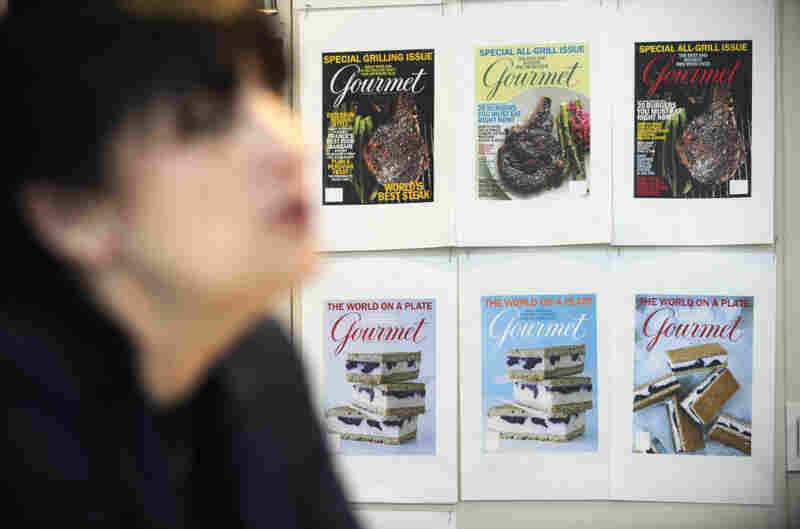 Gourmet wasn't just a magazine about recipes, Reichl says; it was a magazine about the culture of food. She is shown above in her New York office in April 2009. Richard Drew/AP hide caption 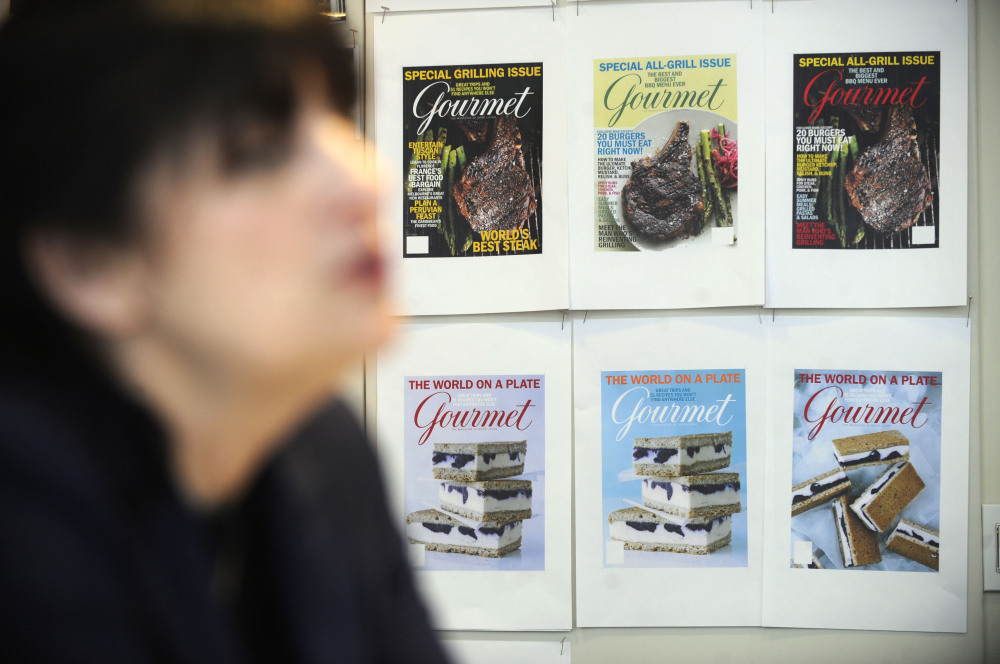 On foods going in and out of fashion

"Lobster used to be very luxurious food, very expensive, [but] lobster has become much more available. I mean, you can buy lobsters in the supermarket from a tank. Anybody can. And so it was a hallmark of a very expensive restaurant in the '40s, and I think it went out of fashion because it was not so complicated or expensive, or it no longer denoted the most sophisticated thing you could get, and so restaurants moved on to more difficult, more complicated, more expensive foods."

On interesting recipes during Gourmet's lifetime

I personally think that a world with no carbohydrates is a pretty sad place.

"My biggest surprise [recipe] from the '40s was a salad with a butter dressing. It's melted butter, and it sounded horrible to all of us — and I love butter. I mean, butter is probably the thing that I would least like to do without, of all the foods on Earth. But the idea of butter lettuce covered with butter dressing sounds really gross to me. It's wonderful. It's just wonderful. And that is truly a surprise."

"We have a history of, you know, first we eat only grapefruits. Then we decide that eggs are terrible for us, and now eggs are good for us. ... We go back and forth all the time, and there's always some diet craze that's on the best-seller list. I can't remember a time in my lifetime when there wasn't some diet that everybody was saying: 'You have to eat this.' They always go away, and they get replaced with something else. But sensible people still have to eat and cook, and I personally think that a world with no carbohydrates is a pretty sad place."

On tiny diners or coffee shops

"I love the daily ritual of it; I love that becoming part of a community. For me, that's one of the things that's so great about restaurants — is that it is a way for you to have a life outside of your ordinary life where you are known, but you're known in just that small corner. It's very comforting to go in on a regular basis and have that sort of three- or four-time-a-week conversation with someone and to feel like you are recognized."

I think the most important thing you can do for your children is sit down to dinner together.

On dining with her son

"The one thing that I feel as a mother is the most important thing — and it's why I ultimately stopped being a restaurant critic and took a job where I could be home cooking dinner every night — is that I think the most important thing you can do for your children is sit down to dinner together. We have breakfast and dinner every day with my family. I don't think it matters what you put on the table or how you get that food on the table. I don't think it matters whether you cook it yourself or you order in. But I do think it's important to sit down and eat dinner with your children."

On what separated Gourmet from other food magazines

"I think I would have said how proud I was of this magazine and how proud I was of this group of people. Working there, it was the best job I've ever had. One of the great things about Conde Nast is that ... when they trust you ... they completely let me do the magazine I wanted to do and hire the people I wanted to hire. There was no second-guessing anything that I did for 10 years, and it was an extraordinary kind of freedom. And it was a wonderful group of people that I was working with — it was a very collaborative process."

If it's 4 o'clock and you're in your office and you haven't figured out what you're having for dinner tonight, the battle's half lost.

"The odd thing about fish is that they go in and out of sustainability. So something that is OK to eat today may not be three weeks from now. So the first thing is just to go there and look. And the second thing is to go to your fish market and ask a lot of questions: Where was this caught? How was it caught? And I think it's really important for us all to be very vigilant about doing this. If they're selling something that shouldn't be there, like Chilean sea bass, which is really endangered, ask them: 'Why are you selling this? You shouldn't be selling this.' I mean, do you want to be the person who sells the last piece of Chilean sea bass on the face of the Earth?"

On cooking for her family

"What I would do was on the weekends I would take, you know, a couple of hours on Sunday to figure out what we were doing that week, and I'd shop for it. When I got home, I knew what I was going to cook and everything that I needed to cook was there."