Accessibility links
Some U.S. Farms Trade Tobacco For A Taste Of Africa In states like Maryland, where agriculture was once dominated by tobacco, farmers are experimenting with new crops like African hot peppers. Local African immigrants come to pick the vegetables and spread the word.

For the past 10 years, farmers in tobacco-growing states have been slowly saying goodbye to that old leaf in favor of other crops.

Of course, there's lots of corn and soy replacing tobacco, but some farms are testing out specialty crops that appeal to recent immigrants.

George Bowling's farm in southern Maryland is one such place. He started growing African vegetables about a year ago, but he has worked on farms growing corn and tobacco for much of his 70-something years. 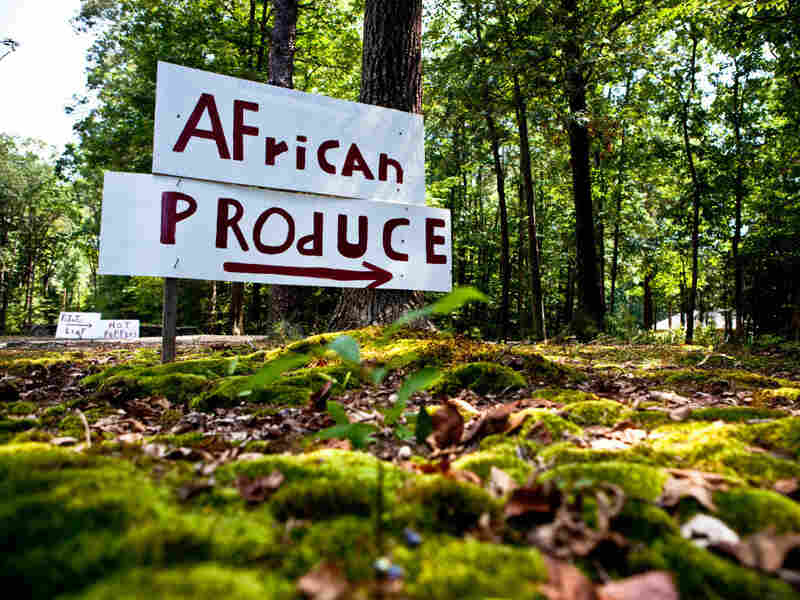 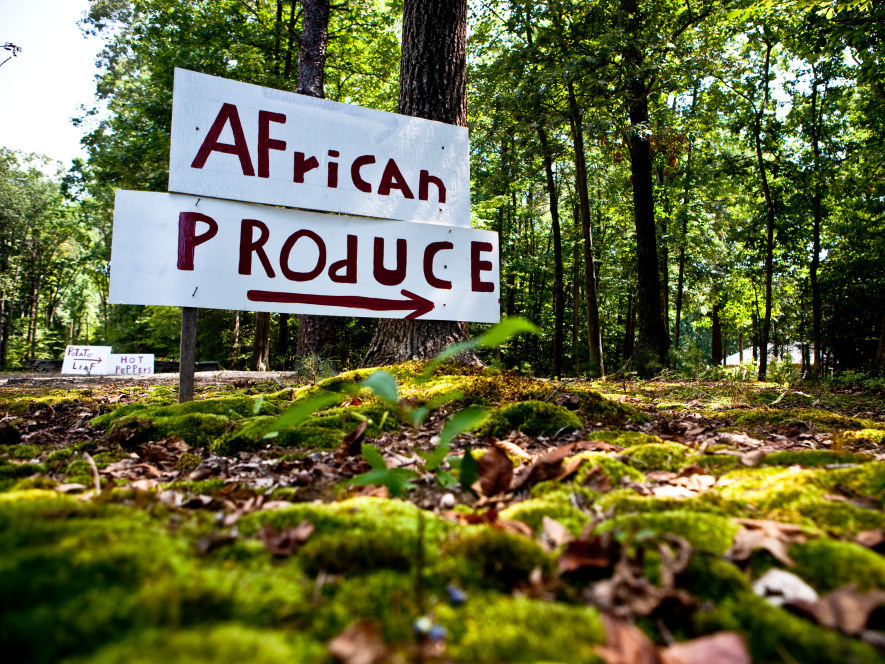 The only sign suggesting that you've arrived on the property is a simple white wooden one. It says "African produce" in red letters, painted by hand.

Bowling took me on a tour of his fields on a steamy mid-August day.

"I've had the African eggplant, I've had the hot peppers, yellow tomatoes, red tomatoes, okra, and potato leaves, watermelon, cantaloupe," he says, pulling his dusty baseball cap down to shade his eyes.

This year, seven acres of his 60-acre farm were dedicated mainly to new African crops he hadn't planted before — something of an experiment, he says.

A Request For Sweet Potato Leaves

Bowling's wife, Julia, says they started researching African crops after some customers asked for sweet potato leaves to cook with.

"We'd never heard of anybody that ate sweet potato leaf, and when we plowed our sweet potatoes last year, that's when they first started coming in," she says.

Sweet potato leaves are used like spinach in many cultures, added to a stir fry or an African stew.

Customers asked Bowling to plant African produce and said they would come to pick it, she says, so he gave it a shot. He ordered specialty seeds for vegetables like "garden eggs" — tiny green African eggplants — and chocolate habanero peppers, and planted them.

And now many customers come to Bowling's farm, picking 16-pound bags of hot peppers at a time. They load up their cars, drive home, tell their friends and come back for more. It's mostly word-of-mouth marketing.

If you can find these peppers at a specialty market, they are often expensive or dried out, says Gladys Fontem, who is originally from Cameroon. She wears surgical gloves to protect her hands while picking the hot peppers. She comes to pick, she says, because the peppers here are fresh, and the farm is clean.

"You can't cook without peppers," says Fontem. "We love that spicy stuff."

But there's another reason they come, according to her sister, Ara: "It gives us a taste of home. The smell, the fields — it's like we're back home."

There's a big market for African crops in the D.C. area. Nearly 120,000 people born in Africa live in the metro area, according to the U.S. Census.

In other parts of the country, the foods of home are different. 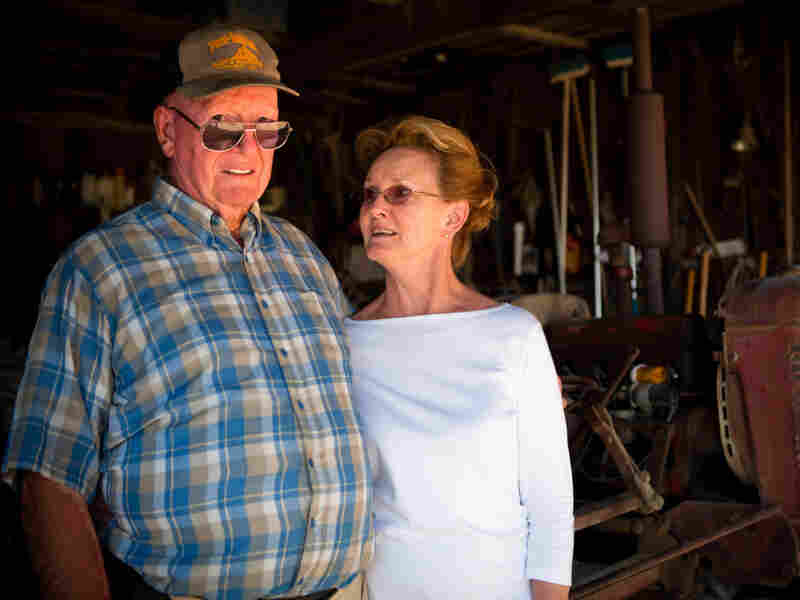 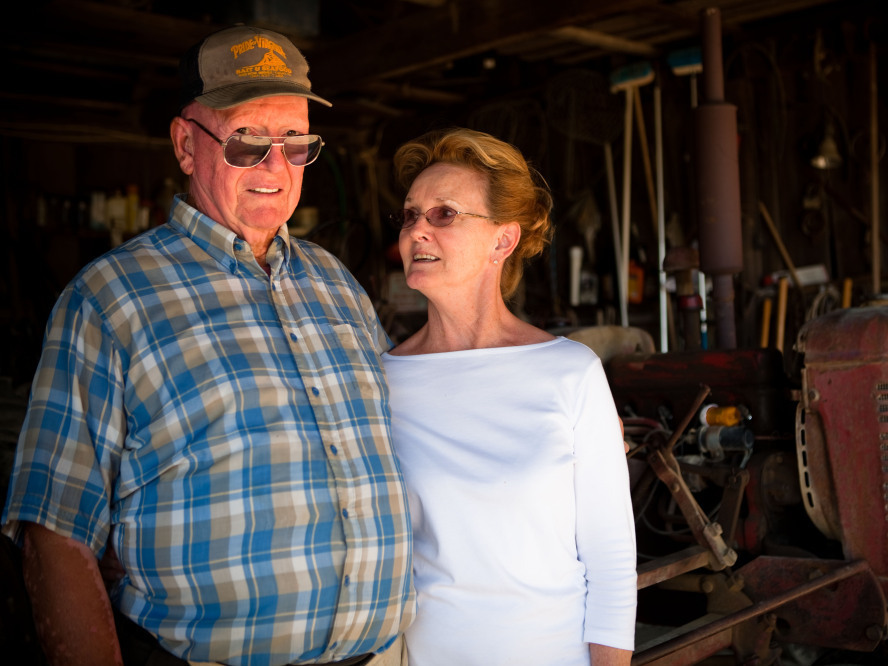 Maryland farmer George Bowling and his wife, Julia. She says they started researching African crops after some customers asked for sweet potato leaves.

A recent study by Rutgers showed that the demand for Mexican, Indian, Chinese and Puerto Rican produce is worth more than a billion dollars — on the East Coast alone.

As tobacco taxes have gone up and imported tobacco has flooded the market, many farmers are looking to try new things.

In Maryland, the state gave some farmers an incentive.

In 2000, it offered to buy out farmers who grew significant amounts of tobacco if they promised to stop growing tobacco but keep their land in agriculture for 10 years. More than 80 percent took the offer, according to Christine Bergmark of the Southern Maryland Agricultural Development Commission, the agency that administers the tobacco program.

So some farmers are trying out wine grapes, some are giving public farm tours and Halloween hayrides, and some are testing African and other specialty ethnic crops.

African crops are fairly new, but they are not just limited to the ethnic market. Some farmers are even starting to take their products to urban farmers markets and high-end restaurants.

Crops Adjust To A New Climate

Yao Afantchao came to Maryland from Togo about 20 years ago. He missed the taste of home and brought seeds with him to experiment. He tried peppers and melons, and more exotic things like edible hibiscus and jute leaves. Turns out they grow fairly well, but they take some adjustments.

"We have few problems. We have a weather problem. This is a temperate zone, and so the growing period is shorter," he says.

Eventually, the University of Maryland hired him to help set up a program that would educate farmers about how to grow the crops and find markets.

He still works with several Maryland farmers, as well as with city garden farmers through the University of the District of Columbia.

But farming is not easy work, no matter what is growing. With the hot, rainless July and the downpours of August, it's been tough, says farmer Bowling. He lost a field full of cantaloupe.

"A total loss almost," he says, pointing to the withered vines. "But that's farming."

Still, Bowling doesn't miss tobacco. Even though he says he's retired, he puts in 15-hour days now. I ask him if he makes any money.

"I probably got a net return of a dollar an hour now ... this is a lot of hard work and kind of a minimal return," he says.

"I just love dealing with people," he says.

He also loves the farm, and this area — Charles County — where he grew up.

"We've got it all — we've got mountains in the back, [the Chesapeake] Bay on the East, Potomac River there, I can go to the bay and fish and crab, I mean, what else could you want?"