Accessibility links
Training Afghans To Take Over Bomb-Defusing NATO and U.S. forces are training Afghans to take over the task of combating improvised explosive devices — the Taliban's weapon of choice and the leading killer of civilians and soldiers in the Afghan insurgency. 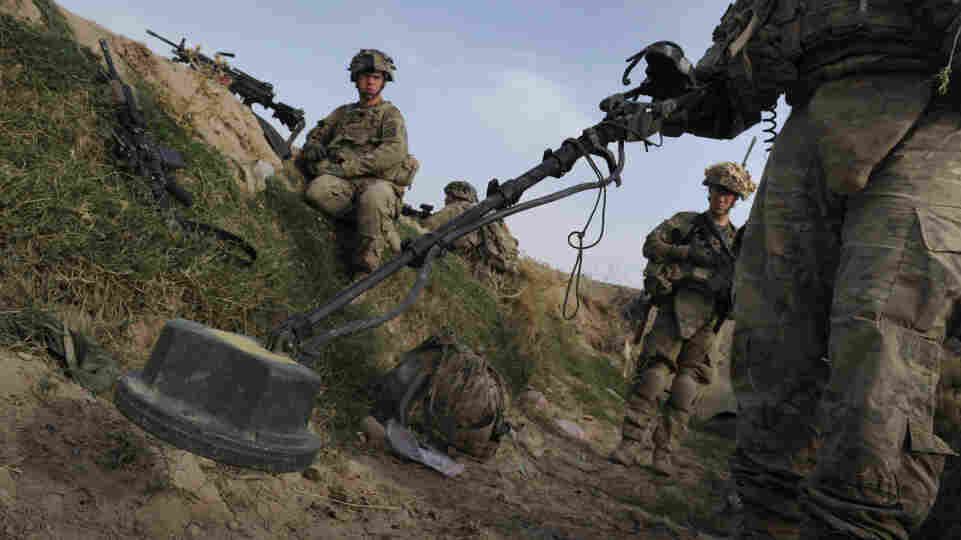 U.S. soldiers check for land mines on a canal running through Highway 1 in Afghanistan's Kandahar province, Aug. 6. Improvised explosive devices, or IEDs, are the Taliban's weapon of choice and are the leading killer of civilians and soldiers in Afghanistan. Romeo Gacad/AFP/Getty Images hide caption 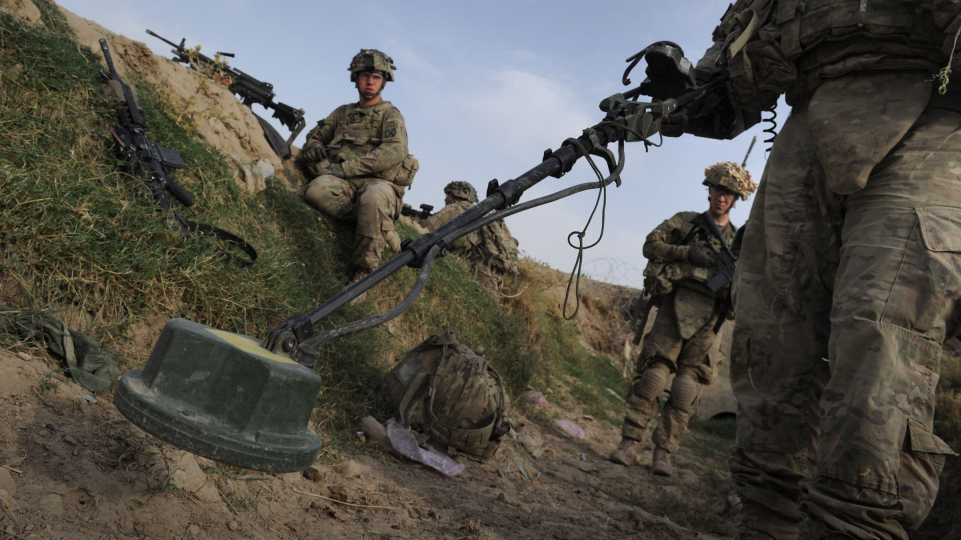 U.S. soldiers check for land mines on a canal running through Highway 1 in Afghanistan's Kandahar province, Aug. 6. Improvised explosive devices, or IEDs, are the Taliban's weapon of choice and are the leading killer of civilians and soldiers in Afghanistan.

August brought a grim new statistic from Afghanistan: The death of at least 66 U.S. soldiers, making it the deadliest month for U.S. troops in nearly 10 years of war.

Nearly half of those casualties were the result of the rare shootdown of a Chinook helicopter packed with U.S. Navy SEALs. Of the remaining casualties, many were caused by what the military calls improvised explosive devices, or IEDs — homemade land mines, bombs and booby traps.

Meanwhile, NATO and U.S. forces are training Afghans to take over the daunting task of combating the Taliban's deadly weapon of choice — and the leading killer of both civilians and soldiers in the Afghan insurgency.

In the northern city of Mazar-e-Sharif, a British defense contractor, Mick Owen, is teaching Afghan soldiers how to drive remote-controlled cars.

"For Westerners, it's a little bit easier. The guys here, they've never played with a remote-controlled car, never played on a computer. It's more difficult because they're not used to that kind of thing," he says. 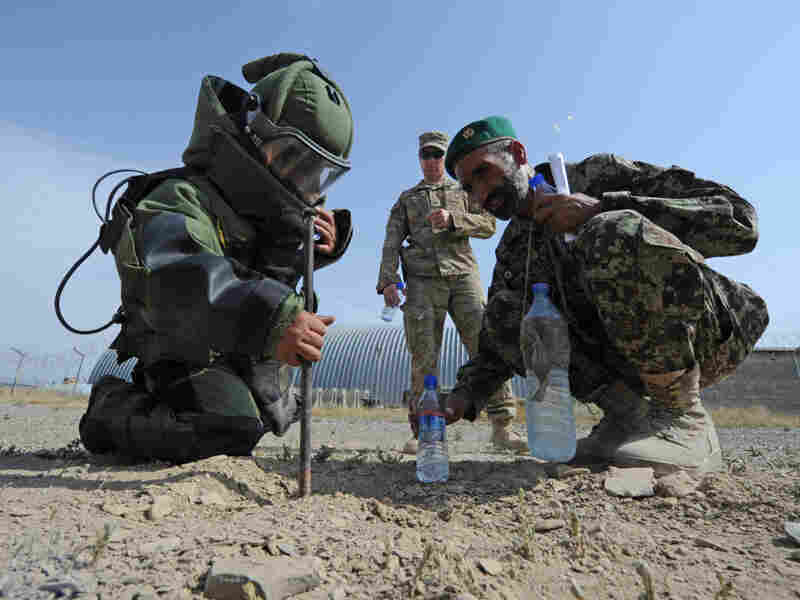 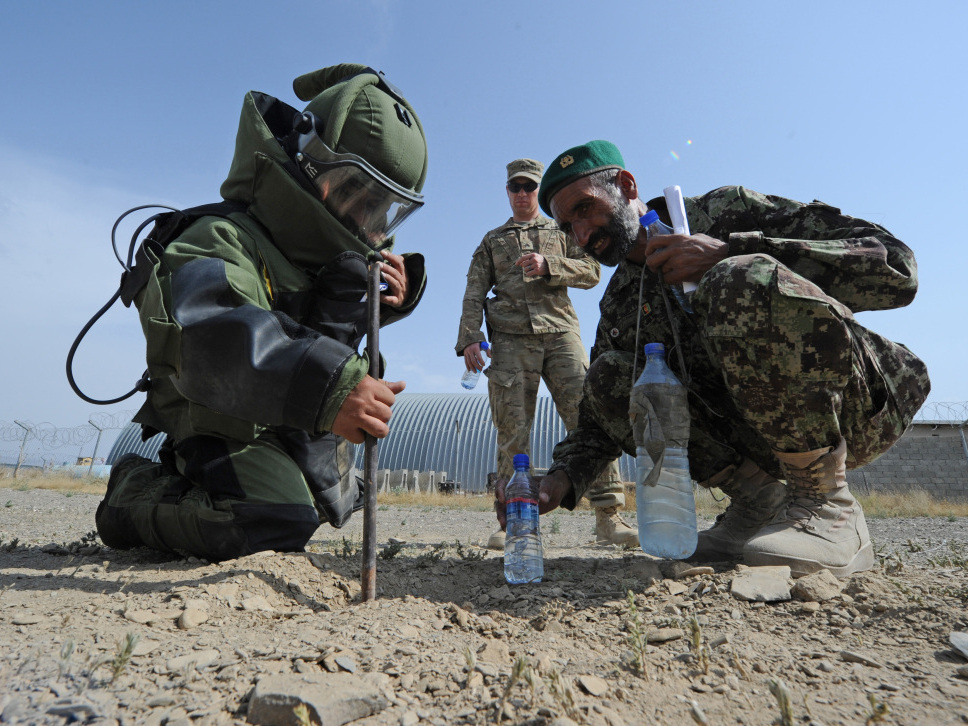 The remote-controlled robot is no toy. It has thick rubber treads, an extendable arm with a clamp, and video cameras so the driver — ideally an Afghan soldier standing a safe distance away and taking cover — can disable a land mine or booby trap.

A similar robot was featured in the movie The Hurt Locker. De-miners and bomb squads have used them since the 1970s in places such as Northern Ireland.

Handpicked Afghan soldiers and police from across the security forces are enrolled in the course on detecting and defusing IEDs.

The Afghans have decades of experience with land mines. Some of the skills translate — and so do the risks, says Noor Hameed, an Afghan explosive ordnance disposal, or EOD, teacher.

"We have a saying: 'The first fault of the EOD man is the last fault of his life,' " he says.

But IEDs are more sinister than the leftover land mines Afghanistan has dealt with for so many years. They are deliberately concealed in areas of heavy military traffic, which are often used by noncombatants as well.

According to the United Nations, a third of all civilian casualties in Afghanistan are now caused by insurgent IEDs — a 17 percent increase since 2010.

NATO is training Afghans such as Lal Afgha to become the teachers of counter-IED courses. Agha says the insurgents are afraid to fight head-on with American or Afghan soldiers, so they use IEDs.

"The IED is a very effective weapon now for the Taliban. Because they don't fight the Afghan national army face to face, the IED method is the best method for them," Agha says. "It is very easy, and it has a very good effect."

Challenges Will Only Grow

There is growing concern that as U.S. troops draw down, Afghans may not be up to the task of countering IEDs. That's not least because the U.S. hasn't managed to defeat the weapons, even after devoting about $17 billion over five years to the task. With each countermeasure, the insurgents adapt within months, and IEDs continue to kill and maim U.S. soldiers at as high a rate as ever.

With each generation of armored vehicles, insurgents in Afghanistan have increased the size of their bombs, mostly made with materials smuggled from Pakistan. The bombs often have no metal parts, to avoid detection.

When U.S. troops leave, Afghans will never be able to match such costly efforts — but Agha says he's hoping they won't have to.

"When, if they solve the political problem with government, I think it will solve [the problem of] the IED," he says.

Agha hopes a political solution will end the war, and the IED threat with it.