Accessibility links
Perry Revives Social Security 'Ponzi Scheme' Rhetoric Back before Texas Gov. Rick Perry threw his hat in the presidential ring, he referred to Social Security as a "Ponzi scheme." His campaign had tried to distance the new candidate from that language, but last weekend Perry himself waded right back in. 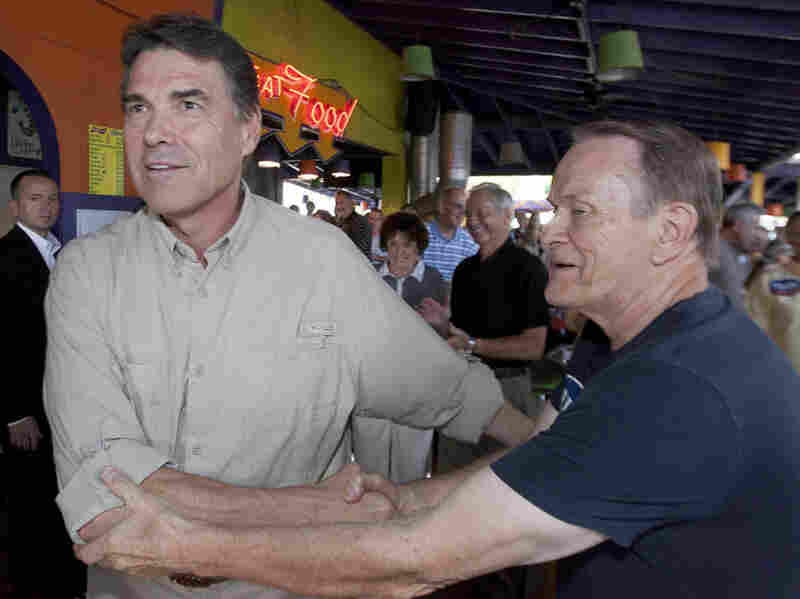 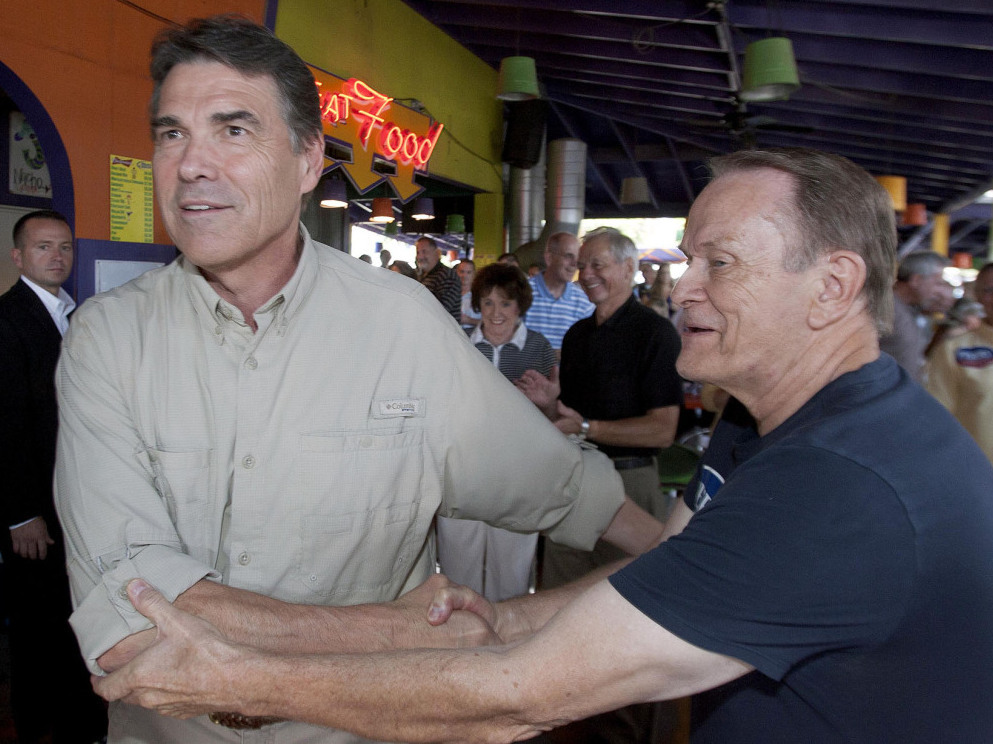 When Texas Gov. Rick Perry was asked about Social Security during a campaign stop in Ottumwa, Iowa, last weekend, he didn't mince words. He suggested that younger workers who are required to pay into the retirement system are the victims of a government swindle.

"We need to have a conversation with America, just like we're having right here today, and admit that is a Ponzi scheme for these young people," Perry said. "The idea that they're working and paying into Social Security today, the current program, that it's going to be there for them, is a lie."

Perry used similar "Ponzi scheme" language to describe Social Security in Fed Up, the book he wrote last year. A campaign spokesman tried to soft-pedal that view in an interview with the Wall Street Journal this month, noting that the book was written before Perry decided to run for president, and saying it doesn't reflect the governor's current views.

But Perry himself made no such distinction at a weekend appearance in Des Moines.

"I haven't backed off anything in my book. So read the book again and get it right," he said.

Social Security does share one important feature of a Ponzi scheme. The money that today's workers pay into the system goes right back out the door to pay current beneficiaries. That hasn't been a problem for the system so far, but the future presents a challenge. Retirees tend to live a lot longer now than they did in the 1930s. And as Sen. Mark Warner (D-VA) told CBS, there are now fewer workers paying into the system for every retiree taking out.

Warner is part of a bipartisan group of U.S. senators known as the "Gang of Six" who proposed adjustments to Social Security's tax and benefit formula in an effort to shore up its long-term finances. Perry suggested similar tweaks during this weekend's appearance in Iowa.

"We need to decide — are we going to raise the age of eligibility? What's that age going to be that we're going to make the transformation from? And literally have this good, thoughtful conversation about the program and what we really want that program to be," Perry said.

In his book, however, Perry hints at more radical changes, suggesting that Social Security is unconstitutional and arguing that Americans would be better off with private pensions. He acknowledged that it is a politically risky position, but maybe not as risky as it once was.

University of South Florida political analyst Susan McManus notes that, even in the graying sunshine state, nearly half of the voters are now younger than 50. And she says many of them don't believe they'll be getting Social Security.

"It used to be in Florida, you didn't dare come in here and say anything negative about Social Security or Medicare," McManus says. "Now, of course, with the changing age demographic, it seems politicians that are willing to say something about Social Security's possible problems down the way may just get the attention of some of these younger voters."

Rick Perry's Brainpower Questioned; How Smart Should A President Be?

"The reason younger Americans do not believe it will be there is there's been a drumbeat of people like Gov. Perry and others who've been saying for many years the system doesn't work," says Eric Kingson, co-director of the Strengthen Social Security campaign. "It's not going to be there. The fact is Social Security is quite sustainable [and] it requires very modest adjustments."

Indeed, the latest trustees' report says that even without any changes, Social Security could keep paying all of its bills for the next 25 years and fully three-quarters of what retirees expect after that. Kingson suspects Perry's real aim is to dismantle the program and discredit the politics of its creation. In his book, Perry calls Social Security a "a crumbling monument to the failure of the New Deal."

"I think Gov. Perry has never seen a federal program that he likes very much," Kingson says. "He basically believes in a very small government. He believes in states' rights [and] he's very clear about that."

Kingson says that it is a position that should be openly discussed in a campaign, but it should be discussed without "specious analogies" like "Ponzi scheme."

It seems that the national conversation that Perry said he wanted on Social Security is under way.