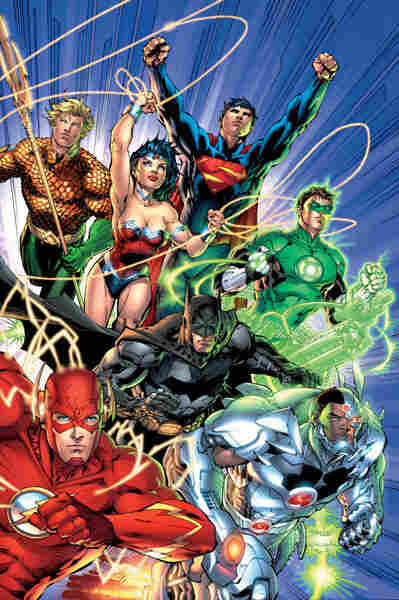 For more about the DC Comics reboot, check out Melissa Block's discussion with DC Comics co-publisher Jim Lee from All Things Considered.

Today, Justice League #1 arrives in comics shops. (It arrives on web servers as well, but we'll get to that in a bit.)

So, it's the first title of DC Comics' grand narrative experiment: An attempt to secure new readers by completely clearing the superhero slate and starting anew. We discussed this move when DC first announced it, but briefly:

Over the next few weeks, the publisher will roll out the rest of its line of 52 different titles, all of which will begin with issue #1 — new (or slightly altered) versions of both iconic and little-known characters, new (or slightly altered) costumes (Wonder Woman Sartorial Update: Jeggings OUT, Star-spangled short-shorts BACK IN), new storylines. (DC Comics co-publisher Jim Lee talked about all of this today with Melissa Block on All Things Considered.)

At the same time, DC is attempting to diversify its offerings, rounding out the capes-and-cowls comics with horror comics, war comics, western comics, etc. They're also making some tweaks to their standing roster of pale male heroes to make it look a scosh less like the syllabus to a Harold Bloom survey course.

So is Justice League #1 any good? Accessible to newbies? Will it boost slack sales and save the industry?

Yep; yep; and what am I, Kreskin, over here?

"Five Years Ago," reads a caption on page one. That's our first clue that DC is setting out to tell the story of its iconic team of heroes before it became iconic.

Over the course of the first few issues, we'll watch various members of the Justice League meet one another for the first time. It's an approach that several previous Justice League mini-series and story arcs have taken, over the years, but what's different here is what Justice League #1 represents: The vanguard of a new approach to the characters that will be taken up by every other title DC publishes.

What's new about this new approach?

Since when is "angry" Superman's thing?

Oy. This is Loonatics Unleashed all over again, isn't it?

I dunno. Understand: It's is a huge initiative, and thus far we've just glimpsed the tip of this younger, angrier, more brash and more modern iceberg.

We get only a glimpse of the new, rebooted Superman in Justice League #1, for example. Most of the issue is devoted to watching Batman and Green Lantern meet, take an instant dislike to each another, and fight off cops and some kind of mecha-alien threat.

Back in the day, the whole "We're Putting the Team Together" storyline used to take place over the course of a few panels in a single issue, but that's not what writer Geoff Johns has in mind. We've got a lot more heroes to meet before the League gets formed — and one of them, the African-American teenager Cyborg, hasn't even gotten around to having his super-origin yet, so.

Are you ... are you baiting me? Look, if it's applied so broadly that it flattens the characters, then yes — sucking will must needs ensue. But at least in JL #1, Johns finds ways to neatly delineate the personalities of Batman and Green Lantern: Batman remains recognizably his taciturn (sliiiightly tooly) self; GL is a braggart, and not the sharpest space-knife in the space-drawer.

But someone who doesn't know Green Lantern from Mr. Greenjeans could pick this comic up and get the gist of what's going on?

Oh, certainly. But will they want to? That's the question that matters.

In hyping the reboot, DC executives have taken to the airwaves — and their own blog — to remind us all that this move is an attempt to "remove the barriers" that keep normals like you from reading — or even sampling — their superhero comics.

The barriers they're talking about there: You can't make sense of decades of complicated continuity (Presto! We start from square one!); you lack familiarity with these characters (Abra cadabra! Here's 52 different jumping-on points!); you'd like to read about 3-dimensional women and people of color (Bippity-Boppity-Booyeah! Meet Batwoman! The Question! Mr. Terrific!).

The barrier they're conspicuously not talking about: You're just not particularly interested in reading about superheroes, thanks.

We'll wait to see more of these books before we can say much about their content, but we can make some safe predictions about their audience.

1. Advance orders for Justice League #1 are well over 200,000 — and it's been a while since numbers like that were common. By itself, however, that number doesn't mean much, as a sizable chunk of it'll be due to the Pavlovian response of collectors and speculators to the words "Issue #1." We'll have to watch the orders over the next few months.

2. I know a great many non-comics-reading normals, and a great many lapsed comics-readers. It's overwhelmingly the lapsed readers who've been pestering me about the DC reboot for the past few weeks. When I tell a non-comics readers about it, on the other hand, I feel like I'm trying to sell an iPhone app to an Amish carpenter.

Still, there are plenty of lapsed comics nerds out there — if this move attracts even a fraction of them back into the fold, sales will experience a bump that, given the slack state of comics retail, will be easy to see.

3. I do worry that an "angrier, more brash" approach to characterization — coupled with news that the Superman who'll be re-introduced in next week's Action Comics #1 will be a "younger, more brooding" version — collectively augurs a return to the bad old days of the 90s, when "grim and gritty" superheroes ruled the day.

[Lengthy, frothing "SUPERMAN DOES NOT BROOD, DAMMIT" rant redacted in the interest of brevity and blood pressure.]

4. There has been much speculation that DC's decision, effective tomorrow, to move to same-day digital distribution of its entire line of comics will greatly expand their audience, even as it undercuts comics shops.

To be sure, downloading comics (via the Comixology iPad app, for example) is easy. And once they're on your device, they do look awfully dang pretty — colors are literally luminous, and the tech allows you to zoom in on a detail or zoom out to get the full impact of a big splash page.

So people who don't live near a comics shop will be able to save themselves a schlep.

But there's much that still needs to shake out. We will save discussion of the wildly incongruous notion of "digital storefronts" and DC's decision to offer "combo packs" — which include both a hard copy of the comic in question, and a code you can enter to download a free digital version of that same comic — for another day.

For now, know that comics shops are worried. Exactly how worried depends on the shop — my local shop owner, for example, holds out hope that readers will soon realize that they prize a comic as a physical object as much as the characters it contains.

(This, in my opinion, represents some downright virtuosic graveyard-whistling.)

But even he says he realizes that comics are a habit, a monthly indulgence that's subject to a customer's disposable income in a time when there's a lot less income to dispose.

So it's officially the Beginning of the End for comics shops, then?

No, we're already past the Beginning of the End. That took place last year (as noted in this space), the first time a major publisher made both a physical and digital version of a given comic available for purchase on the same day.

I like how Heidi MacDonald put it in a crackin' post about the disconnect between physical and digital retail over on the comics industry blog, The Beat. She calls it the Middle of the End:

"I really really want comics shops to be around as long as I am and long after. I love my local [shops], and the many retailers who have nurtured and sustained the comics business. DC made the decision that embracing the future was the only way to be a part of it. I'm optimistic that the comics retailing community will be able to find a way to do the same, even if the way forward isn't immediately visible."

Yeah, so. That sound you hear is a nation of comics shop owners tugging nervously at their shirt collars.