Accessibility links
Walter Reed And Military Medicine's Long War Against Malaria The Walter Reed Army Medical Center is famous for treating both presidents and soldiers. But the institution is also a longtime leader in the fight to develop vaccines, including one against malaria — something many thought wasn't possible. That vaccine is currently in a large-scale human trial in Africa.

Army Maj. Jittawadee Murphy peers into a paper bucket full of freshly hatched Anopheles stephanii mosquitoes. She needs to separate out the females — the only ones that bite — so they can be infected with malaria. 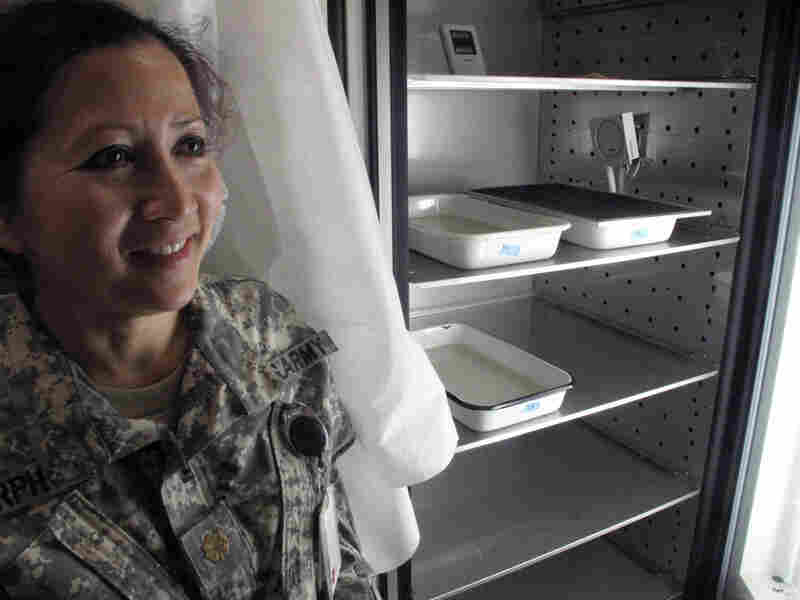 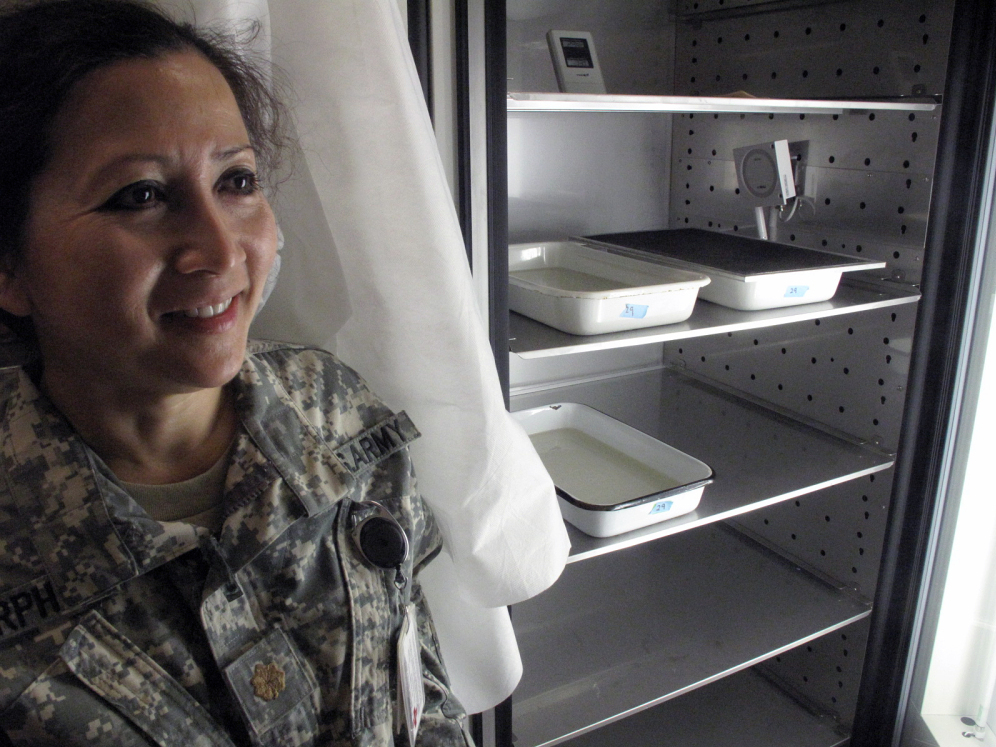 Maj. Jittawadee Murphy, an entomologist, stands near trays of incubating mosquito larvae used to determine whether experimental drugs and vaccines can prevent malaria.

It turns out that sexing mosquitoes is easy.

And once the females make their move, Murphy can suck them up through a straw.

These insects will be presented with some malaria-infected human blood to feast on. And then they'll be allowed to suck the blood of human volunteers — incidentally injecting them with Plasmodium falciparum, the deadliest kind of malaria.

It sounds bizarre, and even unethical. But in fact, over decades this kind of human experiment at the Walter Reed Army Institute of Research has produced an unparalleled outpouring of drugs and vaccines to prevent and treat malaria, one of the world's leading disease threats. It kills nearly 800,000 people every year — most of them infants, children and pregnant women in sub-Saharan Africa.

Deadly as it potentially is, it's not unethical to infect human research subjects with falciparum malaria, because the infection is entirely curable — as long as it's treated within 36 hours after symptoms appear.

After 36 hours, the level of malaria parasites in the blood gets so high that "it becomes a race between how fast the parasites can be killed with medication versus how fast they're multiplying in the blood," says Col. Christian Ockenhouse, who is in charge of developing malaria vaccines at the Walter Reed Institute.

None of the 1,000 volunteers infected in Walter Reed experiments has died or suffered lasting damage from the experiment, Ockenhouse says. 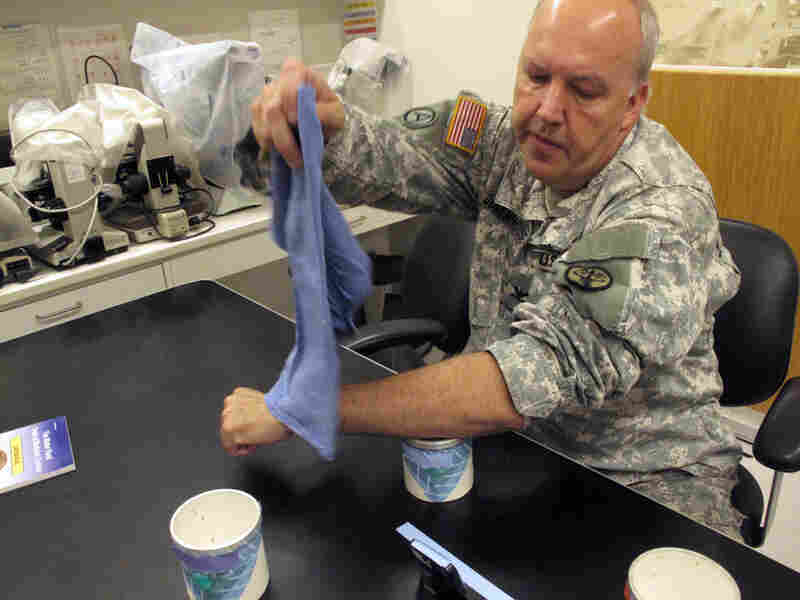 Col. Christian Ockenhouse, director of malaria vaccine research at Walter Reed Army Institute of Research, shows how volunteers are infected with malaria — by holding their forearms over a container holding five malaria-infected mosquitoes. The container is covered with a mesh, allowing the mosquitoes to bite the volunteers. Richard Knox/NPR hide caption 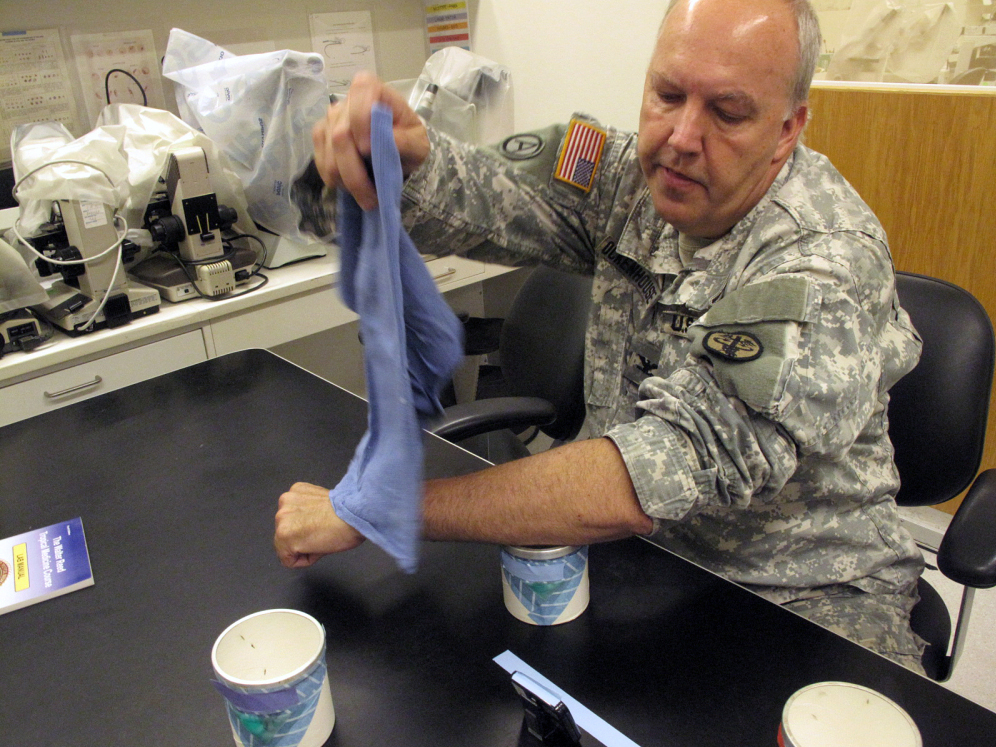 Col. Christian Ockenhouse, director of malaria vaccine research at Walter Reed Army Institute of Research, shows how volunteers are infected with malaria — by holding their forearms over a container holding five malaria-infected mosquitoes. The container is covered with a mesh, allowing the mosquitoes to bite the volunteers.

Most people know "the Walter Reed" as a mammoth military medical center in Washington, D.C., where both U.S. presidents and ordinary war-wounded soldiers get their care.

But as the Walter Reed Army Medical Center decamps from its D.C. campus this month and merges with the Bethesda Naval Hospital five miles away, it's a good time to look at the wider Walter Reed legacy.

The center's Walter Reed Army Institute of Research, housed for the past decade on its own campus in Maryland, just outside Washington, is one of the world's premier research centers for infectious diseases.

No other place has done as much to prevent and treat malaria. And certainly, no one has done it so cheaply.

Ockenhouse says the Defense Department spends only $15 million a year on malaria research — $10 million on drug development and $5 million on vaccines. That's a mosquito-size portion of the DOD's $680 billion budget.

Malaria: A Millennia-Old Foe For Soldiers

Malaria has always been a problem for soldiers. Roman legions had to contend with it. So did George Washington's troops. Civil War battles were won and lost because of it. And it was a huge problem in the South Pacific during World War II.

Professor Dale Smith, a military medical historian at the Uniformed Services University of the Health Sciences, recounts a famous complaint that Gen. Douglas MacArthur made to Dr. Paul Russell, then the Army's top malaria expert.

"Doctor," Smith quotes MacArthur as saying, "it's going to be a very long war if for every division I have facing the enemy, I have one sick in hospital and another recovering from this dreadful disease."

During the war, the Japanese controlled the world's supply of quinine, the standard anti-malaria drug at the time — most of which came from Japanese-occupied Indonesia. So the Americans muddled through with a drug called Atabrine. But it wasn't a great drug. It famously turned soldiers' skin and eyes yellow, had other nasty side effects — and was (incorrectly) rumored to cause impotence.

So Walter Reed scientists launched a successful effort to find new malaria drugs. At the time, it was the largest campaign ever launched to find new drugs.

Then, the war ended. And so did the U.S. military's interest in malaria.

"By early 1946, the entire malaria drug development program was discontinued," Magill says. "People went home, they went back to their jobs. And like someone turned a light switch, that program ended."

Malaria was a bit of a problem in Korea. But it came roaring back as a major military headache in the Vietnam era.

In the first big clash between U.S. and North Vietnamese forces, the battle of Ia Drang Valley in 1965, malaria was almost as big an adversary to both sides as the enemy's soldiers.

By then, Army medics had a drug called chloroquine that had been introduced in 1947, a result of the wartime program. (U.S. researchers were lucky enough to stumble upon the Germans' recipe for chloroquine among the records left behind when the Americans liberated Tunisia.)

But Magill says that by the mid-1960s, malaria parasites in Southeast Asia had grown resistant to chloroquine.

"It was a devastating time," he says. "We literally introduced a half-million non-immune Americans into Vietnam facing chloroquine-resistant falciparum malaria. And of course, all we had was chloroquine."

Walter Reed scientists came to the rescue. Another crash campaign produced a whole slew of new anti-malaria drugs — something drug companies weren't eager to do, because the disease just wasn't important in the developed world.

An Adapting, And Complex, Adversary

Malaria drug development is no less important today, because the malaria parasite has developed resistance against every new drug scientists have thrown at it.

And now, malaria in Southeast Asia is developing resistance to the current final bastion against the parasite, a class of drugs called artemisinins, which come from a Chinese herb.

Magill says that's alarming. "If we were to lose that class of drugs, we don't have an obvious candidate for a backup," he says.

That possibility has increased the urgency to develop the ultimate weapon against malaria: an effective vaccine.

Many have said it would never be possible. Malaria parasites are by far the most complicated organisms that anybody has ever tried to vaccinate against. They're far more complex than viruses or bacteria.

But back in the 1980s, Walter Reed researchers produced the first glimmer that a vaccine against malaria could work.

That launched several years of dogged research that continues today, with the help of volunteers willing to risk getting malaria to test each new experimental vaccine.

Army Spc. Navdeep Saini is one of the human guinea pigs involved in the new research.

"I'm originally from India — northern India, it's called Punjab," he says. "I've seen a lot of people suffering, having this malaria. And I've seen a lot of kids dying from this disease. So that was a big motivator to participate — to help science get these vaccines out, and help those people back home."

Once again, the research has paid off. A vaccine that came out of Walter Reed is now in the final stages of a human trial involving nearly 16,000 children throughout sub-Saharan Africa. It's the first malaria vaccine ever to reach this advanced stage.

Results are expected later this year. In earlier smaller trials, the vaccine was 40 to 50 percent effective in preventing malaria. That's good enough to save millions of lives.

In combination with anti-malarial drugs, insecticide-treated bed nets and mosquito control, even a partially effective vaccine might get the world over the hump toward the ultimate victory of eradicating malaria.

"The U.S. military requires an 80 percent effective vaccine — at least 80 percent," Ockenhouse says. "Because to lose even 10 percent of individuals to the mission is really unacceptable."

So the day after we visited the Walter Reed Institute's "insectary," as the insect factory is called, Ockenhouse began a trial of a new, tweaked version of the vaccine. "We'll know in a year if it works," he says.