Accessibility links
Texas Wildfire's New Path Helping Firefighters Texas is enduring its most severe drought since the 1950s, with bone-dry conditions made worse by weeks of triple-digit temperatures in many cities. Blazes have destroyed more than 5,470 square miles since mid-November, the typical start of the wildfire season. 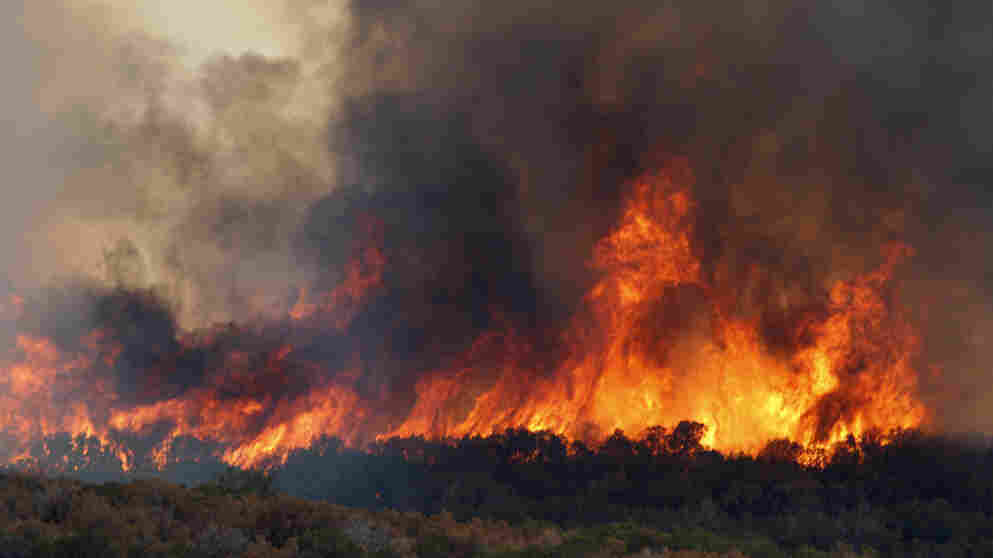 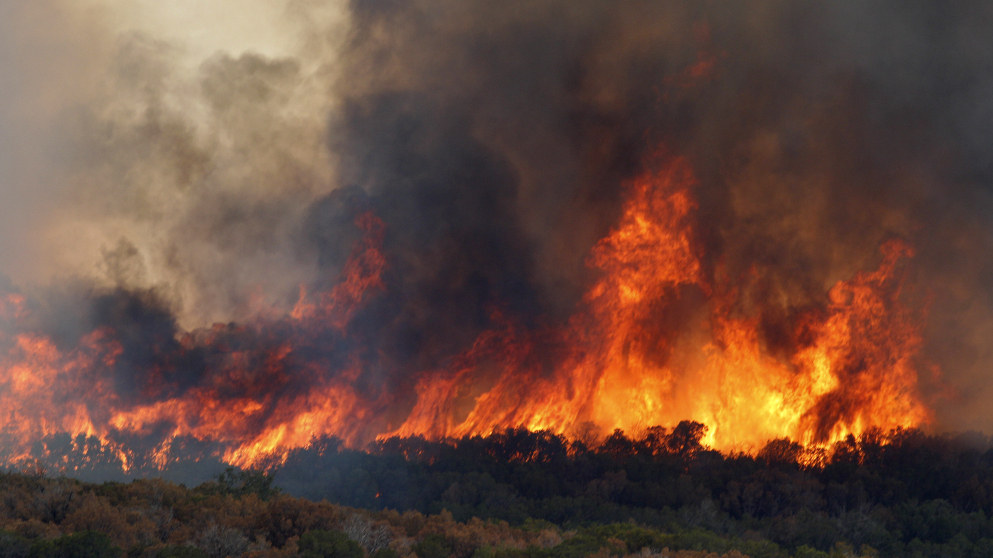 A wind-whipped wildfire that destroyed more than three dozen cliff-top homes in North Texas was expected to burn through most of the tinder-dry trees and shrubs in its path by daybreak Thursday, helping firefighters contain the late-summer blaze during the state's severe and seemingly endless fire season.

The blaze was threatening as many as 400 homes in the Possum Kingdom Lake area and had scorched about 6,200 acres, fueled by high winds, parched vegetation and unrelenting heat gripping the drought-stricken state. But after the fire moved to flatter ground Wednesday, it was expected to scorch the remaining trees and be easier to contain, Texas Forest Service spokesman John Nichols said.

"We anticipate the night shift will get a good handle on this fire," Nichols said late Wednesday.

The fire, which has caused no major injuries since it began Tuesday, has destroyed at least 39 homes and possibly more, he said. Although it hasn't reached the destructive heights of an April blaze that destroyed 160 homes here, the fire suggests that Texas is heading toward its third year-long wildfire season since the 2005-2006 season.

After losing her home during the April fire at Possum Kingdom Lake, Kathy Lanpher was stunned when she heard Tuesday that another wildfire threatened the nearby subdivision where she had relocated in the lakeside community, about 75 miles west of Fort Worth.

The real estate agent raced to her condo, grabbed a few belongings and — hearing that flames had cut off the road to safety — headed to the marina, where she and dozens of frightened neighbors eventually made it to safety by boat. Although the fire missed her condo, the danger had not passed as the blaze spread Wednesday.

"Honestly, I was thinking, `I don't think I can go through this again,'" she said, her eyes welling with tears. "I have my moments and then I move forward, but I just can't dwell on it yet."

Texas is enduring its most severe drought since the 1950s, with bone-dry conditions made worse by weeks of triple-digit temperatures in many cities. Blazes have destroyed more than 5,470 square miles since mid-November, the typical start of the wildfire season.

Firefighters haven't had much of a break this summer, even after various crews battled what turned out to be seven of the 10 largest wildfires in state history this spring.

Usually the wildfire season wanes in the spring because of rain, greener vegetation and higher humidity, weather experts said. But the state's normally wettest months — April through June — were anything but this year because of the lingering La Nina weather condition that causes below-normal rainfall.

The conditions have become so severe that "normal rain events will have little positive impact on the drought and consequently the fire danger," Texas Forest Service specialist Tom Spencer said.

Spencer said the three year-long wildfire seasons are the only ones the Forest Service has recorded, but there are no records from the droughts of 1918 and the 1950s.

The subdivision that burned this week was the only one in the Possum Kingdom Lake area left unscathed by the April fire, which lasted two weeks. The latest fire left some streets virtually untouched, with homes fronted by lawns that could double as putting greens, but others were reduced to rows of scorched stone fireplaces and twisted metal frames.

"It's devastating, of course, and it's going to take a while to get over, but we're going to carry on," Palo Pinto County Sheriff Ira Mercer said.

Unlike the April blaze, when residents had to be told three or four times before they'd leave the area, those whose homes were threatened Tuesday left as soon as they were warned, Mercer said.

The evacuation went smoothly as people left in their own boats or law enforcement agencies watercraft, Mercer said.

"A little old lady was just shaking. These people were leaving with just the clothes on their backs, and they don't know what's going to happen to their homes and their stuff," he said.