Accessibility links
As Media Lines 'Blur,' We All Become Editors As the online world advances, it's become harder to distinguish news from propaganda. In Blur: How to Know What's True in the Age of Information Overload, Tom Rosenstiel argues that news consumers need to learn to vet information in the same way journalists do. 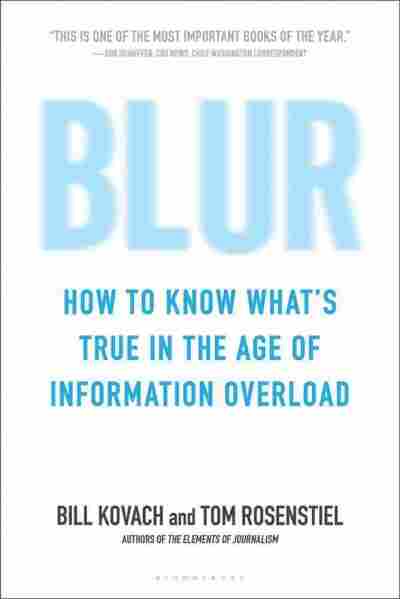 How to Know What's True in the Age of Information Overload

by Bill Kovach and Tom Rosenstiel

For years now, media watchers have warned that the dwindling popularity of traditional media would change how we follow the news. They've predicted that news consumers would need to learn the difference between a credible source and an interested party; where facts stop and spin begins; and what solid journalism is really made of.

What conventional wisdom didn't provide were the tools to ferret out the truth amid the barrage of content on radio, television, the Internet and in newspapers.

In Blur: How to Know What's True in the Age of Information Overload, Tom Rosenstiel and Bill Kovach try to provide some of those tools — many of which overlap with those traditionally used by journalists.

Rosenstiel tells NPR's Neal Conan that while consumers need to be better equipped to vet information, news outlets should also adapt their reporting practices to provide the transparency that readers and listeners demand.

On how we've all become news editors

"Journalists are skeptical observers of the world. And the skills that they have — going out and running around ... [they're] private detectives in some ways — are skills that now all citizens need to employ for themselves. The research shows that a decade ago most people got their news at prescribed times during the day — at the breakfast hour, the dinner hour, during drive time — and when they did that, they got their news from one news organization at a time ... People had a primary news provider.

"That has broken down. We now get stories all throughout the day — all of us — from many sources. And often these are stories that our friends send to us. The majority of adults email stories to one another. We function as our own editors. We create our own news diet for ourselves. We create our own front page, if you will. ... We're no longer relying on seven white males at The New York Times to do that for us."

On distinguishing the different kinds of journalism

"The first question you have to ask is, 'Where am I? Am I listening to a propagandist? Is this a news show? Is it an opinion show? What land am I in?' ... Because journalism itself is no longer this homogeneous product.

"There's a whole bunch of journalism out there that's a kind of neo-partisan press. A lot of talk show hosts ... particularly on cable, and some of the traditional radio political talk show hosts [engage] in what I call the 'journalism of affirmation.' And the reason I call it that is because they make their money and assemble their crowd — their audience — by affirming the preconceptions that the audience brings to the newscast.

"Which is different than the partisan press back a hundred years ago, which was not there to make money. And really wasn't there necessarily to attract a crowd, even. The old partisan press was controlled by the parties and functioned as a kind of nonprofit communications arm. That is not true of the commercial partisan press we see today. If those guys didn't succeed with advertising and revenue, they would be off the air — even if they were very loyal to whatever party interest they might agree with."

On why news organizations should adapt their coverage

"In this new environment, where the audience is essentially left to often judge for itself, we need the press to be more transparent than it used to be about sources ... And also to acknowledge what it doesn't know ...

"I was taught [to] never raise a question in a story that you can't answer, which was designed to kind of make your stories omniscient and airtight, like you knew everything you were talking about. It was a bit of a dodge; I remember my dad calling me up once and saying, 'I never knew you know so much about commodities!' And I said, 'I don't know anything about commodities, I just know how to fake it!'

"We can't do that anymore. Journalists have a responsibility to acknowledge what it is that isn't known yet. Because that's as much part of the news now as what we do know. Because you know your audience is navigating across many sources ...

"These notions that a news organization would share that kind of information — or present it because the audience demands it — this is still relatively new territory. You know, I talk to news organizations all the time, and they're trying to figure out what is it that audiences want now? And the idea that you would share more about your news gathering process is still a difficult concept for a lot of traditional journalists who think, 'Well, they should trust me because I've been at this for a very long time.'"

"One of the things that the Internet makes possible is for the people who make the news to create their own journalism ... whether it's corporations or trade associations or interest groups. We live in a world of spin and marketing ...

"The notion of a gatekeeper really comes down to the idea that, if I were trying to make the news, and I wanted to reach the public, and you were the press ... I had to go through you to do that. You're now only one conduit that I have, and you might be the most aggressive filter ... So I, as a newsmaker, am going to use a lot of other tools to reach the public.

"That also changes what we need from journalists. It's not enough for you, the journalist, to simply tell me what you heard. You have a bigger responsibility now to tell me, 'of the things that I've heard as a member of the public, which ones are true? And which ones are not? Help me authenticate the things that are already out there.' And that's a new role in many ways for journalists, because it's not just, 'Here, I went and covered the story, and here's what I saw.'"

Read an excerpt of Blur