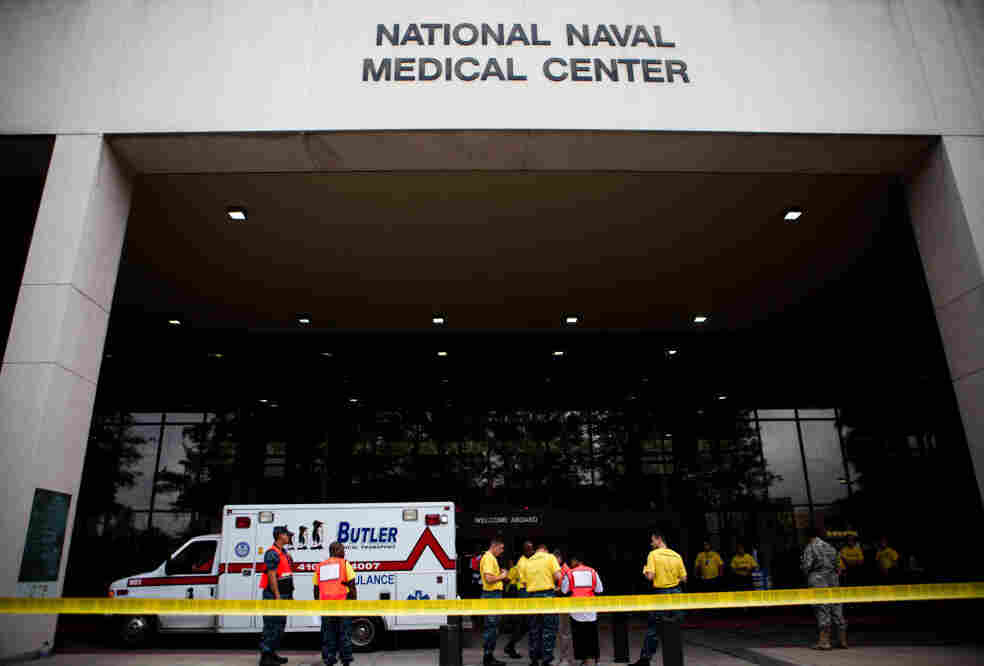 There's a lot of good sense behind closing two famous and nearby military hospitals and merging them into the new Walter Reed National Military Medical Center. But just looking at the name reveals both what's good about this merger and what makes it so tricky.

Walter Reed was a famous Army doctor, and for more than a century his name was on the Army's iconic hospital in Washington, D.C. Now that hospital is shutting its doors, and Reed's name will go onto the new hospital built on the Navy's flagship medical campus in Bethesda, Md., 6 miles away.

It's a bit like merging the Yankees and the Red Sox and then making them play in "Derek Jeter Fenway Park." Yankees fans and Red Sox Nation would never go for it — but it might make a great baseball team.

That's the sort of potential behind the new, jointly operated Army and Navy hospital. With bright new buildings and the latest technology, the new hospital promises better care to service members, veterans and injured troops from the wars in Afghanistan and Iraq.

But the Army and Navy each have their own proud traditions. So bridging those separate, and often competing, cultures will be the key to truly offering better medical care.

A 'World-Class Standard' Of Care?

The possibilities of the merger are clear when Cmdr. Blair Miles gives a tour of one of the spacious new operating suits. The scanners and computers are attached to long booms that extend down from the ceiling.

"This is going to be the neuro room," Miles says. "It's a hybrid room, and it's a biplane room, so that's why you see the two C-arms." That's a lot of jargon for the new equipment here. The point is: This operating room has all of the latest technology.

Joseph Shapiro reports on the National Museum of Health and Medicine, and how military care has changed over the years:

All of the scanners and computers are attached to long booms that extend down from the ceiling. The booms make it easy to move in even more high-tech equipment on a moment's notice, and that's safer for a patient during surgery.

"It's merging all the technology in one operating room," says project manager David Olivera. "And when we have our great staff to take care of patients like we do, we are the world-class standard, right here."

But some think that assessment is a bit optimistic. Two years ago, when the military's own Defense Health Board looked at the design for the new hospital, it wrote a scathing report about its many shortcomings.

Dr. Dennis O'Leary, a member of the board, says one problem was that Army and Navy officials couldn't agree on even basic details.

"They have their own leadership and their own cultures," O'Leary says. "And so right off the top we're talking about merging leadership, resources and cultures, and that is a daunting challenge, and no one should believe that it is anything less than that."

Those spacious new operating rooms are a response to the criticism from the Defense Health Board. But there are only three of the large rooms, and the report called for even more. Other shortcomings include a lack of private rooms for patients. O'Leary says all of this leaves the new facility short of being able to claim the official designation of a world-class facility, like Congress demanded.

The Challenge Of Merging Cultures 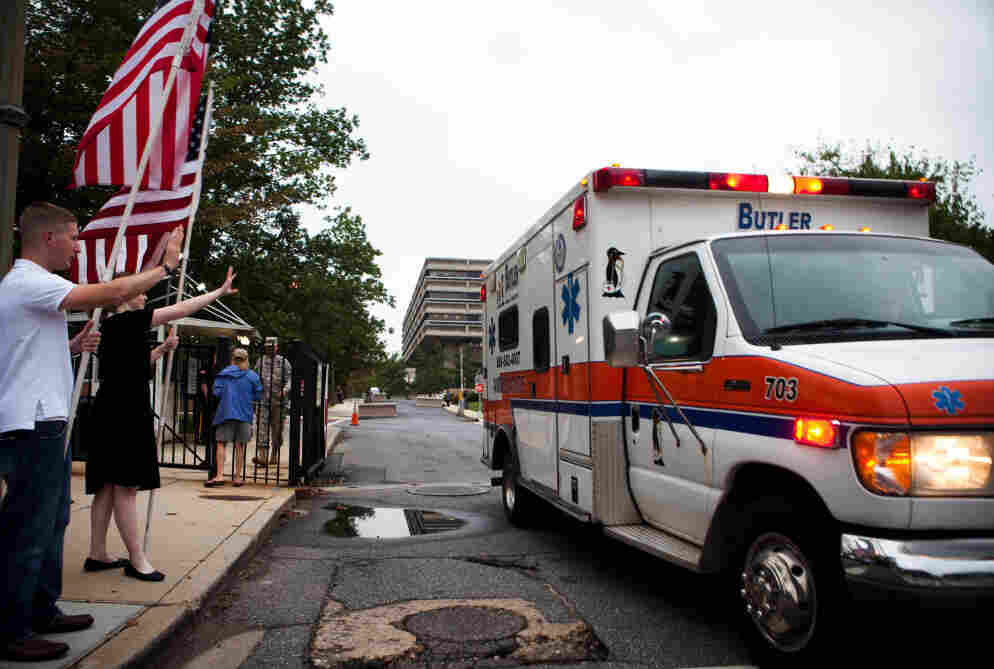 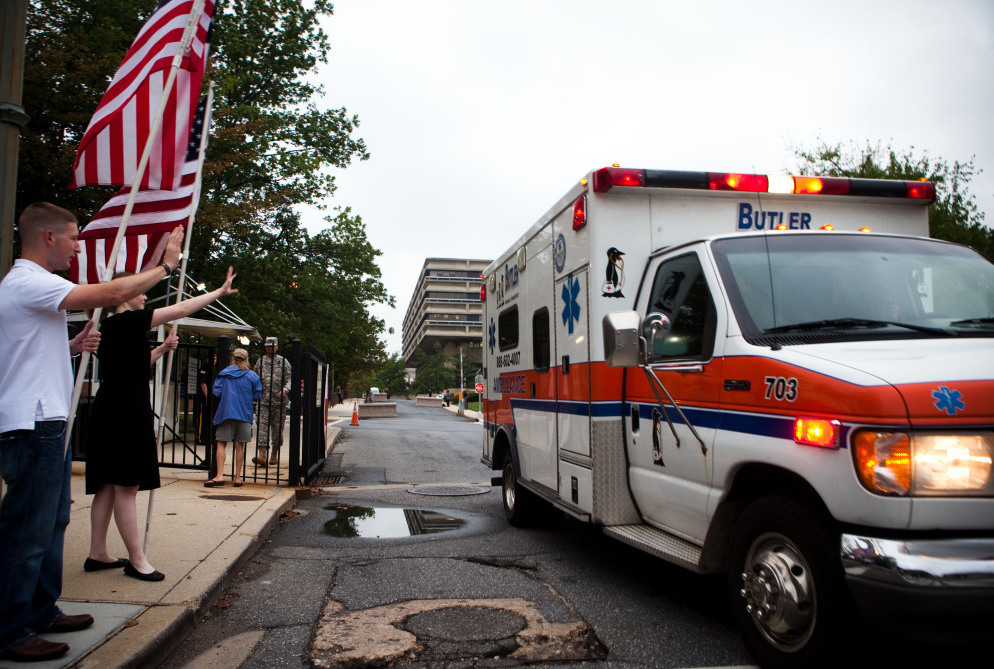 Supporters from the D.C chapter of Free Republic send off the final patients from Walter Reed Army Medical Center on Saturday.

It's not all the military's fault: It's never easy to retrofit an existing hospital. And Congress raised its expectations late in the game but didn't provide the needed money to meet those higher standards — like adding those private patient rooms.

"Change is hard, you know, for us as people," says Vice Adm. John Mateczun, who is in charge of the hospital merger. "Sometimes I think it's harder for medical people. Maybe we're a little bit more on the obsessive-compulsive side."

Mateczun knows about obsessive-compulsives because he's also a psychiatrist. In Vietnam, he was on the bomb disposal squad, so he learned to stay calm.

Those are good skills for his current job, and O'Leary credits Mateczun with getting a good start on making many of the changes the Defense Health Board sought.

Mateczun is working with admirals, generals and doctors — all are people with strong wills. They've got their own Army and Navy ways of doing things. And these ways are definitely different — from the way one makes an appointment to see a doctor to the kind of therapy a soldier or Marine with traumatic brain injury receives.

But Mateczun thinks that in the end, a shared professional background will trump the color of their uniforms.

"The fact is that everybody comes out of a medical background," he says, "and that the training for doctors and nurses and technicians in America is very much the same. And that is probably more a part of what we are than anything else." 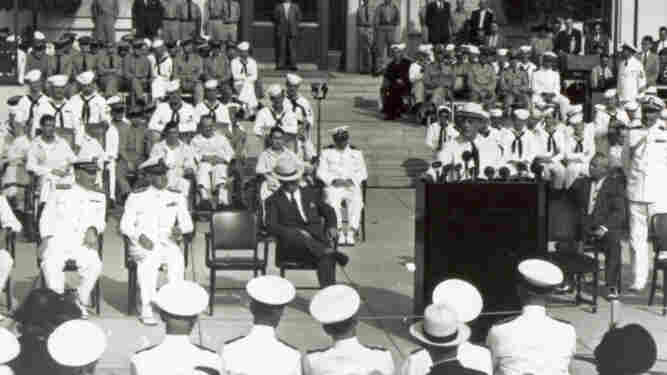 President Franklin D. Roosevelt speaks at the dedication of the Naval Medical Center in Bethesda, Md., in 1942. U.S. Navy Bureau of Medicine and Surgery hide caption 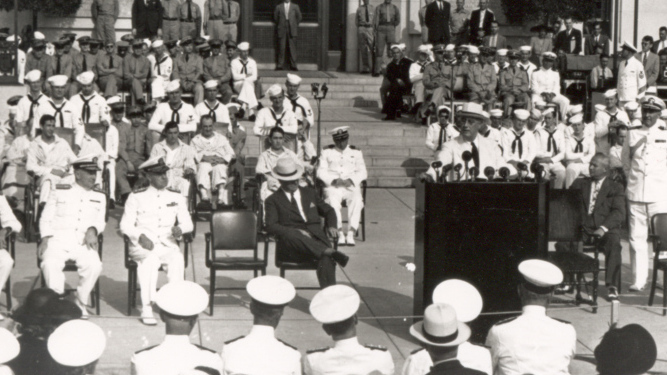 President Franklin D. Roosevelt speaks at the dedication of the Naval Medical Center in Bethesda, Md., in 1942.

Still, the proud histories of these separate hospitals go way back. The Walter Reed Army hospital was built in 1909. The origins of the Bethesda naval hospital trace back to President Franklin D. Roosevelt's pride in the Navy.

Roosevelt served as assistant secretary of the Navy during World War I. Later, as president, he picked out the location for the Navy hospital: a vegetable farm with a pond on it in the town of Bethesda, Md., outside Washington, D.C.

"Well, the president immediately fell in love with the location," says Jan Herman, a historian with the Navy's Bureau of Medicine and Surgery. "First of all, the word Bethesda: He was entranced with that because it had biblical meanings — the biblical pool of Bethesda. He saw that as a place of healing." 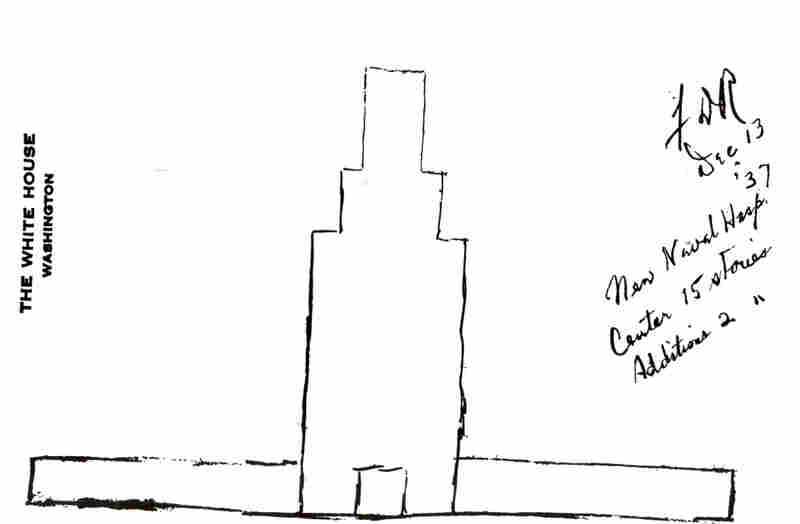 Roosevelt sketched his idea for the Naval Medical Center on White House stationery in the late 1930s. He had been the assistant secretary of the Navy during World War I and followed development of the new hospital very closely. U.S. Navy Bureau of Medicine and Surgery hide caption 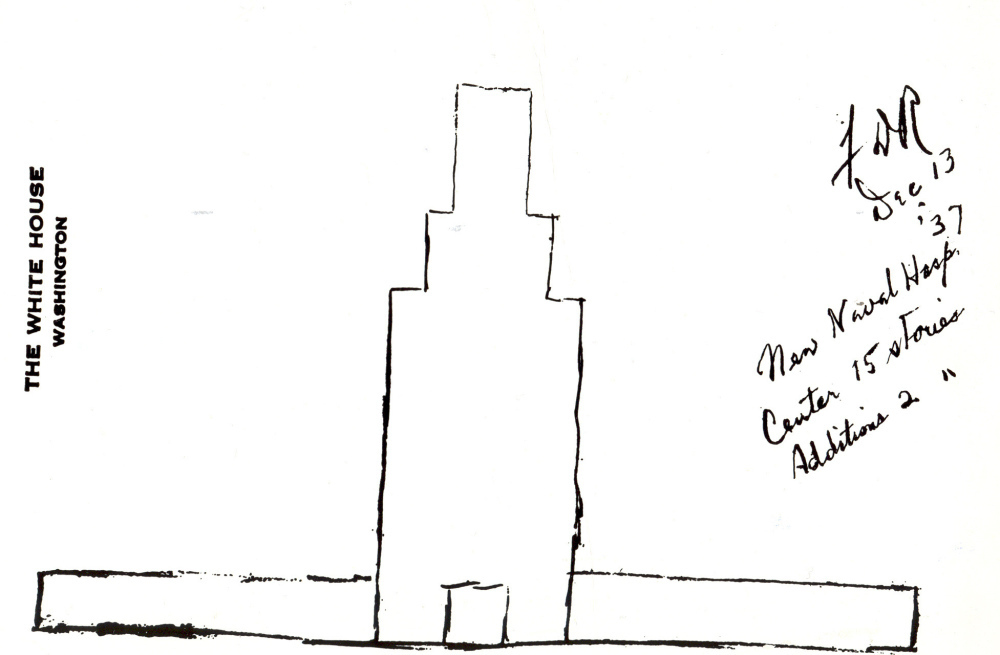 Roosevelt sketched his idea for the Naval Medical Center on White House stationery in the late 1930s. He had been the assistant secretary of the Navy during World War I and followed development of the new hospital very closely.

Roosevelt's legs had been paralyzed by polio, and he'd sought to cure himself in pools of water.

"And so he got very excited about the site," Herman says. "And he said, 'I want the hospital built here.' "

Roosevelt even sketched out the tall tower he wanted for the new Navy hospital on a piece of White House stationery. Roosevelt, in a white linen suit and white Panama hat, dedicated the new hospital on Aug. 31, 1942.

Today, multiple hospital buildings stand crowded alongside that small pool in Bethesda — including those that make up the new Walter Reed National Military Medical Center.

A Merger With Potentially Broader Implications

One criticism of the old Walter Reed was that some outpatient soldiers lived in rooms with mold, mice and cockroaches. The Washington Post revealed these conditions in an investigative series published in 2007. The new hospital and new living quarters sparkle.

Another criticism of the Army and Navy hospitals was that they failed to adequately treat troops with PTSD and traumatic brain injuries, so the new, merged hospital has specialized wards and extra staff.

If this new hospital does provide better quality of care, that could change one of the most heated debates in military medicine: Whether to combine the medical services of each military branch into one unified medical command. In June, the House of Representatives voted to do just that, but the legislation has been blocked in the Senate.

This is called the "purple suit" debate: A reference to mixing Army green with Navy and Air Force blues.

Congressional investigators say combining the military's medical operations could save taxpayers $460 million a year and improve medical care. But the Navy and the Air Force object, saying their individual medical staff best understand the needs of their own troops.

Meanwhile, some private groups have put up their own money to provide more care.

The National Intrepid Center of Excellence opened last fall, right next-door to the new hospital on the Bethesda campus. The center was built with $65 million in private funds and then turned over to the Department of Defense. It's a research and treatment facility for troops with PTSD and mild brain injuries.

"There is no place like this anywhere in the military or the civilian sector — nowhere," says Dr. James Kelly, a neurologist who runs the center.

In the first years of both the war in Afghanistan and the Iraq War, the Navy's hospital didn't screen the wounded for head injuries. This new center is another small step forward for military medicine. But the problems are big, and there's still much that needs to be done to help those injured troops.