Accessibility links
Alan And Marilyn Bergman: The Couple Behind Hollywood's Famous Tunes Marilyn and Alan Bergman have been writing irresistible songs together for 50 years, putting words in the mouths of singers like Frank Sinatra, Tony Bennett, Rosemary Clooney and Barbra Streisand. Here, the Bergmans discuss some of their favorite tunes and their many years making music together. 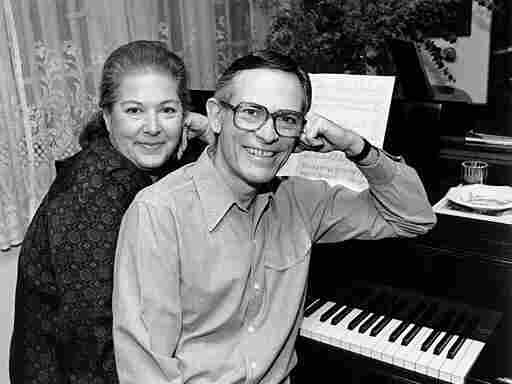 Marilyn and Alan Bergman pose at the piano in their Beverly Hills home on March 17, 1980, the same year the Bergmans were inducted into the Songwriters Hall of Fame. McLendon/AP Photo hide caption

This interview was originally broadcast on August 21, 2007. The Bergmans' album Lyrically was released in 2007.

Frank Sinatra, Barbra Streisand, Rosemary Clooney, Tony Bennett and even Fred Astaire have all recorded their songs: Husband and wife Marilyn and Alan Bergman have been writing irresistible music together for 50 years.

Their songs include the theme song from Maude, "Nice & Easy," "In the Heat of the Night" (recorded by Ray Charles), "That Face," "You Must Believe in Spring," "The Way We Were" and "What Are You Doing the Rest of Your Life?". They've written the lyrics for music featured in films as diverse as Tootsie, Yentl and the original Thomas Crown Affair — and received Oscars, Emmys, Golden Globes and Grammys in the process.

In 2007, the Bergmans joined Fresh Air's Terry Gross for a discussion of their many years making music together and some of their favorite lyrics, including "What Are You Doing the Rest of Your Life?," which was written for the 1969 film The Happy Ending.

Richard Brooks, the director, had asked the Bergmans to compose a song that could be used twice in the film: once at the beginning, when two young lovers were planning to get married, and then again at the very end, after the couple split up.

"And he said, 'I don't want you to change a note or a word, but I want the song to mean something very different when you hear it the second time,'" Alan Bergman said. "So that was a very interesting, challenging assignment."

The Bergmans sat with Michael Legrand, their composer, at a piano and started to go over various tunes for the piece.

"While he was writing music, we were sitting trying to solve the dramatic question of what the song should be about — we [asked what] happens if the first line of the song is 'What are you doing for the rest of your life?' And he said, 'Oh, I like that,'" Marilyn Bergman said. "And he put his hands on the keys, and as long as it takes to play that song, that's what he played from beginning to end, and he said, 'You mean something like that?' And we said, 'No, we mean exactly like that.' And Alan said to him, 'Play it again.' And he said, 'Oh, I don't remember quite what I played.' Luckily, we had the tape machine going, so we had the music. And then we zipped through it."

On Making Music For Movies

Marilyn Bergman: I think maybe movies made a deeper impression growing up. And we always knew that we wanted to write in a dramatic context. We were more interested in that than we were in just writing songs in limbo. Writing in a narrative or dramatic context when we were honing craft. You can't write for a picture unless somebody hires you, you know? So, it's like an actor not being able to act unless he gets a job, or she gets a job. So we would do exercises. We would find either short stories or scenes from plays or articles in the newspaper, and pretend that they were assignments. And we wrote many, many, many songs that never saw the light of day, but were exercises that we gave ourselves. So I like to think that when the first job came, we were ready.

On Their First Song

Alan Bergman: The first day we were introduced to each other, we wrote a song. It was a terrible song, but we loved the process. We enjoy the process. And from that day on, we've been writing together.

On 'The Face,' Recorded By Fred Astaire

Alan Bergman: Well, Lew Spence, who wrote the music, he was going out with a girl, and Marilyn and I were going out together. And I wanted to ask her to marry me and have some kind of engagement, but I didn't have any money. So we wrote this song and we figured — we got an appointment with Fred Astaire. Fred Astaire was Marilyn's favorite singer. She loved the way he sang. ... So we wrangled an appointment with Fred Astaire and sang him the song. He said, "Before I listen," he said — he owned the record company, he said, "I only record what I sing in movies, but I'll listen." He was very sweet. And so we played and sang him the song, and he said, "I'm going to record this next week." And he did. And I handed Marilyn this record and I said...

Marilyn Bergman: And I married him.

Alan Bergman: And she married me. Yeah.