Accessibility links
End Of An Era: A Telethon Without Jerry Lewis It's still unclear why Sunday's Muscular Dystrophy Association telethon will be held without Jerry Lewis. Donations have been down, and the charity appears to have been concerned about attracting audiences. What is clear, however, is that this year's show marks the end of a television institution. 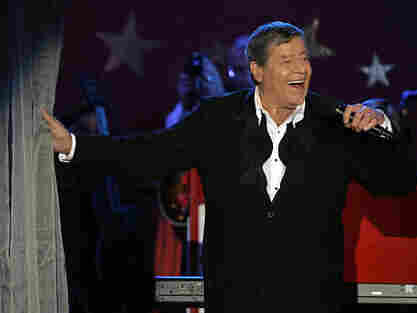 For decades, Labor Day weekend has meant the Jerry Lewis telethon for muscular dystrophy. But this year, for the first time in 46 years, Jerry Lewis won't be on the show. The 85-year-old comedian has been dropped from the program for reasons that are still unclear.

What is clear is that this marks the end of a television institution. Every year, Lewis would drag himself through more than 21 hours of live TV — often on the verge of tears — asking viewers to give to the Muscular Dystrophy Association to help those he calls "Jerry's kids." Over the years, he helped to raise more than $2 billion for the cause.

Earlier this year, Lewis said he was retiring as host but would appear one last time this year to sing his signature song, "You'll Never Walk Alone." Then last month, the MDA abruptly announced that Lewis would not appear at all and would no longer serve as the group's national chairman. Neither Lewis nor the association would explain why.

Lewis can often be abrasive. He has offended some over the years with insensitive remarks about women, gays and people with disabilities. But he has also built a strong following for his tireless efforts to help those with muscular dystrophy. And supporters were upset to hear he would no longer be part of the show.

The MDA Labor Day telethon began in 1966 and has featured many famous acts, including the Jackson 5, KISS and here, a surprise reunion between Dean Martin and host Jerry Lewis — arranged by Frank Sinatra — in 1976. The Martin and Lewis act had split 20 years prior.

"As a fan of Jerry Lewis, I'm upset. Of course I am," says James Lacerenza of Stamford, Conn. Lacerenza, 24, has cerebral palsy. He has spent half his life volunteering and raising money to send children with muscular dystrophy to camp.

Lacerenza says he loves Lewis and all he has done for the cause. He is worried about what will happen if people become too upset that Lewis is no longer on the show.

"They're going to be like, 'I don't want to give,' " he says. "I think the right thing to do is to let your heart be your guide and to give, in honor of Jerry Lewis."

It's become a passionate debate online. Some on Facebook say they're so angry about the association's treatment of Lewis that they'll never give to the group again. Others plead for calm and say the controversy shouldn't stop people from helping those with serious diseases.

There are still others who are glad to see Lewis finally leave the stage.

"It's good to see him gone," says Mike Ervin, a writer and disability rights activist in Chicago. "We've had disputes for many years."

Ervin has spinal muscular atrophy and was one of "Jerry's kids" in the 1960s. But as an adult, he started Jerry's Orphans, a group opposed to what Ervin says is the telethon's portrayal of people with disabilities as victims to be pitied.

"I think that nobody really stops to think about how it makes a child feel to be held up as what they call ... ambassadors now," says Ervin. "Really, what they're saying is that this child really has very little future unless you come through."

But the MDA appears to have been more concerned about attracting new audiences in making this year's changes to the telethon. Donations have been down recently, and last year, the charity said it would shorten the show from 21.5 hours — which used to begin the day before Labor Day — to six hours and air it only on Sunday night.

"It's going to be a more concentrated viewership rather than the spread-out viewership that we may have gotten on Sundays," she says. "Also, we've been able to enlist big national talent."

Singers such as Celine Dion, Lady Antebellum and Jennifer Lopez are scheduled to appear.

Still, Lacerenza thinks a big opportunity has been lost, that this year's show could have been a grand farewell to a cultural icon.

"If this was done properly, then this would have been ... my generation's [equivalent to the] Johnny Carson sendoff. And we would have had the most watched telethon, with the most pledged dollars ever," he says.