Accessibility links
Surprising Areas See Growth In Green Jobs A report says the upstate New York region has the highest concentration of green jobs in the country. Another surprising name in the top 10: northeast Ohio. But critics say the numbers of jobs created are too few to justify the use of federal stimulus dollars. 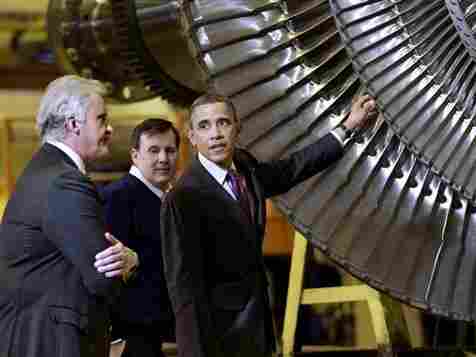 When you think about Green Energy and its jobs, Albany, N.Y., probably wouldn't be the first city that pops into your head. But according to a report, the upstate New York region has the highest concentration of green jobs in the country. Another surprising area in the top 10: Cleveland and northeast Ohio.

Inside a factory in Willoughby, Ohio, Ashlawn Energy is teaming with a local utility and other partners to design and build flow batteries, which, when fully assembled, will be as big as a house.

Project manager Joseph Startari explains that these batteries enable utilities to collect and store energy, including wind and solar power, and then have it available to send out when customers need it.

"It's part of the smart grid, and it takes a lot of load off the grid and prevents brownouts and things of that nature," he says.

Ashlawn says its project, still in the very early days, is going well. The company says it hopes to create a new U.S. manufacturing base and hire more than 200 people within about four years. But to get started, Ashlawn needed help. That's where Uncle Sam came in.

"We would not have been able to do this without stimulus funds, because there was too much risk for a private equity investor," Startari says. "Now there is not going to be so much risk because we can show high performance with the designs we are testing right now."

The company got about $3.5 million, part of President Obama's plan to stimulate the economy and create millions of green jobs. How many have been created by this project so far? About a dozen.

If you do the math, using stimulus dollars and the number of jobs created here and elsewhere, it looks like a big waste of taxpayer money — and that's what critics claim. Even those who support the president's green initiative on energy policy grounds find fault with it as a jobs program.

"There were a few reasons why the stimulus program had its limits," says Michael Levi at the Council on Foreign Relations. "The first was that you had to invest in expensive equipment and capital that would take up a lot of the money in the near term, and that money wouldn't go to wages for people."

It's difficult to ascertain just how many green jobs have been created, but Mark Muro of the Brookings Institution, who has just completed a major report on the green economy, has an estimate: He says between 2003 and 2010, about 100,000 new jobs were created in the green energy and clean-tech sector. Not all of them can be linked to the stimulus.

Muro says that while the number of new green jobs is much smaller than hoped, the number should grow in the future. For it to grow quickly, he says, "you need really vibrant regional clusters of companies.

"One of our findings was that places that have a critical mass were actually growing faster."

These include Albany, N.Y., or northeast Ohio. That's where Rebecca Bagley of the nonprofit organization NorTech does cluster development with companies, workers, funders and universities.

"You take all those assets, interconnect them, create opportunities that they would have challenging times doing themselves to basically accelerate growth," she says.

She says the jobs being created and likely to be created are good ones.

"They are jobs where you can actually be making things," she says. "That makes it extremely valuable especially for the Midwest economy."

And, she adds, the jobs pay well. According to the report, the median pay for green jobs is about 13 percent higher than for U.S. workers overall.