Accessibility links
SuperPACs, Explained (By Colbert's Lawyer) The TV comic's political action committee — Americans For A Better Tomorrow, Tomorrow — is just one of hundreds of outside groups legally allowed to make "unlimited independent expenditures" in the 2012 presidential race. But the people who run those groups are increasingly close to the candidates themselves. 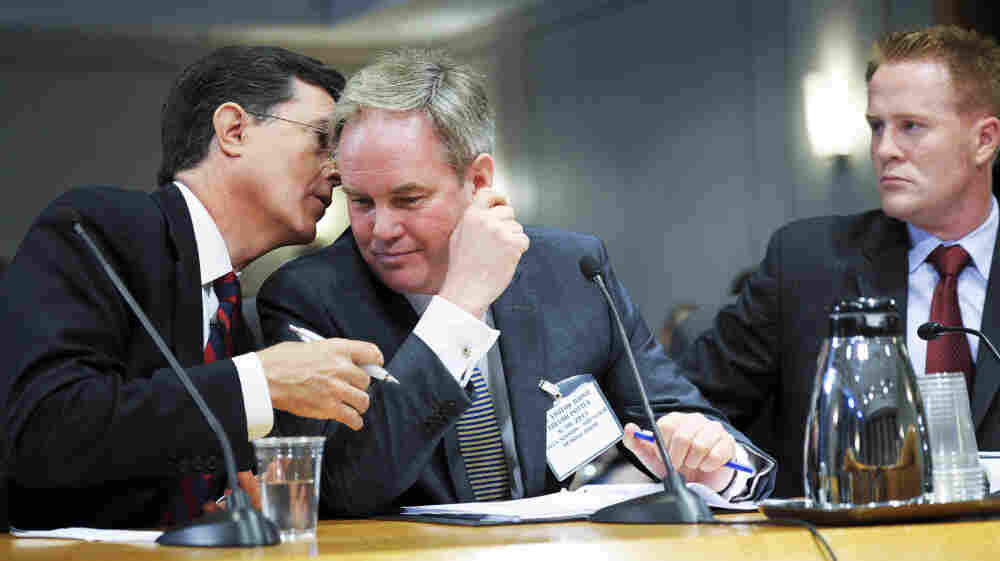 Comedian Stephen Colbert (left) confers with his attorney Trevor Potter (center) as Matthew Sanderson looks on at right, as they appeared before the Federal Election Commission in Washington. Potter says Colbert's superPAC — Americans For A Better Tomorrow, Tomorrow — is no joke. Cliff Owen/AP hide caption 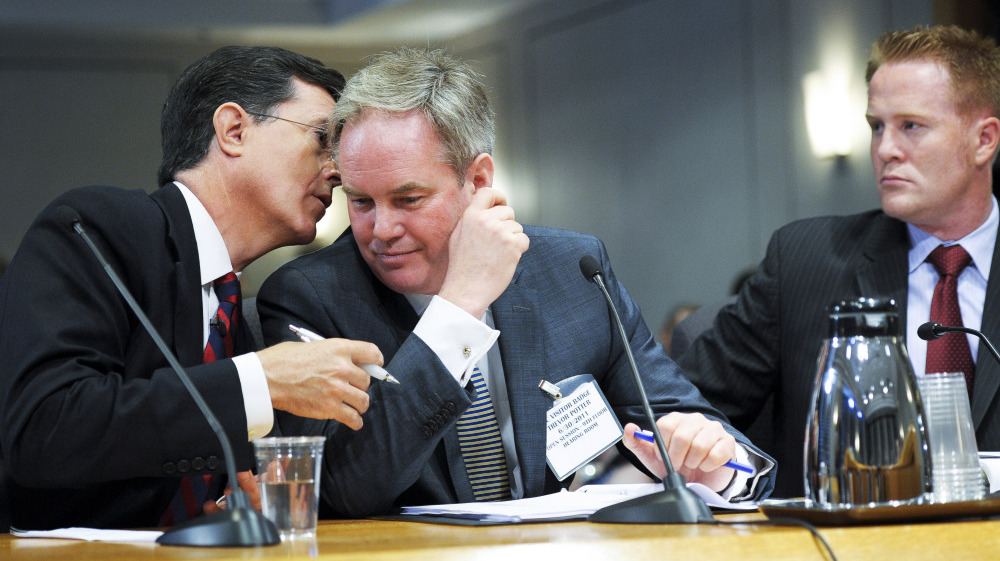 Comedian Stephen Colbert (left) confers with his attorney Trevor Potter (center) as Matthew Sanderson looks on at right, as they appeared before the Federal Election Commission in Washington. Potter says Colbert's superPAC — Americans For A Better Tomorrow, Tomorrow — is no joke.

Trevor Potter is a Washington lawyer with the firm Caplin and Drysdale. He also served as chair of the Federal Election Commission.

And he says Stephen Colbert is not joking.

At least when it comes to the comedian's superPAC, a political action committee authorized by the FEC to make "unlimited independent expenditures." Colbert's is called Americans For A Better Tomorrow, Tomorrow.

Colbert didn't get it without help. He hired Potter to submit the paperwork and coach him on his FEC hearing.

"It's not a joke," Potter tells NPR's Laura Sullivan, guest host of weekends on All Things Considered. "Because, as he has put it, he wanted to bring people in behind the curtain so they could see [superPACs] actually worked and what they actually did."

What They Actually Do

The primary purpose of superPACs and other independent groups, Potter explains, is to spend a lot of money. Mostly on TV ads.

Why they can do that has to do with last year's Supreme Court decision, Citizens United vs. Federal Election Commission.

"If an individual has a constitutional right to make an independent expenditure" — meaning one not directly associated with a particular candidate or campaign — "then a group of individuals has the same right acting as a group."

This election cycle, two specific types of groups have been doing just that.

The first type, your basic superPAC, is registered with the FEC and required to disclose its donors.

The other type includes groups that are registered as non-profits with the IRS. They aren't required to disclose any information about where their money comes from.

I Want One, Too

Texas Gov. Rick Perry stands out in the Republican presidential field as perhaps the biggest superPAC magnet. At last count, he had at least three clamoring to support his bid.

But most everyone in the race has at least one superPAC in his or her corner, says Sheila Krumholz, executive director of the Center for Responsive Politics.

"Mitt Romney has Restore Our Future supporting his race," she says.

Michele Bachmann has two: Keep Conservatives United and Citizens For a Working America.

A superPAC supporting President Obama is no less-vaguely named. His is Priorities USA Action.

All these groups can spend unlimited amounts of money on television ads in support of their candidate — as long as they don't consult with the candidates or the campaign staff directly.

That's were things get tricky.

The problem with so many of these new superPACs? Sheila Krumholz says they're not run '"independently."

"So many of these organizations are actually directed by the former top lieutenants of the candidates," she says. "While they're technically unaffiliated, there's very clearly a close connection for many of these superPACs running to support a specific candidate."

Trevor Potter points to a pro-Romney superPAC that recently accepted $1 million from a corporation few had ever heard of that had existed for about six weeks.

"It turned out to be somebody in Boston who was an old friend of Romney's, and for reasons of his own — hiding his name," Potter says.

Former FEC Chair Brad Smith says that could be a gray area, legally speaking, but it's increasingly a fact of life when it comes to running big political operations.

"There's a relatively small number of people who know how to do it, and interested in the partisan elements," he says.

Smith also says allowing more money to be spent in a campaign could make things more competitive, not less.

"I think we saw that in the 2010 election," he says. "As the playing field kept expanding, as it would become apparent that somebody was vulnerable, money could get into that race and make it competitive."

More money could be the new norm, Trevor Potter says. The FEC's commissioners — three Republicans and three Democrats — are deadlocked over how to regulate campaign finance in the post-Citizens United world.

"They, at the moment, can't even have an agreement on opening a rule-making to decide what the Supreme Court did in Citizens United and decide what that decision allows and doesn't allow."