Accessibility links
A 'Showdown' That Changed Football's Racial History Much of the NFL integrated in the 1940s. The Washington Redskins held out until 1962. In a new book, historian Thomas G. Smith writes about how it took an ultimatum from the Kennedy administration to allow blacks into pro football in the nation's capital. 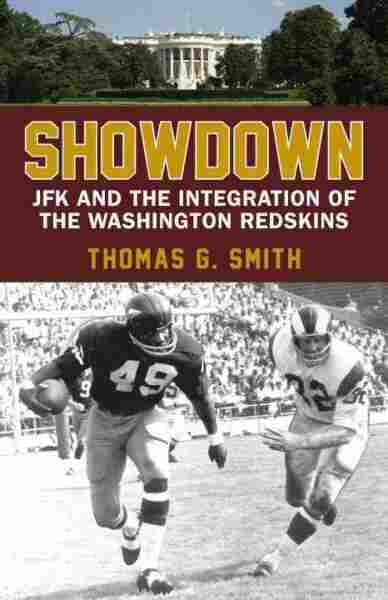 JFK and the Integration of the Washington Redskins

Jackie Robinson broke baseball's color barrier in 1947. But it wasn't until 1962 that the last NFL franchise integrated — the Washington Redskins.

As Thomas G. Smith writes in his new book, Showdown: JFK and the Integration of the Washington Redskins, Redskins owner George Preston Marshall was quite happy running the last segregated team. "He loved being a holdout because he loved the attention," Smith told weekends on All Things Considered guest host Laura Sullivan. "His excuse for being the only holdout [was] the Redskins are the South's team and the South is segregated. So is the nation's capital, and this is my primary audience."

But the Redskins' history of racism predates their time in Washington. They were created as the Boston Braves, just like the original Beantown baseball team back in the days when a town's sports franchises often had the same name. In 1933, the team moved into Fenway Park. Marshall also hired a new coach that year, a member of the Sioux nation named Lone Star Dietz, "and to honor Dietz, so he said, he renamed the team Redskins," recalled Smith.

The players and coach Dietz were also forced to wear war paint and act out Indian-style dances on the field. Smith said that made it difficult for the players to perform in the game: "They became physically so tired that they couldn't perform well, and it was embarrassing and humiliating and they hated it."

Racial discrimination damaged the Redskins performance on the field for another reason. Many of the prime draft picks were African-Americans, and because the Redskins were perennially bad Marshall often had the first slot in the draft. But year after year he would pass up future Hall of Famers like Jim Brown and Jim Parker for white players. Many of them would never make a name for themselves – not to mention the 'Skins.

By the early sixties, the civil rights movement was gaining strength, and Washington became a majority black city in 1960. Smith said pressure started building from the black fan base and the media, including Washington's premier sports columnist, Shirley Povich.

None of that was enough to push Marshall across the color line. The leverage finally came in 1961 as the Redskins prepared to move into the brand new D.C. Stadium, later renamed for Robert F. Kennedy.

The stadium was on federal land, so President John F. Kennedy's interior secretary, Stewart Udall, was effectively D.C. Stadium's landlord. He gave Marshall an ultimatum, according to Smith, "If you do not hire a black player, you will not be able to use this new stadium." Marshall refused, Udall backed off, and the Redskins did play in their new stadium for the 1961 season.

"But if you don't integrate in 1962, you will not be able to use the stadium." Smith said that's the line in the sand Udall drew as the next season approached. He told Marshall to sign or trade for a black player, turning the 1962 draft into a showdown. Marshall refused to draft an African-American, so he sent coach Bill McPeak to do it for him.

The Redskins drafted Syracuse back Ernie Davis as the first pick in the 1962 draft. Davis was traded, but the Redskins eventually signed five African-Americans, including future Hall of Famer Bobby Mitchell.

Mitchell maintains that he never had any issues with George Preston Marshall, but faced much hostility from fans. Mitchell, the Redskins' first African-American star, stayed with the team for decades, eventually rising to the position of assistant general manager before retiring in 2002.

Read an excerpt of Showdown