Accessibility links
Memories Of Sept. 11's First Recorded Casualty Endure Father Mychal Judge was a beloved Fire Department of New York chaplain known for savoring life. He was also the first recorded victim of the Sept. 11, 2001, attacks. Ten years later, he's recalled as the priest who flouted convention, yet was also revered as a saint. 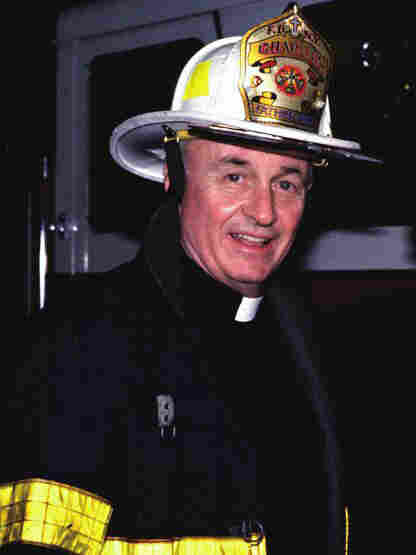 Father Mychal Judge became a fire department chaplain in 1992 — and he liked to join company drills. One retired fireman recalls, "I could picture him, chopping down a door with an axe. He would love to do that, too." Holy Name Province Franciscans hide caption 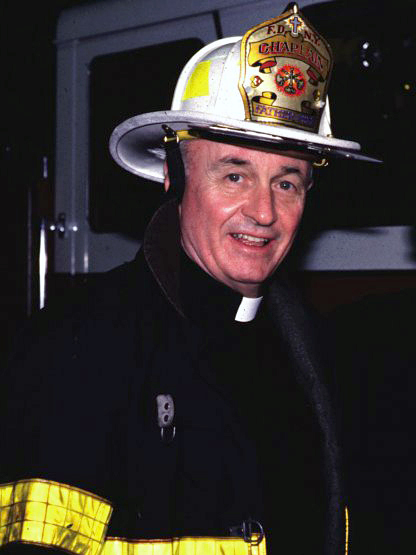 Father Mychal Judge became a fire department chaplain in 1992 — and he liked to join company drills. One retired fireman recalls, "I could picture him, chopping down a door with an axe. He would love to do that, too."

When planes hit the World Trade Center on Sept. 11, 2001, Father Mychal Judge ran into the North Tower alongside the firemen he served. Not long after, he became the first recorded victim of the terrorist attacks.

But 10 years later, his friends and colleagues remember Judge as vividly in death as they knew him in life: a gregarious, irreverent man wholly devoted to God, whom many considered a saint, in large part because of his own personal struggles.

Priest On A Fire Ladder

From the first, Mychal Judge loved to be where the action is.

His friend and fellow friar Michael Duffy remembers an episode when they were both young Franciscan priests in East Rutherford, N.J. Judge heard that a man had locked himself in the attic of his home and was threatening to shoot his wife and baby.

Soon after, Michael Duffy arrived at the scene. There were police cars, fire trucks, TV crews — and a figure climbing up the ladder to the attic.

"Who's on the ladder?" Duffy laughs. "Father Mychal Judge! And in his habit."

The priest, in his long brown robe and sandals, climbed in the window and disappeared.

"We waited 5 minutes, 10 minutes, 15 minutes. Sweating bullets, waiting for that gunshot," Duffy recalls. "The next thing you know, 20 minutes later, the front door opens, and out comes the wife holding the baby, the man with the guy, and Mychal Judge with his arm around him."

So it was no surprise when Judge moved to the priory across the street from the firehouse on West 31st St., one of New York City's busiest fire stations. He became a department chaplain in 1992.

"He had a deep voice, like a man's man, you know?" Monahan says. "I could picture him, chopping down a door with an axe. He would love to do that, too. He'd love to get in on the drills and practice with the Halligan, swinging it, breaking the door or something. He fit right in, you know?"

Another retired fireman, Jimmy Boyle, agrees that Father Mychal was one of the boys — but not when he was performing religious ceremonies.

"He could go into the firehouse, have a cup of coffee, have a meal, listen to all the talk, watch the ballgame, hear your problems, talk about anything you want," Boyle says. "But when he said Mass in the firehouse, I always felt when he got to the Eucharist, he just transformed himself. He became like Christ. He was just so pious."

Boyle says in any kind of emergency, Mychal Judge was a first responder. He rushed to the crash site of TWA Flight 800; to countless buildings on fire; and to hospital burn units — which is where Vina Drennan met him, in March 1994.

Drennan's husband had been severely burned the night before. Judge sat with her virtually every day, sometimes for hours, while her husband lingered.

"In 40 days he was always there," she recalls. "And when he prayed over John's burned body, you felt you had a chance that God would listen, anyway. You felt that the words were just flying right up."

For years after her husband died, Judge called just about every day. Drennan wasn't alone. Each night, the priest would have maybe 30 messages on his phone, which he'd return before going to sleep.

"Everybody called him!" Drennan says, laughing. "You know, 'Can you baptize my baby, can you do this,' and I'd say to him, 'Mychal, Jesus didn't have an answering machine! Just disconnect it!'"

Judge was a tornado of comfort, dispensing clothes and dollar bills to the homeless; ministering to AIDS patients; spending hours with those suffering from addiction.

Addiction was something he knew well. He was a recovering alcoholic himself, 23 years sober. And at support meetings, he often saw Malachy McCourt.

McCourt, a writer, actor and proud atheist, remembers once telling his friend the priest that he had plunged into a deep depression. Why are you worrying about the future, he recalls Judge saying, God hasn't even made it yet.

"And he said, 'Listen: because God has not yet made tomorrow, omnipotent, all-knowing, all-seeing as he is, he doesn't know what's going to happen. So who the ____ do you think you are?!', McCourt roars, recalling the salty language. "So he said, 'Don't get into the future. It's a very dangerous place for alcoholics.'"

Judge was also a celibate gay man in the priesthood, a fact he revealed only to a select few. Brendan Fay, a gay activist who co-produced The Saint of 9/11, a documentary about Mychal Judge, says the chaplain's struggles drew people to him.

"Mychal sort of weaved his way in and out of groups that wouldn't be caught near each other," Fay says.

Republican Mayor Rudi Giuliani and Democratic Mayor David Dinkins; conservative and liberal Catholics; stock brokers and street people — all claimed him as a friend. One reason, Fay says, is that even in the dark hour, Judge could make life a celebration.

"His mother always reminded him, 'You can't go wrong with a song. When you don't know what to do, sing,'" Fay says.

Judge was famous for his rendition of the murder ballad, "Frankie and Johnny," which he sang at birthday parties. He once sang "God Bless America" at the funeral of a gay man in the middle of the AIDS epidemic.

All 'Within The Divine Plan'

Friends say Judge had a fierce conviction that all would be well. Still, in the last few months of his life, they noticed a shadow come over him.

"He knew he was going to die," says Father Christopher Keenan, a fellow Franciscan who took over the chaplaincy after the Sept. 11 attacks. "He knew something was coming down. He said to me two different times, 'Chrissy, the Lord's going to be coming for me.'"

Keenan says he received what seemed like a farewell note a few days before the terrorist attack. And at a mass at the firehouse on Sept. 10, in what turned out to be his last homily, Mychal Judge reminded the fire fighters that in the midst of danger, God is near.

"A couple of times he said, 'Chrissy, if I have to go to our infirmary, take me to the roof outside your room and shoot me,'" Keenan says, laughing at the memory. "Because he wanted to die with his boots on, with his sandals on. And that he did."

On the morning of Sept. 11, 2001, Judge rushed with some off-duty firemen to the World Trade Center, which had just been hit by the first plane. Tom Von Essen, who was then commissioner of the New York Fire Department, saw him in the North Tower.

"And he looked really concerned," Von Essen recalls. "We didn't talk. We always talked. We always fooled around. But we didn't that morning."

As it happened, French documentary filmmakers were inside the North tower. Their camera captured some of the last moments of Mychal Judge's life. In the film, says his friend, Father Michael Duffy, you can see the priest standing by the plate glass window, watching the bodies fall on the patio outside.

"And if you look closely at that film, you'll see his lips moving," Duffy says. "Now, for those of us who know him, he wasn't one that talked to himself. He was praying. And absolving people as they fell to their death."

Moments later, the South Tower collapsed. The force of the explosion shattered the windows and flung the priest across the lobby. In the darkness, some firemen stumbled over a body.

"It's Father Mike!" they yelled. They lifted his limp body and gently placed him in a chair. As they carried him outside, a photographer snapped an iconic picture of the developing tragedy.

A Priest On 'The Next Level'

Von Essen says there were a lot of heroes that day, and Mychal Judge was one.

"I think he wouldn't have had it any other way," he says. "It was as if he took the lead, all those angels, right through heaven's gates, you know. That's what it seemed like to us. And I guess if any of those guys were confused on the way up, he was there to kind of ease the transition from this life to the next."

And when his time comes, Monahan says, he expects to see Mychal Judge. They'll have a party, he says. Maybe sing a song.