Accessibility links
The 'Top Secret America' Created After Sept. 11 Washington Post national security reporter Dana Priest's book Top Secret America looks at the top-secret intelligence and counterterrorism network created after Sept. 11. "No one knows how much money it costs, how many people it employs, [or] how many programs exist within it," she says. 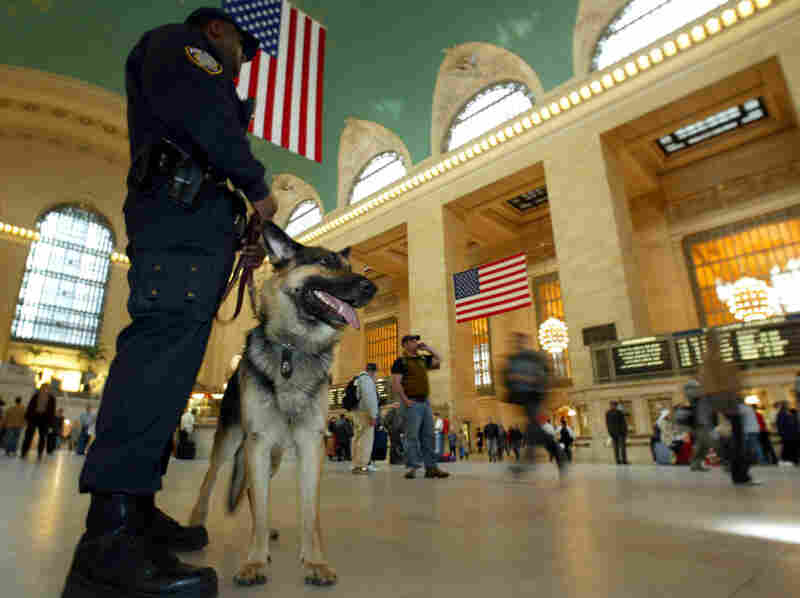 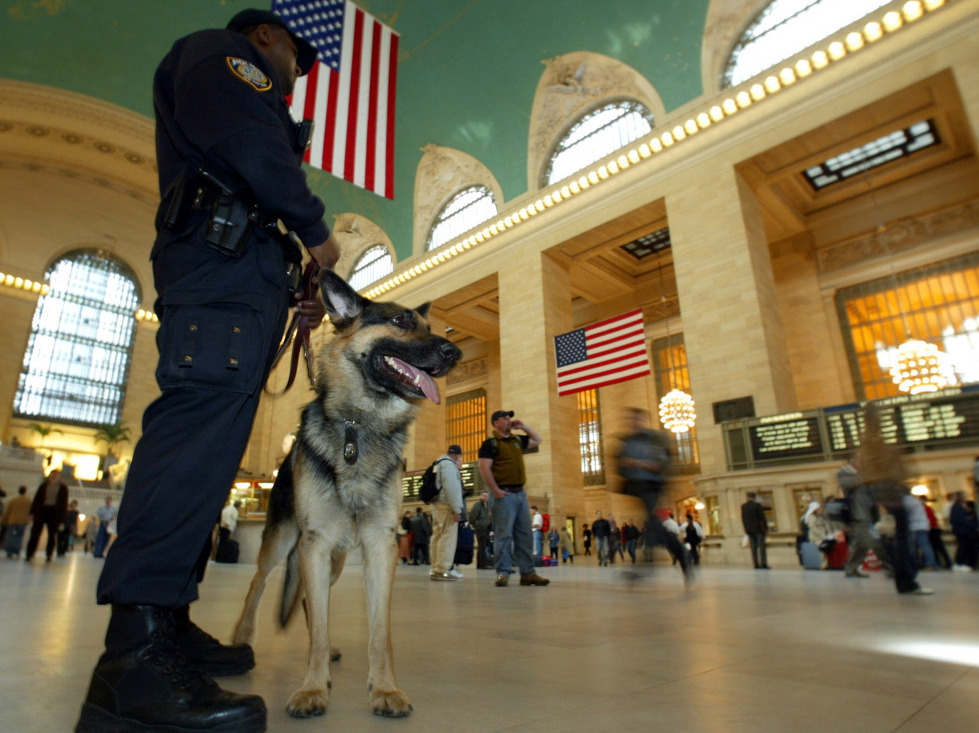 A K-9 police officer and his partner, "Bart," patrol New York's Grand Central Terminal in 2003. Less visible are the clandestine security measures the government has implemented since 2001.

Thousands of government organizations and private companies work on programs related to counterterrorism, homeland security and intelligence. Last December, The Washington Post reported that this "top-secret world ... has become so large, so unwieldy and so secretive that no one knows how much money it costs, how many people it employs, how many programs exist within it or exactly how many agencies do the same work."

On today's Fresh Air, Washington Post national security reporter Dana Priest, the co-author of both the Post's investigative series and the book Top Secret America: The Rise of the New American Security State, joins Terry Gross for a discussion about how the "terrorism industrial complex" created in response to the Sept. 11 attacks grew to be so big. 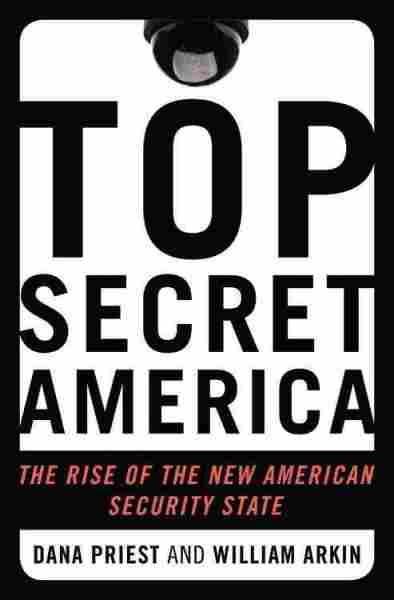 The Rise of the New American Security State

by Dana Priest and William Arkin

Priest and fellow Post reporter William Arkin found that many security and intelligence agencies do the same work. For example, there are 51 federal organizations and military commands, she says, that track the flow of money to and from terrorist networks.

"So what you have are good-hearted people and companies and employees who are doing what they think they can get paid for and what might help but so much of it is reinventing the wheel that another organization has already reinvented five times," she says.

Because much of the counterterrorism work is classified, she says, there's no room for the public to have any kind of oversight into the process. That role falls largely those with security clearances and the intelligence committees within Congress.

"So you and I cannot pressure government to do better," she says. "The interest groups that weigh in on every other subject matter in our governments cannot weigh in, in any public manner. So you get this cabal of people who have clearances and they weigh in — and that cabal, unfortunately, includes a profit motive because there are so many companies whose livelihoods depend on a continued flow of money to them — because [right after Sept. 11] the government relied on contractors to do the work ... [because] Congress and the White House didn't want it to appear like they were growing government while they were asking the government to do much more."

Many of the contractors that the government hired to do counterintelligence and security work are paid much more than their public counterparts in the CIA and Homeland Security.

"[The government] is willing to pay these companies money to get the bodies," she says. "It's created this unintended adverse consequence: [The private companies then] also drew from the agencies. It sucked away the very people that those agencies needed to keep. And it did it because it could attract them with relatively high salaries and less stressful work than when you're working in government. So in addition to costing more, it cost the government some of its best people — and then it sold those people back to them at two or three times as much money."

More than 800,000 people now hold top-secret security clearances. And now an entire industry has sprung up to provide those clearances, says Priest.

"The government is now contracting contractors to do the security clearances for other contractors," she says. "The contractors, in the beginning, were just supposed to be supplemental to the federal employees. ... But now, they are everywhere. And some agencies ... could not exist without them."

When 9/11 came along, not only were more things put into the secret box, but they were more highly classified — making it difficult for not only the public to understand, but for other people within government [to understand].

Priest also profiles the Joint Special Operations Command, or JSOC, the clandestine military command that now conducts more anti-terrorism operations than the CIA. The organization, established in 1980, conducted hostage rescues for many years. It has since developed into a highly secretive and lethal force responsible for reconnaissance and targeted military operations — including the one last May in Pakistan that found and killed Osama Bin Laden. Priest describes JSOC as "sitting at the center of a secret universe as the dark matter that shapes the world in ways that are usually not detectable."

"In the last 10 years, JSOC has managed to pull off a level of obscurity that the CIA hasn't even managed," she says. "Until now, we have had sporadic reporting here and there about actions undertaken by JSOC but [we have] tried to put together its history since 9/11 when it was completely revamped into a manhunting, lethal arm of the military."

Priest and Arkin looked at what JSOC has been allowed to do and how effective the organization has been in the past decade.

"As a killing machine, it is highly effective," she says. "No one competes with them. It is a professionalized killing force and that's what it's been used for. They operate in very small groups of people so they can keep a low profile. They have their own interrogation facilities that they alone control. And they have captured and killed a lot more Al-Qaeda than the CIA have."

The JSOC team also did reconnaissance and special-operations work in the months directly after Sept. 11. 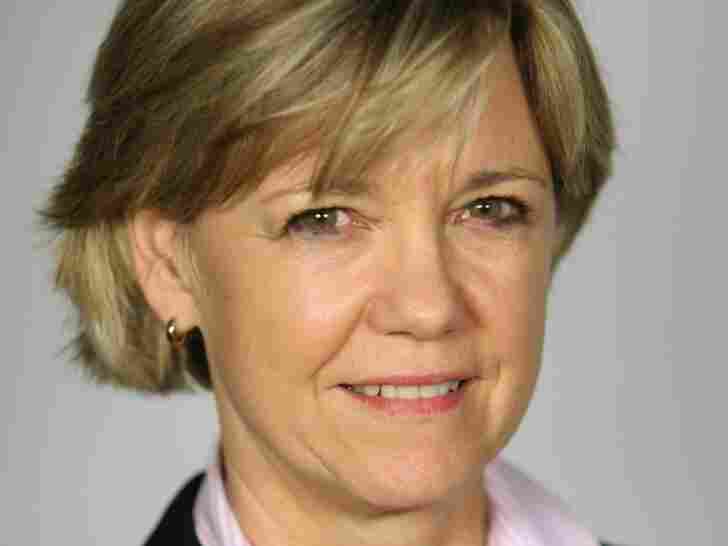 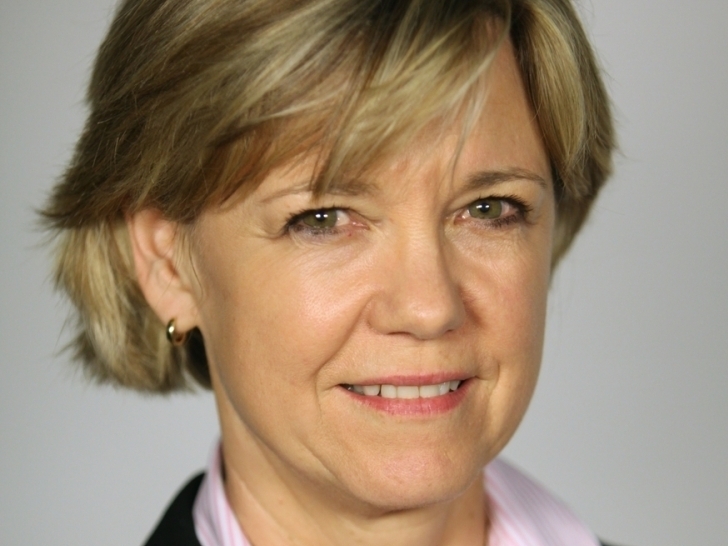 "They also have a kill list," she says. "That is one of the more controversial aspects of JSOC and the CIA — they can put people on that list and they can then hunt them down and kill them. Some people call that assassination, which is banned in the United States. Other people call that targeted killing. That's what the U.S. government calls it."

Priest says both Presidents Bush and Obama have used JSOC as a personal weapon against terrorists.

"In JSOC's case, they have the authority to do more killing in this way than the CIA does without informing Congress," she says. "Under [President] Bush, they did not inform Congress much at all about JSOC's actions. President Obama has taken a slightly different approach. He believes they should brief Congress. ... The CIA has more oversight of its activities than JSOC does. JSOC's oversight comes from its own chain of command. The CIA's oversight comes not only from its own chain of command — but also from Congress."

Priest says there's a difference between secrecy — and the current state of secrecy that was created in response to the terrorist attacks on Sept. 11.

"We're not arguing that secrecy is unnecessary — not at all," she says. "The bin Laden strike is one great example of why you do have to keep operations secret. However, the secrecy has gotten out of control. Everybody in government and outside has made that point. When 9/11 came along, not only were more things put into the secret box, but they were more highly classified — making it difficult for not only the public to understand, but for other people within government [to understand]. ... And now, it's simply out of control. And most people I interviewed would agree with that. And they would also agree that the government can no longer maintain its secrets."

Profit And 'Peril' In The Secret Nuclear Trade

On the intelligence committees in Congress

"But the intelligence committees are so understaffed and overwhelmed by the largeness of the task. There are literally only one handful of staffers who have any expertise in the National Reconnaissance Office, which is the office that manages spy satellites and happens to spend tens of billions of dollars a year to do that. It's a critical function. Those handful of staffers — half of them are very inexperienced — because there's a relatively high turnover. That's your oversight."

On why she wanted to report on this

"Watching social programs overseas that are meant to deal with terrorism in a different way — not in a military way — be killed because of funding or be underappreciated because they couldn't show results on paper quickly, while there was so much waste in this area."

On the secrecy surrounding JSOC

"It's all shrouded in secrecy and in this case, a level of secrecy that's beyond all others so it's hard for the public to know not only what they're doing but whether those actions are effective or whether they're counterproductive. ... Whatever they do — and if they make mistakes — there is always a cleanup operation afterwards. There are always people in a village who hate what is being done and civilians are killed and that has happened repeatedly. The blowback for such secret operations is no longer secret. ... That is one of the downsides to being able to give the authority to one person or a group of people to use such a lethal weapon without the rest of the world knowing — because you're operating in the dark, by yourself, without the oversight you normally get."