Accessibility links
5 Other Surprise Attacks That Changed History Ten years after Sept. 11, 2001, we consider other clandestine assaults throughout history, from the Greek myth of the Trojan Horse, to the Sack of Rome, to the Revolutionary War and beyond. Why the element of surprise may have special power to topple civilizations.

5 Other Surprise Attacks That Changed History

5 Other Surprise Attacks That Changed History 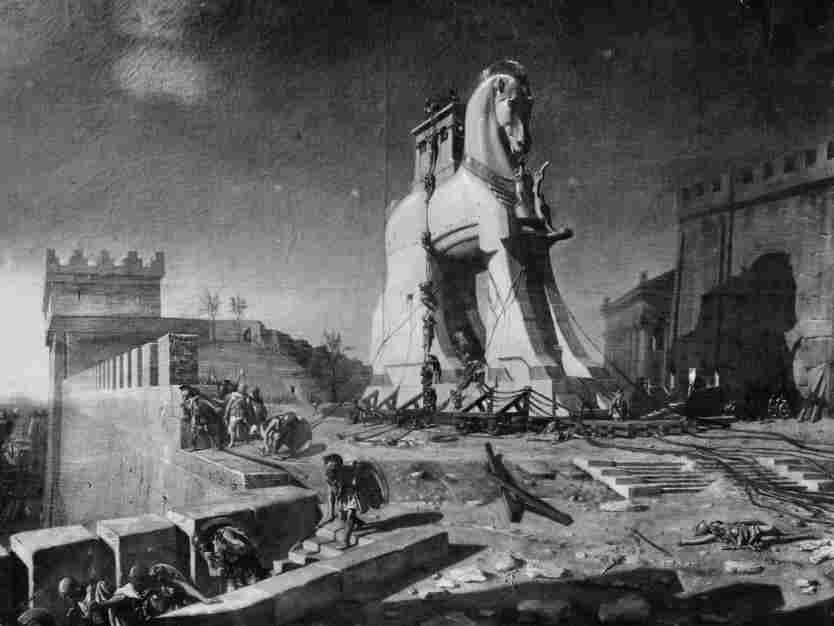 One of the earliest accounts of a surprise attack comes from Greek mythology: the Trojan Horse. Rischgitz/Hulton Archive/Getty Images hide caption

The headline writers at USA Today put it this way: "9/11: How One Day Changed Our World." National Geographic observed that the attacks of Sept. 11 would "alter the course of history."

But the shocking assaults in 2001 on the World Trade towers, the Pentagon and the planned hit on the Capitol were not the first surprise attacks that changed the way humans do business.

Through the centuries, there have been unexpected strikes on civilian targets that occurred during wars — declared or not — and peacetime attacks that came completely out of the blue. The Sept. 11 attacks fall into the latter category.

Sudden assailments have toppled societies and shaken civilizations. The element of surprise can be a very potent change agent. And, perhaps, the most powerful weapon of all.

One of the earliest accounts of an epic surprise attack comes from Greek mythology: the Trojan Horse. The episode, explains George Dameron, a history professor at Saint Michael's College in Colchester, Vt., is associated with the 10-year war between Greeks and Trojans.

In one version of the tale, the Greeks finagle a way to get a large wooden horse inside the City of Troy. Inside the horse, Greek warriors hide. They emerge and, in a surprise attack, defeat the Trojans.

"The story may be based on an actual war," Dameron explains, "but the account of the war was certainly embellished over the centuries" between the event — fought during the 12th or 13th century B.C., the ancients believed — and its recounting in The Odyssey, written by Homer circa the 8th century B.C.

Virgil's first century poem, The Aeneid, tells the story of the Trojan Horse from the point of view of the Trojans, Dameron says, "and not only is it one of the most beautiful poems ever, but it is one of the most moving accounts of the wanton destruction of an entire city from the point of view of the victims. No one today can read the story of Troy's destruction by the 'treacherous' Greeks without being moved."

Virgil's description of Troy's destruction, Dameron says, provides the back story for events that ultimately led to the founding of Rome.

And the mythic success of the Trojan Horse victory set a high bar for surprise — and world-changing — attacks that followed through the eons.

We asked Dameron and a handful of other historians from around the country to help us examine other clandestine attacks throughout history. Here are five:

1) The Sack of Rome by the Visigoths, A.D. 410. Aided by rebellious slaves, Alaric I and the Visigoths rushed through a city gate unexpectedly. The three-day siege was the first time in centuries that Rome had been sacked and invaded, says Dameron, "and it was a massive political and psychological blow." Non-Christian Romans blamed the sacking on the abandonment of the traditional Roman gods.

The ultimate surprise there, adds Johns Hopkins University military historian Mary Habeck, "was that Rome fell, not that the city was attacked."

2) The Battle of Trenton, 1776. On Christmas night, Gen. George Washington crossed the ice-chilled Delaware River to lead some 2,400 Continental Army troops on an unexpected raid against German Hessian mercenaries garrisoned at Trenton, N.J. The Patriot forces caught the British-sponsored enemy completely off guard, says Brad King, executive director of Battleship Cove naval ship museum in Fall River, Mass. "The lasting effect was that the success raised rebel morale and proved that the most professional army in the West could be beaten."

3) The Battle of France, 1940. Speaking to the Council on Foreign Relations in 2007, Ernest R. May, a professor of history at Harvard University and author of Strange Victory: Hitler's Conquest of France, said that the Germans' "successful surprise attack" on France altered the way the world regarded France and the way that France regarded itself.

Before the Nazi campaign, May said, "almost everyone said that France had the strongest army in the world." But after Germany's victory, he continued, "almost everyone thought this had been an illusion. The French military was accused of a Maginot Line mentality, defeatism, cowardice. The Germans were taken to have been overwhelmingly superior militarily and to have had will to win which the French lacked. These became, and to some extent remain, articles of faith in France."

The plan for the Sept. 11 attack was, like the German plan, "based on knowledge obtained from open sources, not on secret intelligence," May said. And "the analysis underlying the plan rested largely on suppositions about the enemy's standard operating procedures."

4) The Japanese attack on Pearl Harbor, 1941. The morning assault by the Imperial Japanese Army on the U.S naval base in Hawaii changed the shape of the already-raging World War II "by bringing America in with its freshness and manufacturing capacity," says Brad King of the Battleship Cove museum.

The attack also refocused American foreign policy in profound and everlasting ways. Speaking on National Pearl Harbor Remembrance Day in 2008, then-President George W. Bush said, "On Dec. 7, 1941, the enemy nearly destroyed our Pacific fleet, and the United States was forced into a long and terrible war. A generation of Americans stepped forward to fight for our country. Their message to America's enemies was clear: If you attack this country and harm our people, there is no corner of the Earth remote enough to protect you from the reach of our nation's armed forces."

5) The Six Day War, 1967. On the morning of June 5, Israeli planes surprise-attacked the at-rest Egyptian air force, destroying hundreds of planes. Similar strikes hobbled Jordan and Syria. On the ground, Israeli troops marched into the Sinai Peninsula and the Gaza Strip. They routed Palestinians from the West Bank of the Jordan River, seized the Golan Heights in Syria and continued on to the Suez Canal. The rapid chain of events altered the landscape and the future of the Middle East — and, arguably, foreign policy in state departments around the world.

The Art Of War

Compiling such a list can be a complex undertaking. "Issues of scale, era and location complicate the question, as do the criteria for a 'sneak attack' — which is often viewed as a preemptive strike by those who launch it," observes military historian John W. Hall at the University of Wisconsin, Madison. "Rarely are such affairs complete and total surprises. In hindsight, it often emerges that the indicators for an attack were present but overlooked, or not placed in the proper context."

Hall suggests that Germany's unexpected — and unsuccessful — surprise invasion of the Soviet Union in 1941 be included on the list. "It is quite conceivable," Hall says, "that Hitler could have consolidated his territorial gains to that date had he not committed this most egregious of strategic blunders."

And noticeably absent from the roster are any Asian events.

There is a reason for that, explains historian David A. Graff, an associate professor at the Institute of Military History and 20th Century Studies at Kansas State University. "Tricks, traps, ambushes and other efforts resulting in the surprise of one party by another have been commonplace in Chinese warfare from as far back as we have records," Graff says. "The centrality of deceit in warfare was enunciated by Sun Tzu in the middle of the first millennium B.C. Deceit aimed at achieving surprise became so ubiquitous that it was almost like background noise, without the power to shock."

What gives events like Sept. 11 and Pearl Harbor their iconic power in our culture, Graff says, "is the ability of the victims to be shocked, and to perceive the attack as 'dastardly.' The Chinese have generally been more inclined to fault the victim for letting down his guard."