Accessibility links
After Nuclear Mishap, Japan Debates Energy Future The Japanese public is demanding that the country move away from nuclear power and toward renewable sources of energy. But it's a tall task for a country with few resources. 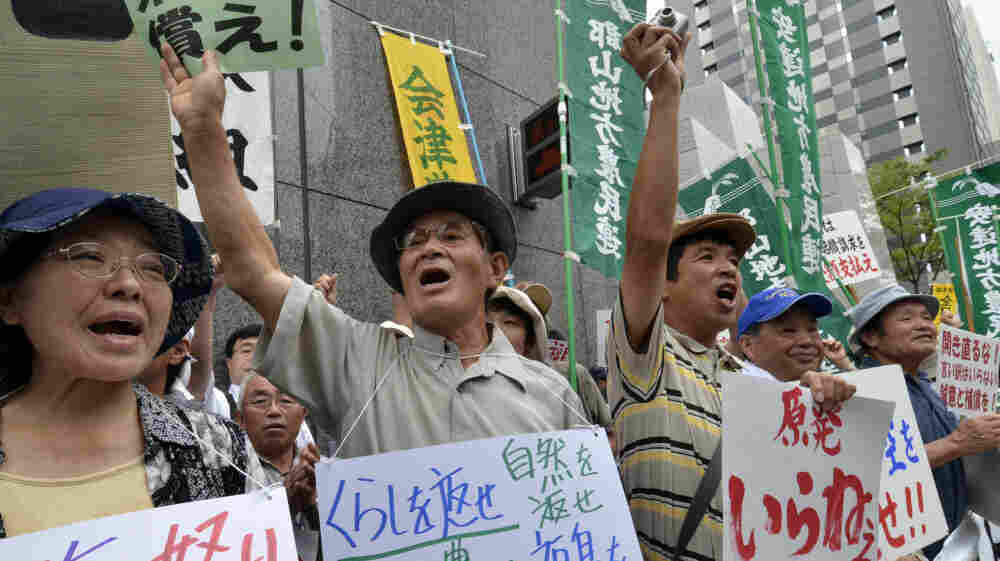 Farmers whose crops were ruined by a nuclear accident protest Aug. 3 at the Tokyo Electric Power Co. Many Japanese are calling for the country to lessen its dependence on nuclear power following the accident six months ago. Yoshikazu Tsuno/AFP/Getty Images hide caption

Japan faces a dilemma: The country lacks natural resources and relies heavily on nuclear power. But in the wake of a nuclear accident in March, 70 percent of Japanese now say they want to phase out atomic energy.

It's a huge, long-term challenge. Even backers of renewable energy say it could take two generations for Japan to become nuclear-free.

But Japan was taking action even before the accident at the Fukushima power plant on the country's northeast coast.

Japan's newest mega-solar project opened last month in the Tokyo suburb of Kawasaki City. Nearly 38,000 solar panels are spread across land the size of several football fields, and they can power more than 2,000 homes.

Tomomi Hasegawa, who works for the local environmental department, says solar energy has some big attractions in the age of climate change and nuclear fear.

"There are no exposed power lines, so it's very safe," he says. "It doesn't pollute or emit anything, so there's no pollution either."

People generally agree we should not add any more nuclear reactors. And any nuclear reactor that has been operated for 40 years should be de-commissioned. Then, by 2050, our nuclear power will be zero.

But there are limitations. In clear weather, the panels can generate up to 7,000 kilowatts a day.

However, on a not-so-sunny day, efficiency is lower, at about 3,000 kilowatts. And the panels take up space, a precious commodity in this crowded, mountainous archipelago.

Kawasaki City is so dense, the government had to squeeze the project onto an industrial waste site between the airport and Tokyo Bay.

Last month, Japan's legislature passed a bill to subsidize wind and solar power. The measure requires power companies to buy solar and wind energy at inflated prices. The idea is to make it worthwhile for companies to invest in expensive technology and speed up Japan's shift toward renewable energy.

Kono Taro, a member of Parliament in the opposition Liberal Democratic Party, says the strategy is to let nuclear power slowly die off.

"People generally agree we should not add any more nuclear reactors," Taro says. "And any nuclear reactor that has been operated for 40 years should be decommissioned. Then, by 2050, our nuclear power will be zero."

If that happens, it would be a stunning turnaround. Nuclear power now accounts for at least 25 percent of Japan's energy. Solar and wind power makes up just 1 percent.

Taro knows renewable energy has problems, but he sees ways around them.

"We are surrounded by the ocean, so we could do a lot of offshore wind power," Taro adds. 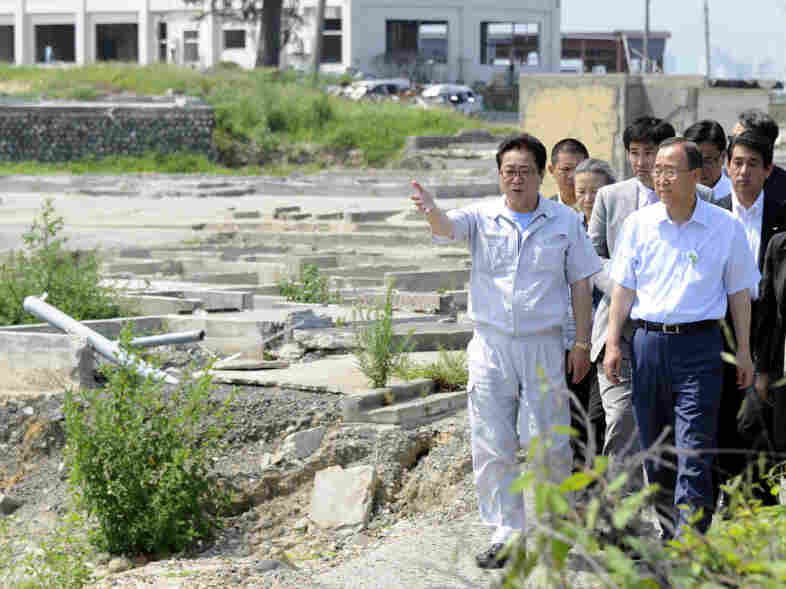 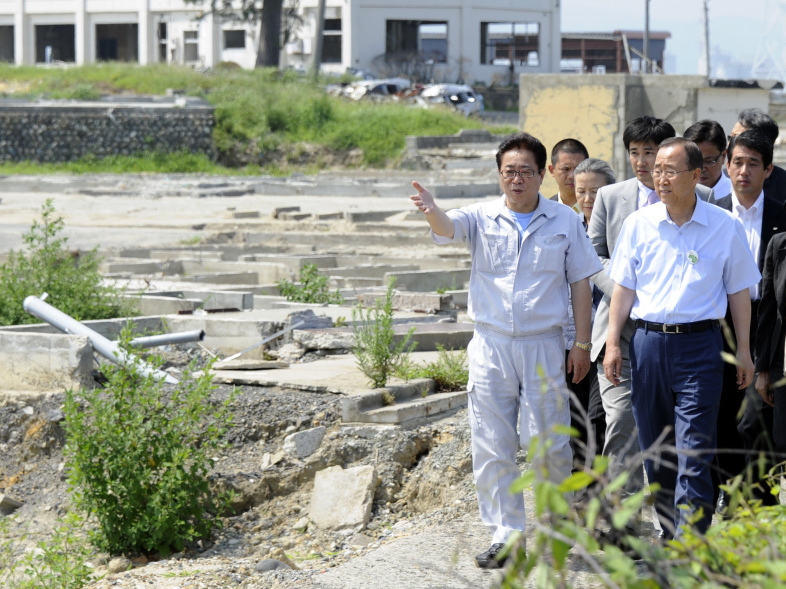 United Nations Secretary General Ban Ki-moon (right) receives an Aug. 8 tour around a devastated area in northern Japan. The nuclear accident linked to the tsunami has turned many Japanese against nuclear power.

Taro also notes that one of Japan's most powerful businessmen, Masayoshi Son of cellphone giant Softbank, has a novel idea for using farmland damaged by the tsunami in March.

"There are lots of rice fields where the seawater has covered and it's not fit to grow rice for some time," Taro says. "He wanted to rent it out and put mega-solar on top of it."

Taro says public opposition to atomic energy won't fade away. For one thing, the power plant in Fukushima prefecture is still leaking radiation and remains a cause of concern.

Japan's powerful nuclear energy industry is betting that the public will forget, and that fear will give way to economic realism.

"Almost all energies are imported from abroad: oil, natural gas, coal, even uranium," says Masakazu Toyoda, who runs the Institute of Energy Economics, a think tank.

Toyoda says reducing nuclear power in the near term will force the country to import more energy from overseas. He says that will drive up costs and hurt Japan's exporters, which are already taking a beating because of the high value of the yen.

"If we cannot provide sufficient energy at reasonable cost, the manufacturing industry will relocate factories from Japan to abroad," he says.

Companies in the developed world often make this sort of threat, though not everyone buys it. But Toyoda says years of heightened energy costs could do real damage to an economy that's been stuck in the doldrums for most of the past two decades.

"We would face the degrading of our living standard and we would lose our jobs," he says. "That is not something the Japanese people would like to see."

Toyoda thinks the new law will boost solar and wind power dramatically, but not enough to replace nuclear energy.