Accessibility links
Who Will Buy Hulu? The streaming video site owned by the TV networks ABC, NBC and Fox is up for sale, and companies like Google and Amazon have shown interest in buying. But there are plenty of variables at play, including the fact that as soon as Hulu's current owners give up their stake, its valuable content could disappear. 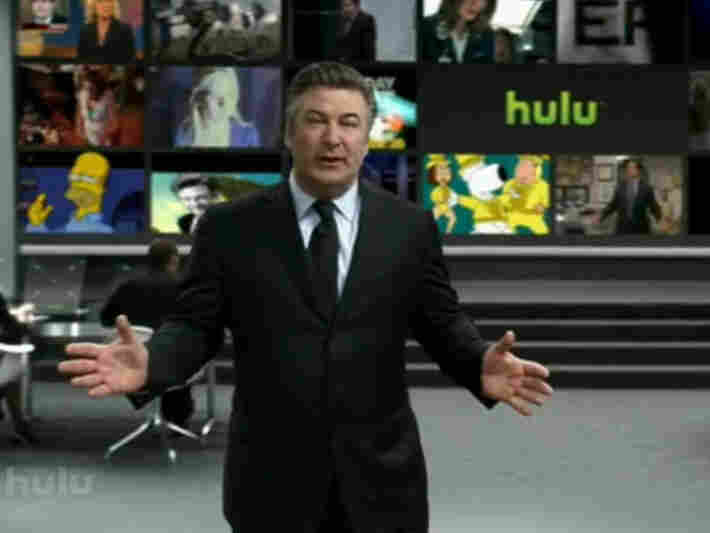 A large-scale promotional campaign launched by Hulu during the 2009 Super Bowl featured Alec Baldwin as a spokesperson. Courtesy of Hulu hide caption 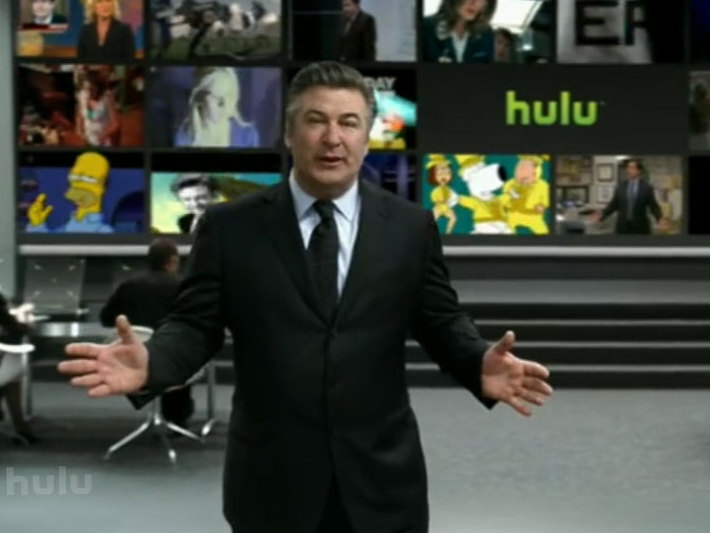 A large-scale promotional campaign launched by Hulu during the 2009 Super Bowl featured Alec Baldwin as a spokesperson.

For people who watch TV and movies over the Internet rather than the airwaves or cable, Hulu is one of the most popular sources of content. The company has offered streaming, on-demand access to select television shows and movies since it launched in 2008. Now, the site's owners are looking to cash in, and some big guns — including Google, Amazon, Yahoo and Dish Network — are showing interest.

Why Hulu's corporate owners would want to sell in the first place is a question that many in the industry are asking. Even though Hulu made its name by providing free streaming access to shows like 30 Rock, Family Guy and Modern Family (as long as you sit through a few commercials), it has reportedly nabbed nearly 1 million subscribers since it launched a paid service last year that offers more shows for $7.99 per month.

Nicholas Carlson, the deputy editor of Business Insider, says Hulu's incentive to sell stems from the fact that its owners actually compete with one another. Those owners are the corporations — The Walt Disney Co., Comcast/General Electric and News Corp. --- that own the major TV networks ABC, NBC and Fox, respectively.

"There's really too many parents in this family," Carlson says. And they don't always play nice. "There were complaints a couple of years ago about Hulu salespeople going out and pitching against ABC salespeople who also show video on Internet, and they're undercutting their prices."

Now may also happen to be a very good time to sell Hulu, since every major Internet provider wants to offer its customers premium TV content that it can sell to advertisers. The price tag for the site could be as much as $2 billion.

Bidders like Amazon are attracted to Hulu, says Carlson, because they'd like to beef up their current video business, and because owning the site could lay the groundwork for even more technological growth.

"Amazon is going to launch an iPad rival, a clone, so to speak, later this year or the beginning of next year," Carlson says. "I've heard that Amazon is thinking a Hulu-branded tablet would be a great way to get consumers really excited."

Despite that potential synergy, Carlson says there's an even more powerful bidder.

"Google just has so much cash in the bank right now," he says.

Google already owns another streaming video site, YouTube, but despite that site's massive popularity, it has a weakness. "Birthday videos, videos of stunts — that stuff's very hard to sell advertising against," Carlson says.

How might Hulu change if it's sold? Nobody outside the company itself or its possible buyers really knows. But content is key. Marci Ryvicker, a senior analyst with Wells Fargo Securities, says that because ABC, NBC and Fox jointly own Hulu, they all have an incentive to provide content that people want to watch. If they sell, that may not be the case any longer.

"It's up to them to either continue providing or not," Ryvicker says. Without these networks' shows, Hulu won't be worth much. "No one's going to pay $2 billion for a company that won't guarantee a certain specific level of content, because again, that's all that Hulu really provides."