Accessibility links
Learn Lessons From Disasters? No, Thanks Hurricanes, tornadoes, earthquakes — oh my. All manner of natural disasters have struck the U.S. this year, causing record damage and loss of life. Still, it's unlikely any major changes in building practices will occur.

Learn Lessons From Disasters? No, Thanks

Learn Lessons From Disasters? No, Thanks 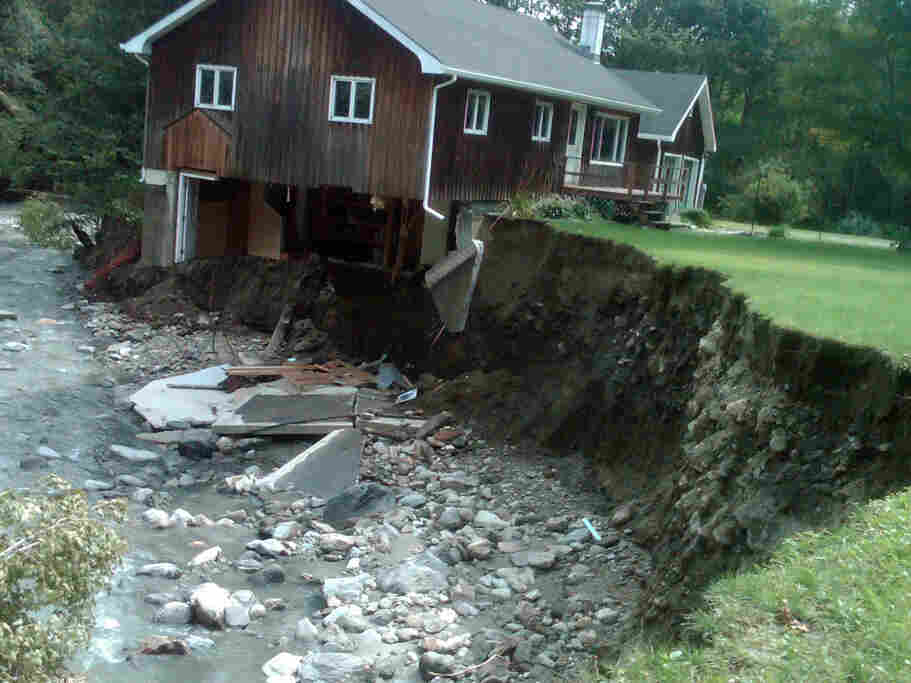 A house in Rochester, Vt., was destroyed by hurricane turned tropical storm Irene. Although more places may be at risk from natural disasters, there's been no rush to modernize safety standards. John Curran/AP hide caption

The seemingly unbroken run of news this year about earthquakes, floods and wildfires will prompt lots of discussion about how and where houses get built, in hopes of making them safer.

But chances are that few regulatory changes will actually occur.

Rewriting the codes that regulate building practices is a long, drawn-out process that encounters push-back every step of the way from home builders and other property-rights advocates, because of their concern about the impact on the cost of construction.

And even people who have experienced disaster can quickly grow complacent, convinced that lightning — literally or figuratively — won't strike in the same place twice.

"People don't think it's going to happen to them more than once," says Julie Rochman, president of the Insurance Institute for Business and Home Safety.

"After a terrible tornado hits, people think, 'What are the chances that another tornado is going to hit my house again in the time I'm living here?' " Rochman says. "We get a disease known as disaster amnesia."

Earlier this year, state officials in North Carolina signed off on an agreement to weaken building codes that pertain to protection against wind damage. It was a trade-off. They wanted to raise energy efficiency standards in order to qualify for federal grants, so they made a deal with the North Carolina Builders Association to soften other requirements to help offset the cost.

But in April, some 60 tornadoes ripped across Raleigh and other parts of the state, killing more than 20 people. That quickly ended talk of weakening wind codes.

Safety advocates say that North Carolina lawmakers shouldn't have needed that timely reminder. The state has repeatedly been battered by big storms, including Hurricane Fran in 1996 and Hurricane Floyd in 1999 — and, more recently, Hurricane Irene.

After a terrible tornado hits, people think, 'What are the chances that another tornado is going to hit my house again in the time I'm living here?' We get a disease known as disaster amnesia.

"If you turn your back on a code and it's in a community where there hasn't been an event for a while, there's going to be a move to weaken the code," says Leslie Chapman-Henderson, president of the Federal Alliance for Safe Homes, a nonprofit advocacy group. "This is a perpetual process in the United States."

When Emotions Are Raw

Florida — a flat peninsula vulnerable to hurricanes on three sides — enforces strict building codes. And states up and down the West Coast have learned to take earthquake protection seriously.

Such places are largely the exception, however. Even after the enormous damage wreaked by Hurricane Katrina in 2005, Alabama and Mississippi still lack statewide building codes of any kind. Louisiana did strengthen its codes in response to that storm, but its enforcement of them is generally considered weak.

"I've seen this over and over again," says David Prevatt, a professor of civil engineering at the University of Florida. "If we don't get something passed immediately after the disaster, when memories are fresh and emotions are raw, typically nothing will get done for a very long time."

Joplin, Mo., did quickly adopt stronger wind codes after a May tornado killed more than 150 people. But despite serious damage to a third of the city, many people there questioned whether it was worth adopting such protections, given the odds of being struck by high winds again.

Even places that have been hit repeatedly by the same sort of disasters can drop their guard. The Gulf Coast of Texas, for example, is among the most flood-prone parts of the country. But new houses are built all the time along flat, coastal areas. And local jurisdictions vary widely in terms of whether they require basic protections such as storm shutters.

"Other than New Orleans, this is one of the most vulnerable places in the country for hurricane impacts," says Samuel Brody, director of the Center for Texas Beaches and Shores at Texas A&M University in Galveston. "But the recognition of hurricanes and vulnerability is counteracted by the desire to develop the landscape and reap what are usually short-term economic gains."

How Much Is Enough?

The additional costs that would result from safety mandates are often exaggerated, says Jim Wilkinson, executive director of the Central U.S. Earthquake Consortium in Memphis. Nonetheless, he concedes that builders, politicians and residents may all have different priorities than paying more for greater safety.

The Price Of Disaster

There have been 10 billion-dollar disasters in the U.S. so far this year — a record number — causing more than $40 billion in estimated damages.

This winter marks the 200th anniversary of a series of quakes along the New Madrid fault that was centered between St. Louis and Memphis but could be felt as far away as the East Coast. Scientists are convinced that a quake of comparable size will hit the area again, perhaps in our lifetimes.

With the area so much more populated, the amount of damage would be staggering. But 200 years is a long time between major disasters.

Even though there have been dozens of small quakes in Arkansas this year, local officials throughout the region remain reluctant to update their codes to protect against something that might not happen for decades.

"There's that continual debate, whether it's Memphis or Arkansas or Kentucky," Wilkinson says. "How strong is strong enough, and should we be building to a code comparable to California?"

States including Tennessee and Hawaii have passed laws in recent years requiring local governments to update their codes and make them more uniform. Those laws have mostly been ignored, however.

Soon after a disaster, many people stop worrying about it happening again. And the full impact of rebuilding costs is often masked, thanks to federal assistance. Why pay now, when someone else will pay later?

The tornadoes that touched down this spring in Joplin and Tuscaloosa, Ala., caused roughly $6 billion worth of damage — or about 3 percent of each state's GDP, says Prevatt, the Florida professor.

"The only reason Joplin or Tuscaloosa was not an even larger issue is that we have spread that loss over 300 million people," he says.

It Will Happen Here

For that reason, many people question the wisdom of federal flood insurance and other programs that encourage people to rebuild in the exact place where disaster has already struck.

"If you want to build in an inherently dangerous location, I would say more power to you — but the taxpayer shouldn't be paying to rebuild your place," says Ed McMahon, a senior research fellow at the Urban Land Institute.

With the advent of climate change, McMahon notes, more and more places will become vulnerable. Many states this year have coped with extreme floods or drought — or both.

Just in recent weeks, disasters have occurred in unexpected places, including a sizable earthquake in central Virginia and extensive tropical storm damage in Vermont.

"It's not just the places that are in the obvious danger zones, on the coasts or in the deserts," McMahon says. "It's every place."