Accessibility links
Glen Campbell's 'Canvas,' A Moving Farewell Album In the liner notes to his new album, Ghost on the Canvas, Campbell writes that it's the last studio record he plans to make after being diagnosed with Alzheimer's Disease. Rock critic Ken Tucker says the album "has a melancholy air of valedictory about it." 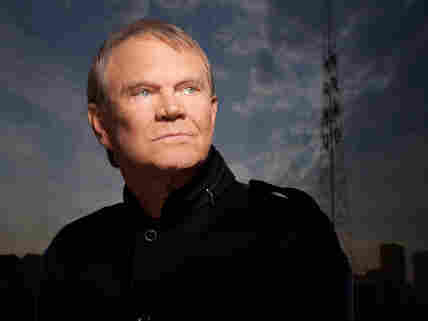 In the liner notes to his new album, Ghost on the Canvas, Glen Campbell writes that this is "the last studio record of new songs I ever plan to make." Campbell has been diagnosed with Alzheimer's Disease, and intends to perform a farewell tour before retiring from the music industry.

Ghost on the Canvas has a melancholy air of valedictory about it. Musicians you would normally not associate with Glen Campbell, such as Jakob Dylan, Cheap Trick's Rick Nielsen, The Replacements' Paul Westerberg, and Guided By Voices' Robert Pollard have all been enlisted to contribute to the album, and their work amounts to a fond farewell to a skilled, often charming musician.

The production work here by Julian Raymond has been compared to the collaborations that Rick Rubin did with Johnny Cash late in that country legend's life. But one flaw of Ghost on the Canvas is that, unlike most of Cash's final work, there's a heavy overlay of sentimentality that occasionally weighs it down. The sound of Campbell's increasingly wavering, aging voice — he's 75 now — would have been sufficiently poignant. But then again, unlike Cash, Campbell himself has always been drawn to extravagantly emotional work, particularly that of Jimmy Webb. Webb doesn't appear here, but the album's title song, written by Paul Westerberg, is very much in Webb's grandiloquent tradition.

Glen Campbell has been a prominent, if sometimes elusive, presence in pop music since the 1960s. People who know him primarily from his Jimmy Webb-written hits such as "Wichita Lineman" and "By the Time I Get to Phoenix" frequently do not know about his early career as a Hollywood session guitarist. In the late '60s, Campbell was part of the so-called Wrecking Crew, a storied house band that played behind such hits as The Byrds' "Mr. Tambourine Man," The Righteous Brothers' "You've Lost That Lovin' Feeling" and Elvis Presley's "Viva Las Vegas." At one point, Campbell was a temporary Beach Boy, touring with the band in place of the emotionally fragile Brian Wilson. Teddy Thompson has written an upbeat, Beach Boys-y song for Campbell to sing on the new album called "In My Arms."

It would be hypocritical of me to say at this point that I've long been a big fan of Campbell's music. The overwrought qualities that characterize some of the music on Ghost on the Canvas have curtailed some of the pleasure I could take from his work. But I always respected his guitar playing and liked Campbell's public personality, on display in television — yes, I'm old enough to remember The Glen Campbell Goodtime Hour, in which he used his commercial clout and down-home Arkansas charm to give face time to lesser known artists he admired, such as Willie Nelson. Ghost on the Canvas is, overall, an honorable and at times moving piece of work. I wish Glen Campbell the best life he can possibly have.