Accessibility links
The Man Who Roped Investors Into A Cattle Con In 2008, in Howard County, Mo., a crook was defrauding dozens of farmers across the country with the Midwestern version of the Ponzi scheme. Kevin Ray Asbury sold top-shelf Angus cattle to investors with the promise that they'd make money. And he made millions before his scheme was discovered by a small-town sheriff. 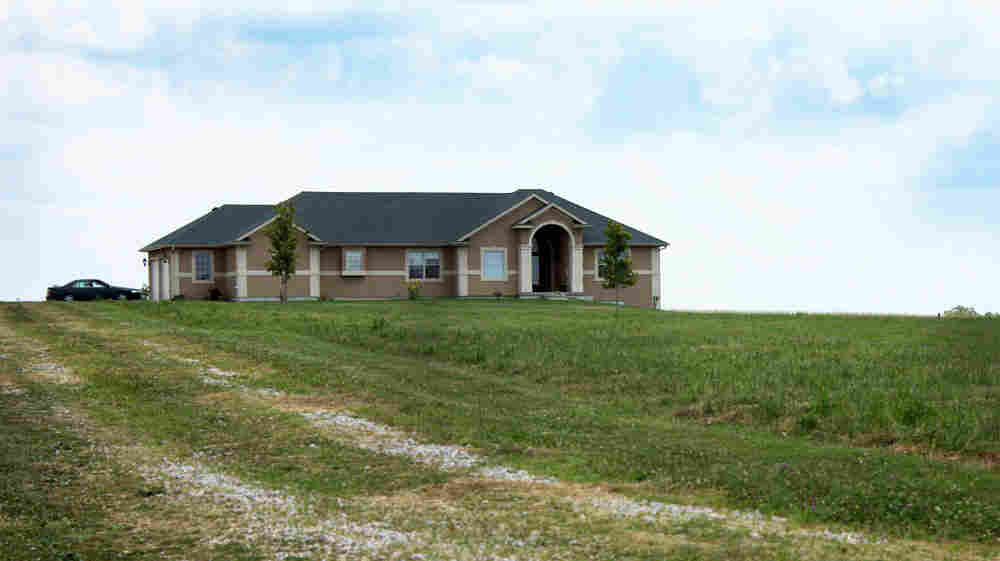 Kevin Ray Asbury, who this summer pled guilty to three counts of fraud for promising the same cows to multiple investors, built a million-dollar home and drove around in a Mercedes. Jessica Naudziunas for NPR hide caption

What do you get if you combine the Ponzi-scheme of Bernie Madoff with a wily Midwestern rancher?

While Madoff's mastermind plan was becoming clear in New York, out in tiny Howard County, Mo., there was another crook who was swindling dozens of farmers across the country.

For two years, mustachioed and smooth-talking Kevin Ray Asbury ran a racket that went a little something like this: He lured customers with top-shelf Angus cattle. They would buy into the herd, or sell their own for breeding.

The only problem was Asbury kept using the same cows, telling multiple investors they were theirs. With their money, he moved on up — built a million-dollar home and drove around in a Mercedes. Everyone in town just thought he was doing really well — until the scheme cracked.

How The Scheme Unraveled

All at once 27 people across several states — some as far away as California — began raising the alarm. They all came to one person first: small town Sheriff Charlie Polson.

Polson runs a bare-bones police force in Fayette, Mo. — a town where you trust your neighbor and your neighbor's neighbor. 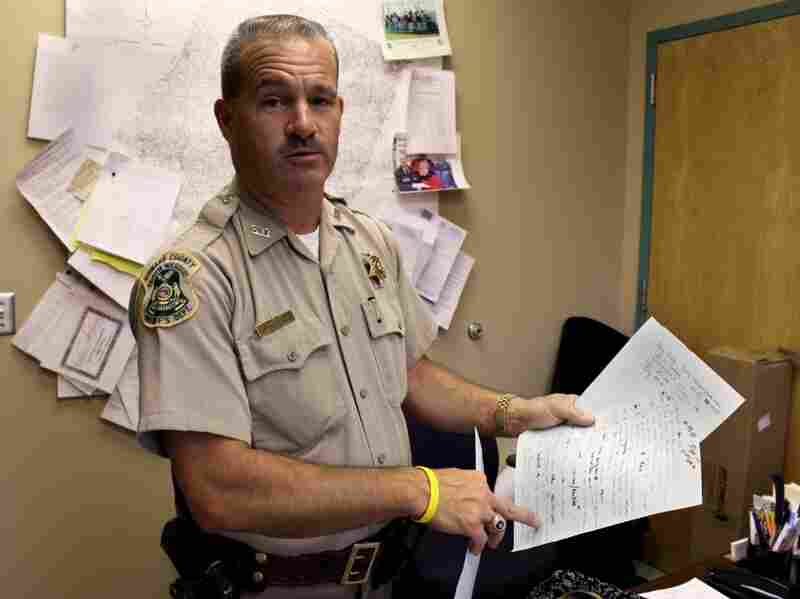 Sheriff Charlie Polson, who runs a bare-bones police force in Fayette, Mo., kept a handwritten list with the names of the people across several states who raised an alarm about Kevin Ray Asbury. Jessica Naudziunas for NPR hide caption 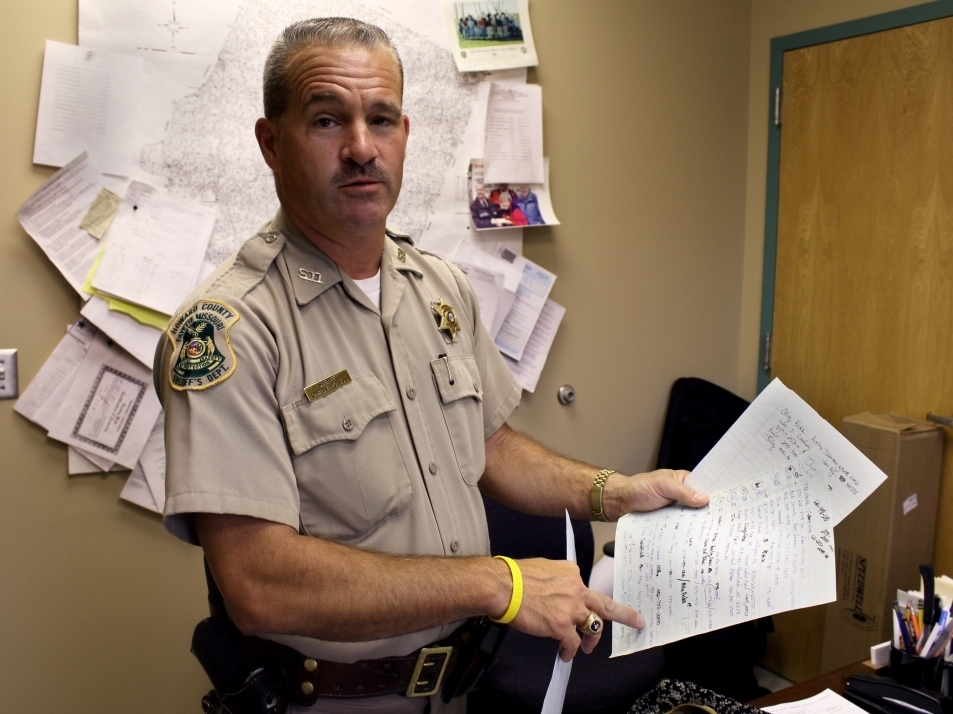 Sheriff Charlie Polson, who runs a bare-bones police force in Fayette, Mo., kept a handwritten list with the names of the people across several states who raised an alarm about Kevin Ray Asbury.

"Evidently [Asbury] had a good line that people believed in, so you see where it gets you, and several of the victims said, 'No, I just took him for his word and wrote him a check for $90,000,'" Polson says.

The sheriff went over to the ranch, and if you are near a place with that many cattle, you can tell with your eyes shut. But, there was nothing there.

Polson knew this case was bigger than any other in his county, and the victims were getting restless, some threatening to ride into town with guns blazing. Then came a complaint from a couple nearby who reported a bad check from Asbury for $32,000. Polson wanted to arrest Asbury right there on a felony charge, but Asbury's brother Randy, who is now a state legislator, paid less than a fourth of the bad check to keep his brother Kevin out of jail.

"I felt that possibly I could've maybe brought some justice to some of these individuals if I could've arrested him and put him in jail and started the first criminal proceedings that I had," Polson says.

He urged the couple to decline the payoff, but they were out tens of thousands of dollars and wanted to pay their bills. They ended up being some of the only victims to get any restitution.

I can say and I've said many times 'If it sounds too good to be true' until I'm blue in the face, but there are still going to be willing victims out there and people who just don't listen.

The others were like Jim Steinmetz, who was a successful farmer long before he got caught up with Asbury.

On a recent day, Steinmetz is parked at the end of a rocky driveway off a rural road about 40 minutes from his home. He gets out of his black flat-bed pick-up truck, leans against it and looks down. Out here standing on the parched grass, it's well over 100 degrees and flies are buzzing in the heavy air. Behind him is huge new house that seems out of place.

"And that's the house that they built, and I know he was just getting moved into it when everything started to happen," he says.

In 2008, Steinmetz invested over a half million dollars in what he thought was a good opportunity. He expected a strong return from owning the high-quality Angus cattle. Right now in Missouri, the going price for the type of cow Asbury offered could fetch over $1,000 each. It was fine for a few months, the ranch was full of cows; then just three months after the money changed hands, the pricey Angus cattle disappeared. Squinting into the midday sun, he can hardly bring himself to look at this house because he's one of the people who helped pay for it.

"This is the first time I've been back," he says. "I didn't want to torture myself. The only thing you can possibly do is get yourself in trouble if you come back over here. That's why you don't come by. Bad memories."

The money, trust and cattle were gone. To this day, no one who was scammed could tell you where their cows ended up, or if they ever really had any. 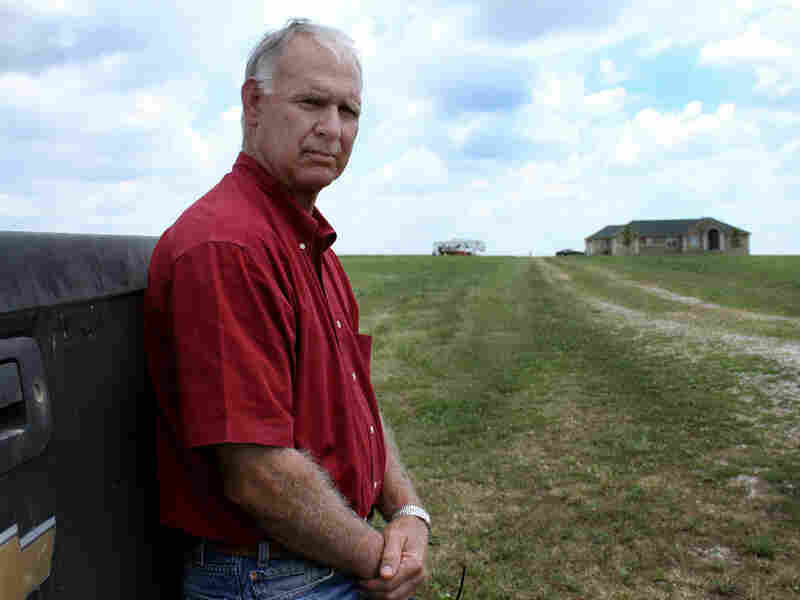 Jim Steinmetz, who was a successful farmer well before he met Asbury, invested more than a half million dollars on Asbury's Angus cattle. And Steinmetz lost it all. Jessica Naudziunas for NPR hide caption 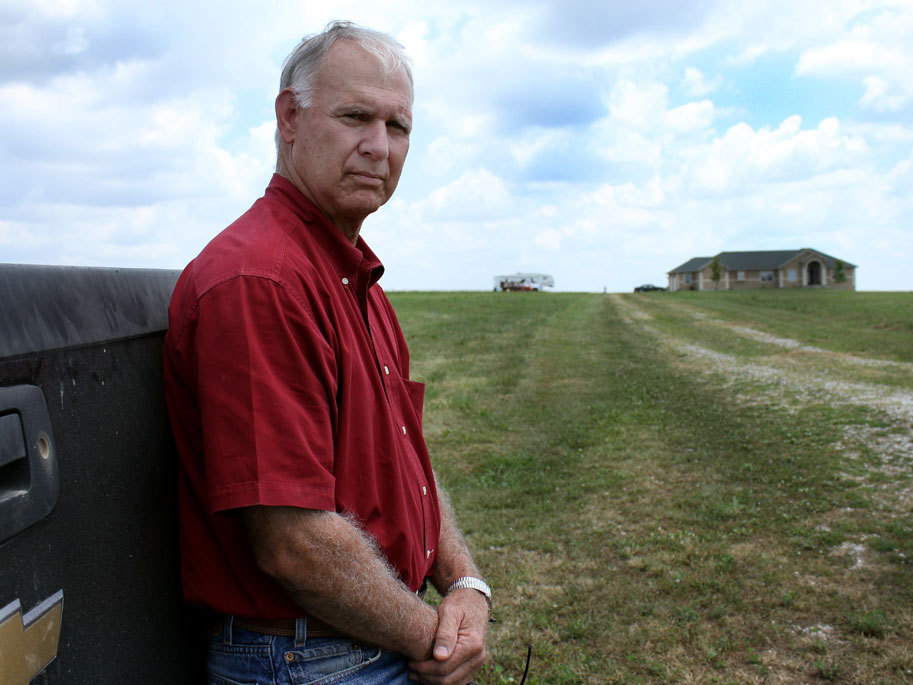 Jim Steinmetz, who was a successful farmer well before he met Asbury, invested more than a half million dollars on Asbury's Angus cattle. And Steinmetz lost it all.

In the summer of 2008, Kevin Asbury was getting nervous; he knew what everyone else now knows, too. So, he fled to Florida. His victims were out more than $5 million.

The drama crested when officials at the oldest bank in Missouri, The Callaway Bank, realized they'd been hit. They had provided Asbury with a $4 million line of credit almost sight unseen, after he showed their agriculture specialist some cattle that, it turns out, were on someone else's land. The FBI was called in. Later, the bank ended up losing more than $2 million.

Asbury and his lawyers declined to comment for this story.

So, thousands of nonexistent cows, and a local boy rolled around in luxury out of nowhere, but no one asked any questions. Were these victims or fools, taken in by rural America's Bernie Madoff of cows?

"You can be a victim and a fool," says Jeff Lanza, a retired FBI agent who spent 20 years investigating corruption and fraud in Kansas City. He's seen it all.

"You know, I can say and I've said many times 'If it sounds too good to be true' until I'm blue in the face, but there are still going to be willing victims out there and people who just don't listen," he says.

That's little consolation back in Howard County, where you might say Sheriff Polson is Kevin Asbury's last victim, though he didn't lose money or cattle. This was actually the second cattle-rustling Ponzi-type scheme in Howard County in the last five years.

Kevin Ray Asbury pled guilty this summer to three counts of fraud and now awaits his sentence from a federal judge. At the most, it's expected he'll serve nine years in prison — about as long as it took him to turn from cattle rancher to Ponzi-scheme rustler.

Jessica Naudziunas reports from Missouri for Harvest Public Media, an agriculture-reporting project involving six NPR member stations in the Midwest. For more stories about farm and food, check out harvestpublicmedia.org.