Accessibility links
'Mosaic' Fossil Could Be Bridge From Apes To Humans A fossil find in a South African cave has scientists both excited and puzzled: It could be the missing link between our ape-like ancestors and modern humans. The mix of primitive and modern traits is also forcing scientists to re-examine the process of human evolution. 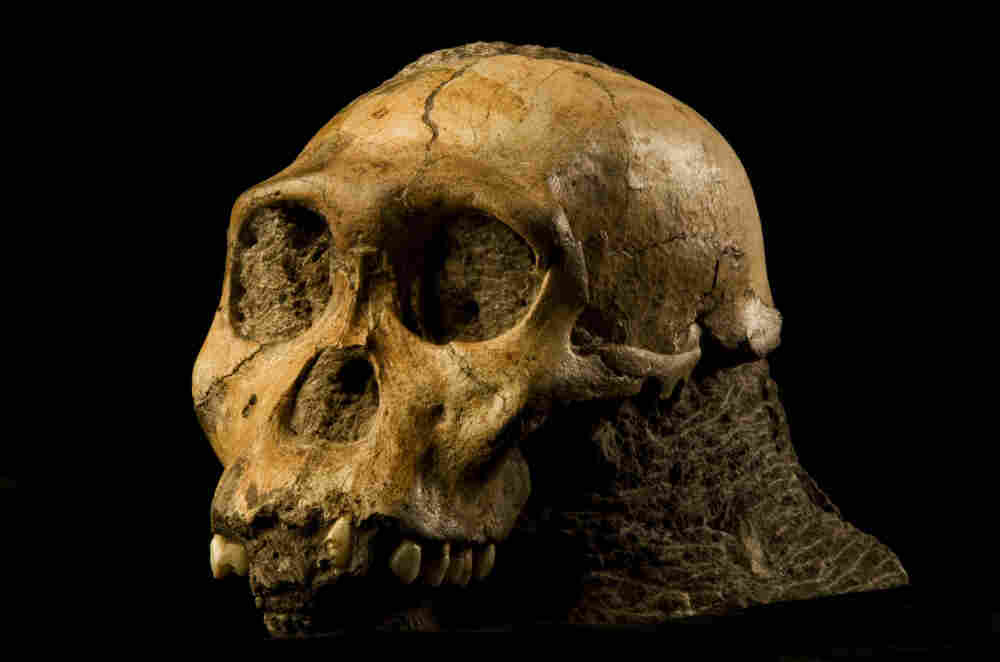 The fossil of Australopithecus sediba could be the long-sought transition between ape-like ancestors and the first humans. "It shows a small brain, but a brain that's beginning to reorganize in some ways that resemble our brain," says anthropologist Lee Berger. Brett Eloff via Lee Berger/University of Witwatersrand hide caption

A pair of fossils from a South African cave have scientists both excited and puzzled. Scientists say the fossils — an adult female and a juvenile — could be the long-sought transition between ape-like ancestors and the first humans.

Sediba likely still used his hands for climbing in trees, but it was likely also capable of making the precision grips that we believe are necessary to make stone tools.

The bones belong to creatures related to the famous Lucy fossil found in Ethiopia in the 1970s, but their owners lived more recently — just 2 million years ago.

The reason for the excitement? Ask anthropologists what they dream about, and many will tell you it's the fossil of the last pre-human ancestor that led directly to us. Nobody's found it, and any who claim to usually get publicly whacked by their peers.

Lucy and her kind — the diminutive, ape-like Australopithecus that lived 3.2 million years ago — may well have evolved into us, the genus Homo. But a lot happened in between Lucy and the earliest humans, who emerged just over 2 million years ago. The true "transitional" species must have lived about the time we emerged.

Now, we have the South African fossils, dated at 1.9 million years ago. Called Australopithecus sediba, anthropologist Lee Berger says this could be the one. "In our opinion it's probably the best candidate ancestor for giving rise to our immediate ancestor," Berger says. 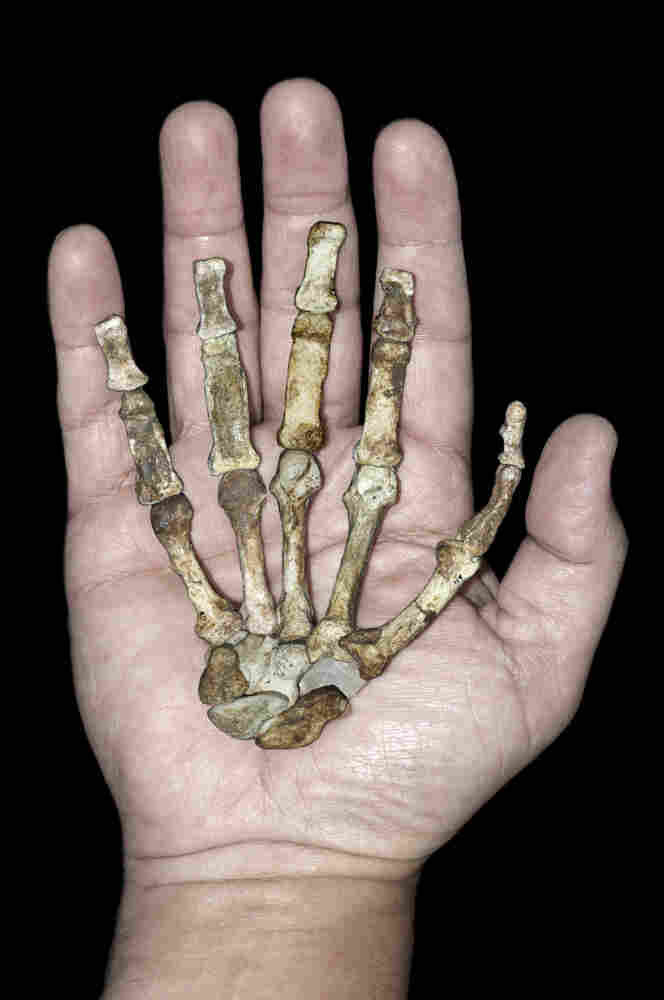 The hand skeleton of an adult Australopithecus sediba against a modern human hand. Anthropologists say the skeleton shows a "mix-and-match" anatomy, with traits of both primitive and modern animals. Peter Schmid via Lee Berger/University of Witwatersrand hide caption 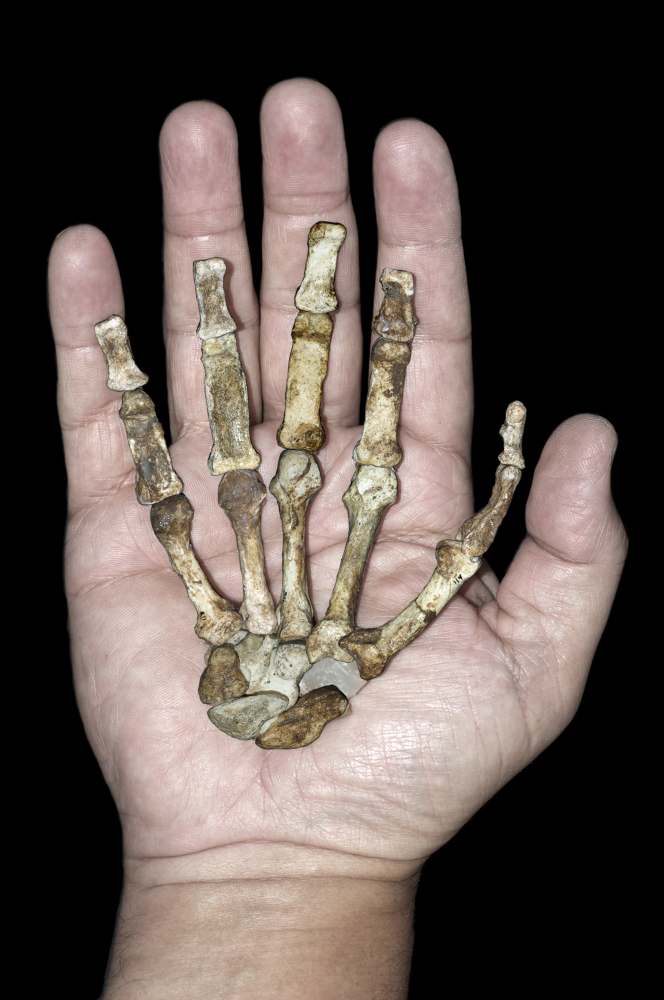 The hand skeleton of an adult Australopithecus sediba against a modern human hand. Anthropologists say the skeleton shows a "mix-and-match" anatomy, with traits of both primitive and modern animals.

It's the best candidate because Berger knows there were others at the time. Just before the earliest humans appeared, Africa was thick with all sorts of ape-but-not-ape creatures. The evolution of big-brained, walking, tool-making primates was like a river splitting into numerous streams.

Berger, at the University of the Witwatersrand in South Africa, says his two sediba fossils look like a real transition between Lucy's "people" and something pretty human-like. "It shows a small brain," he says, "but a brain that's beginning to reorganize in some ways that resemble our brain."

In fact, these two South African creatures were a mosaic, as if a child had assembled a creature by picking randomly from a box of Australopithecus bones and a box of human-like bones. "You have things like a heel bone that's as primitive as a chimpanzee, attached to the ankle bone that's as evolved as ours is," Berger says.

Sediba's hand is unusually complete and also shows a "mix-and-match" anatomy. "Sediba likely still used his hands for climbing in trees, but it was likely also capable of making the precision grips that we believe are necessary to make stone tools," says Tracy Kivell of the Max Planck Institute in Germany and a member of Berger's team.

One Of Many Possible Ancestors?

Berger assembled a large team of experts to examine these fossils and allowed many others to look at them. One reason is that proving you've found the "last ancestor before humans" is a high hurdle.

Brian Richmond, an anthropologist at George Washington University, is among several anthropologists who says sediba is exciting, but not ready to be anointed yet.

"It's starting to make the playing field really crowded," he says, "and right now it's not really clear which contender will end up winning the prize of being the ancestor of Homo."

There are fossils with human-like traits that are older than Berger's, and skeptics say sediba could have been one of many evolutionary experiments at the time, one that may have just died out — the stream just dried up.

Direct ancestor or not, the weird jumble of primitive and modern traits in sediba could rewrite textbooks. Connected features, like the arm and the hand, are thought to evolve together. But sediba had an ape's arm and a more human-like hand.

A Timeline Of Human Evolution

The skeleton of Australopithecus sediba dates to 1.9 million years ago, and skeletal features suggest it could be the best "candidate" ancestor to modern humans. Click the image below to explore a timeline of human evolution from the Smithsonian's Human Origins Initiative. 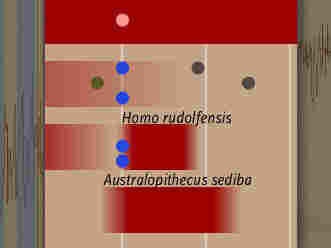 It is believed our ancestors developed a roomy pelvis as their brains got bigger to deliver bigger-brained babies. The brain and pelvis supposedly evolved in lock-step. So why, asks Richmond, is sediba's pelvis big and roomy, but its brain small?

"So we have to go back now and rethink what actually leads to the evolution of the pelvis in a particular way," Richmond says.

But it's not just the pelvis that needs to be studied — it's the whole human body. Rick Potts, head of the Human Origins Initiative at the Smithsonian's National Museum of Natural History, says these fossils force a rethinking of how humans evolved.

"The more we learn about human evolution," says Potts, "the more we see that traits we think must be coupled [if one thing happens, then so must another] were decoupled. This decoupling is really intriguing because it indicates the experimentation that was involved in evolution — the mixing and matching of traits in different populations over time and space."