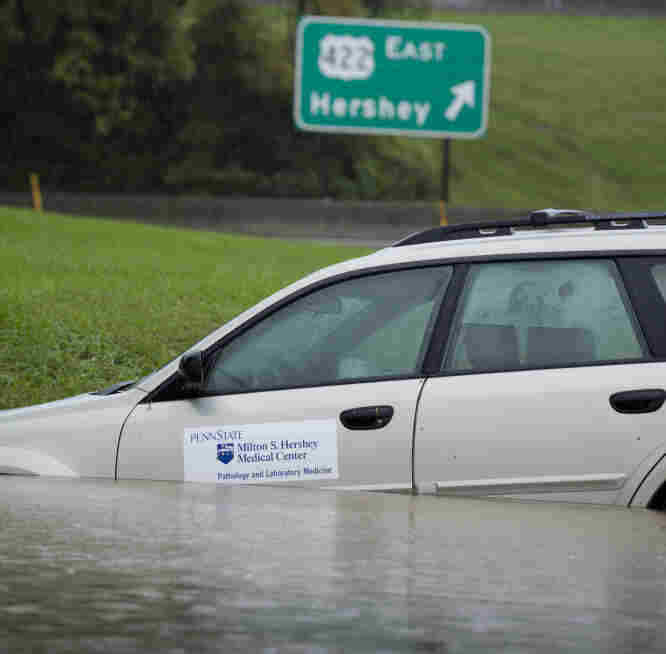 An abandoned vehicle is stranded less than a mile away from the Penn State Milton Hershey Medical Center in Hershey Pa. on Thursday. Daniel Shanken/AP hide caption 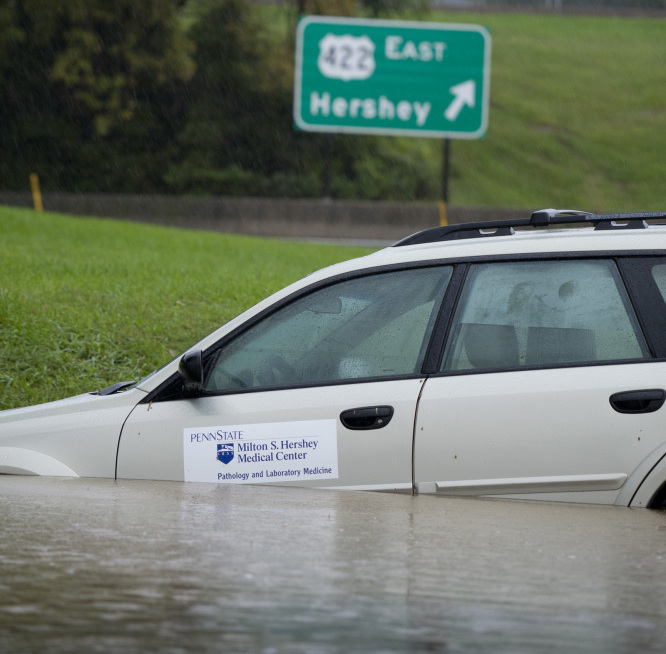 An abandoned vehicle is stranded less than a mile away from the Penn State Milton Hershey Medical Center in Hershey Pa. on Thursday.

Nearly 100,000 people from New York to Maryland were ordered to flee the rising Susquehanna River on Thursday as the remnants of Tropical Storm Lee dumped more rain across the Northeast, closing major highways and socking areas still recovering from Hurricane Irene.

"It's alarming how fast the river is rising — let's put it that way," said Luzerne County (Pa.) Commissioner Maryanne Petrilla. "You look out one minute and it's at one point and you look out 40 minutes later and it's ... It's rising at an alarming rate."

Petrilla said that after Hurricane Agnes in 1972, a levee system was built that should protect the area, as long as the river doesn't rise to more than 41 feet. Forecasters predicted Wednesday it would crest five feet below that, prompting authorities to issue a mandatory evacuation for 8 p.m. Thursday. But then, Petrilla says, the new forecast came in Thursday morning, predicting the Susquehanna will crest at 41 feet Thursday night, bringing it near the top of those levees.

It "caught us all by surprise, therefore we moved the hour of evacuation up to 4 o' clock," she said.

North of Wilkes-Barre in Binghamton, N.Y., Gov. Andrew Cuomo said it's "going to get much worse before it gets better."

Cuomo's director of state operations, Howard Glaser, says many were surprised Wednesday when the National Weather Service increased by eight feet how high the river was predicted to crest.

"It means the difference between a serious flood and a major flood, and, as people in Binghamton know, that reaches or exceeds the 2006 flood level, with projections of over-topping of flood walls, which we are beginning to see some of now," Glaser said.

Hartman is volunteering, answering calls at the university from residents with questions about what they should do. Meantime, she says there's no word if her own house has taken on water.

"It's right across from the river, unfortunately, so it's probably going to be flooded by the time I get home, whenever that is," she said.

All this comes to a region that already has been battered by weather. There was Hurricane Irene last month and near-constant, record amounts of rain that has left much of the ground unable to soak up any more water.

Ray Succar spent Thursday cleaning out the flooded first floor of his house in Wayne, N.J.

"We have to deal with the mildew and it's been humid so we've been using fans to air out the house constantly," he said. "And, unfortunately, now with the weather conditions we're expecting more flood.

At least nine deaths have been blamed on the storm that hit the Gulf Coast last week as Tropical Storm Lee and has slogged northward ever since. Four people died in central Pennsylvania, one was killed in Maryland and four others died earlier when Lee hit the South.

Roads and highways closed around the Northeast, including sections of New York's Interstate 88, which follows the Susquehanna's path.

In Philadelphia, heavy rain and flooding led to a very frustrating commute Thursday morning. Some trains into the city were unable to run and one of the main freeways to downtown was closed while crews removed a mudslide that blocked the road.

New York's Thruway Authority expected to close a 105-mile stretch of its busiest east-west highway, Interstate 90, because the nearby Mohawk River had overflowed its banks in some areas.

The National Weather Service predicted 4 to 10 inches of rain across the mid-Atlantic and Northeast through Thursday. Flood watches and warnings were in effect from Maryland to New England.

NPR's Jeff Brady in Philadelphia contributed to this report, which includes material from The Associated Press