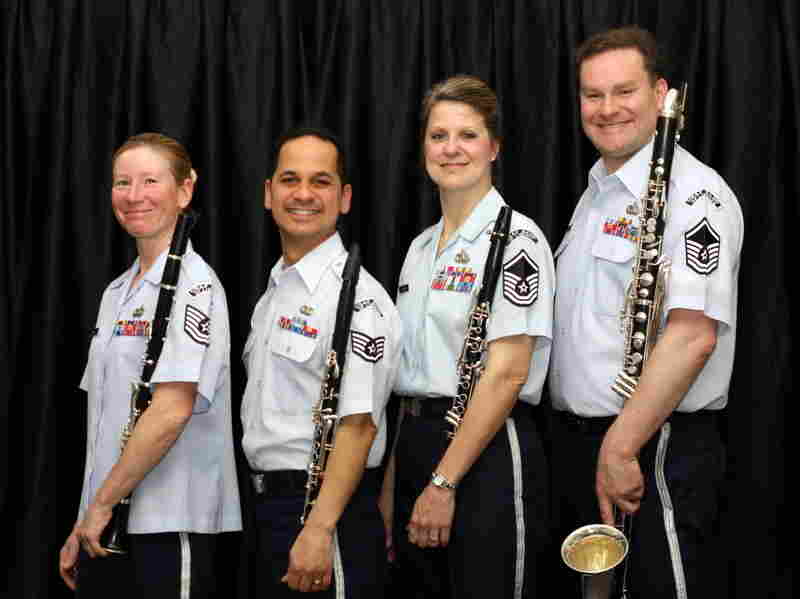 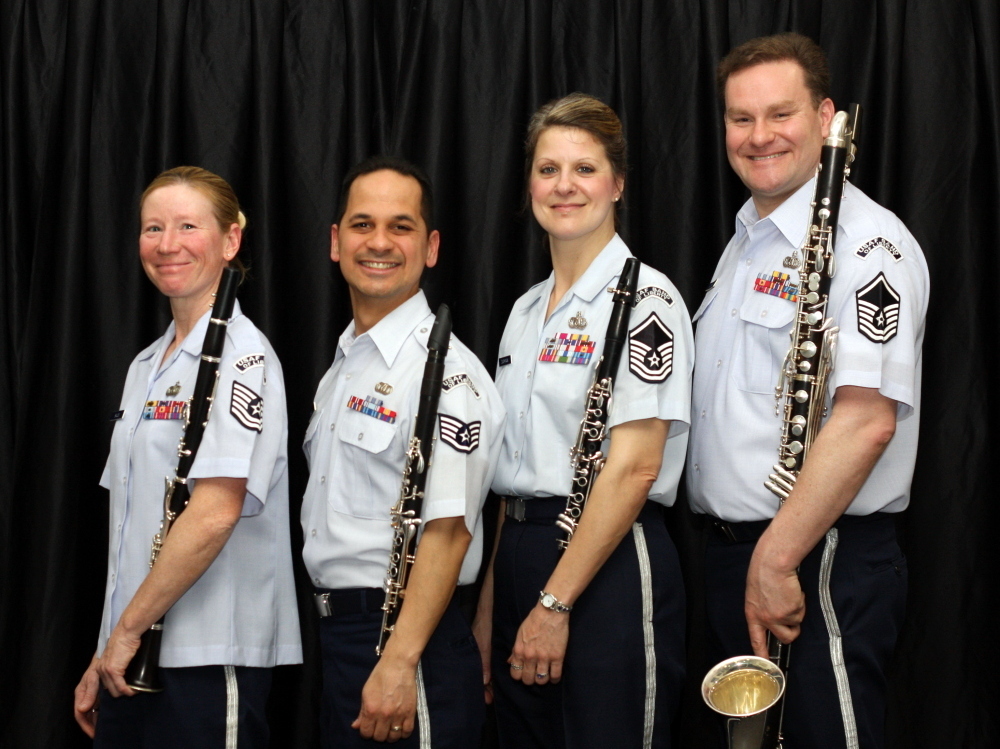 The Bay State Winds, the clarinet quartet of the Air Force Band of Liberty, plays music ranging from patriotic songs to Bach to Broadway. The three clarinetists and one bass clarinetist who make up the group routinely play for community members and troops both stateside and overseas.

On today's episode of Fresh Air, The Bay State Winds (Master Sgt. Jennifer Dashnaw, Master Sgt. Kevin Connors, Technical Sgt. Christy Bailes and Staff Sgt. Matthew Ayala) join host Terry Gross for a discussion of what it's like to be a musician in the military. All four members of the ensemble enlisted after their Air Force auditions because they wanted to be professional musicians while serving their country. And, like other members of the Air Force, the band members went through basic training — an eight-and-a-half-week boot camp in which they learned how to operate weapons, administer first aid and survive combat situations — before they joined the band unit.

More From 'The Bay State Winds'

'The Marriage Of Figaro'

Connors' group is just one of several Air Force ensembles, which include a rock band, a jazz band, a brass ensemble and a trombone quartet. The group says that each ensemble caters its musical choices to the troops serving around the world.

"The rock band right now is working on some new songs that the kids are listening to," Bailes says. "What they do is they go through and they talk to young soldiers and they ask them, 'What do you want to listen to?' And then they find those tunes, and we actually arrange our own tunes within the squadrons."

After Sept. 11, 2001, the group added more patriotic songs to its repertoire. Bailes says she noticed how audiences changed after the attacks 10 years ago.

"All of a sudden, when we played patriotic music, people would start clapping and go crazy out in the crowd," she says. "And it just wasn't like that before. And I know for me personally, playing the "Armed Forces Medley" and "Stars and Stripes" almost every single night, you tend to go on autopilot. But I found myself, time and time again, getting more emotional, especially when I would look out into the audience and see a tear in a woman's eye. And then it would make me really appreciate what I'm doing. And I think it's affected a lot of us like that."

On Fresh Air, the Bay State Winds' members play several numbers from their repertoire, including John Philip Sousa's "Hands Across the Sea," Samuel A. Ward's "America the Beautiful" and "The Armed Forces Medley," arranged by Mark Craig. During concert performances, the band traditionally asks members of each armed-services branch to stand when their song is played during the medley.