Accessibility links
Remembering Priest: 'Bury His Heart, But Not His Love' The death of Father Mychal Judge, a chaplain to the Fire Department of New York, took on iconic status after a photographer captured an image of rescuers carrying the priest from the World Trade Center. Two men share their thoughts about that day: a cop who helped carry Judge and the priest's best friend. 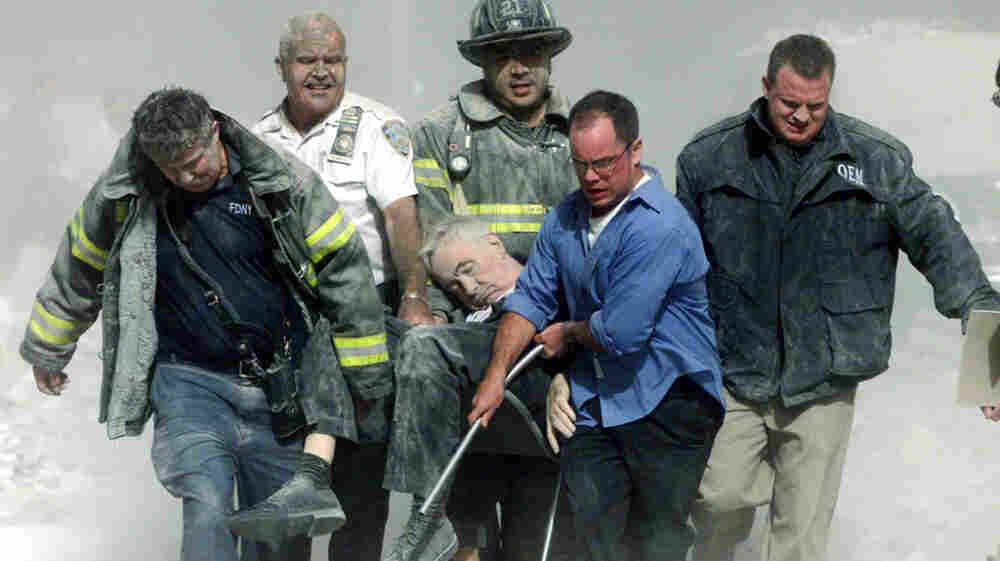 A mortally injured Father Mychal Judge is carried out of the World Trade Center by first responders, including Bill Cosgrove (in white shirt). Cosgrove says, "everybody you see in that picture was saved" from the North Tower's collapse, moments later. Shannon Stapleton/Reuters /Landov hide caption

Father Mychal Judge was a Franciscan friar and a chaplain to the New York City Fire Department. He was also a true New York character. Born in Brooklyn, Mychal Judge seemed to know everyone in the city, from the homeless to the mayor.

On the morning of Sept. 11, 2001, Father Mychal arrived at the World Trade Center shortly after the first plane hit. And as firefighters and other rescue personnel ran into the North Tower, he went with them.

Bill Cosgrove, a police lieutenant, was also there. When the South Tower collapsed, it sent debris flying into the neighboring building. When the dust cleared, Mychal Judge was dead. Soon after, Cosgrove found him. Then, Cosgrove and a group of firefighters emerged from the rubble, carrying Father Mychal's body.

Here's how Cosgrove, who's now retired, recalls that day:

I went a couple of steps, and I hit something. And I told the fire chief that somebody was on the floor. And he put the light on him — and I remember him saying, 'Oh my god, it's Father Mike.'

He checked his vital signs, and he said, 'He's dead.' So, we all picked him up. We went up the steps. And I remember looking up, because one of the firemen was yelling at a photographer. He was telling him, in no uncertain terms, 'Get out of the way.'

I didn't even think about that picture being taken. I was just doing my job. It's just... so many other heroic acts were being done all around me. It's just that no one took a picture of it.

The next day, when I came back into the precinct, somebody showed me the picture. And I got a lot of calls from people that knew Mychal Judge — firemen. They assumed I knew him, you know, but I didn't, until that day.

He's always been on my mind ever since then, because it's my firm belief that the only reason I'm here today is because of him. I know that sounds weird, but everybody you see in that picture was saved. And I'm sure had he not been there, I would have been trying to look for other people. And when that North Tower fell, I would have been right in the middle of it, just like the rest of the firemen were, and some of my cops. But nothing was going to happen that day. At least, not to me.

In the priesthood, Judge had been a mentor to another priest, Father Michael Duffy. The two served at the same parish in New Jersey during the 1970s. And at Judge's funeral service on Sept. 15, 2001, Duffy delivered the homily.

"We Franciscans are a little odd, and one of our oddities is, there's a form we fill out — it's called 'On My Death.' It says where you want your funeral mass to be, who you want to do the homily, and et cetera, like that," Duffy says. 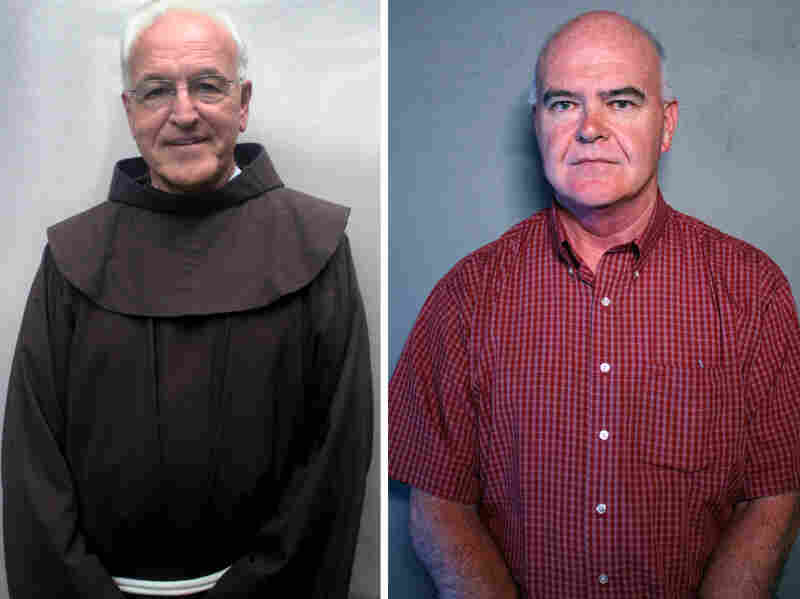 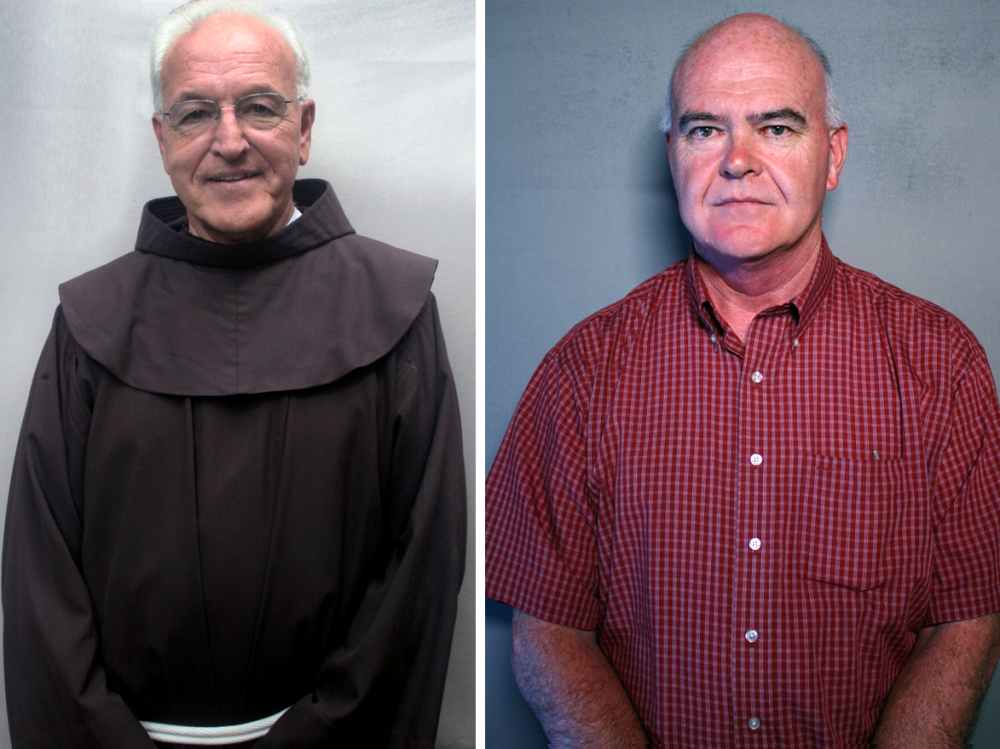 Saving Stories Of Loved Ones Lost On Sept. 11

As he recalls, Duffy didn't expect to be asked to speak about his late friend, especially on the occasion of a national tragedy.

But the day after the attacks, his provincial minister called him.

"So I mean, what are you going to say to that? I said to myself, 'When I see Mychal, I'm going to kill him,'" Duffy says with a laugh.

In his speech, Duffy made a joking comparison between Father Mychal and Sister Theresa. After all, the popular priest had touched many lives.

"Everyone thought Mychal Judge was their best friend," Duffy says. "He'd remember significant things in their life, and he would write a little note — just one or two lines. Of course, they'd write him back. So, he had a big black satchel, filled with letters to answer."

And many of those people came to pay their respects to Judge — far too many to fit in Manhattan's St. Francis of Assisi Church.

"There were 3,000 people at his funeral," Duffy says. "The church wasn't big enough to hold them. They were outside; Bill Clinton was there; Hillary Clinton; all New York."

The proceedings were also televised. And finally, it was Duffy's turn to speak.

"I stood up, and I reached in to get my glasses — and I couldn't get to the pocket, because my vestment was covering them. Thank goodness I'd practiced it, because I couldn't read it."

The full text of Duffy's homily is posted online. Following are excerpts of what Duffy told Judge's friends and family that day:

He loved to bless people — and I mean physically — even if they didn't ask. A little old lady would come up to him, and he would put his big thick Irish hands and press the head 'til I think the poor woman would be crushed.

He would say to me once and a while, 'Michael Duffy' — he always called me by my full name — 'Michael Duffy, you know what I need?'

And I would get excited, because it was hard to buy him a present or anything. I said, 'No, what?'

'You know what I really need?'

'Absolutely nothing. I don't need a thing in the world. I am the happiest man on the face of the earth. Why am I so blessed? I don't deserve it.'

Mychal Judge's body was the first one released from Ground Zero. His death certificate has the number '1' on the top. Of the thousands of people who perished in that terrible holocaust, why was Mychal Judge number one? And I think I know the reason. Mychal's goal and purpose in life was to bring the firemen to the point of death so they would be ready to meet their maker. Mychal Judge could not have ministered to them all. It was physically impossible — in this life.

In the next few weeks, we're going to have name after name of people who are being brought out of that rubble. And Mychal Judge is going to be on the other side of death — to greet them, instead of send them there.