Accessibility links
Geithner: 'Hundreds Of Thousands' Of Jobs Under Plan In a Morning Edition interview, the treasury secretary defended the president's jobs plan. Geithner says if passed, the plan "would have a substantial, powerful effect on strengthening the economy." He said that tax cuts aimed at small businesses who hire new workers would boost employment quickly. 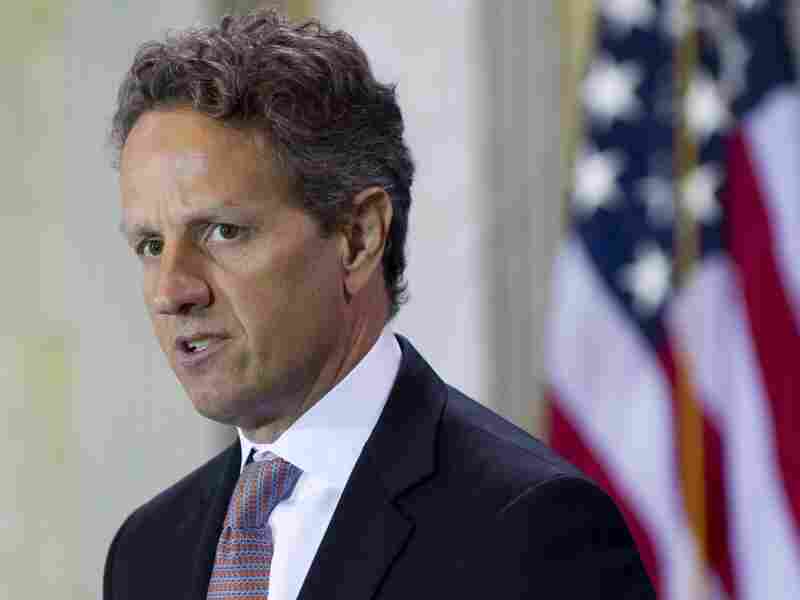 Treasury Tim Geithner said the president's proposal to spend on roads and other infrastructure would give a lift to the labor market over a longer stretch of time. Saul Loeb/AFP/Getty Images hide caption 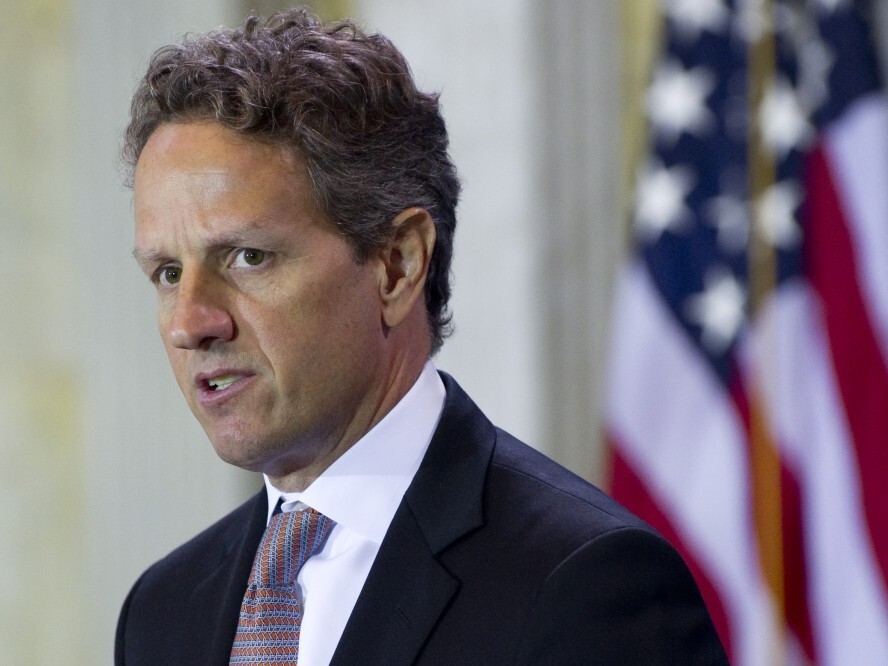 Treasury Tim Geithner said the president's proposal to spend on roads and other infrastructure would give a lift to the labor market over a longer stretch of time.

The $447 billion package of tax cuts, infrastructure spending and aid to states "is designed to make the economy stronger now and get more Americans back to work," Geithner told host Steve Inskeep.

Following is a transcript of the interview.

Steve Inskeep: Treasury Secretary Tim Geithner is on the line. He joins us from France where he is meeting today with European leaders on the global economy. Secretary Geithner welcome to the program.

Tim Geithner: Thanks for having me.

Inskeep: People have heard elsewhere in the program summaries of what the president is proposing — payroll tax cut extended for employees, payroll tax cut for employers, an infrastructure program, construction, job training, other tax provisions — coming up to around $450 billion. That's what the president proposed last night which Republicans said they could accept some of but they're doubtful it would really create very many jobs. So let me ask you, if Congress passed the whole plan today what is one part of this plan that would immediately not eventually create a lot of jobs, Mr. Secretary?

Geithner: Well the package as a whole is designed to make the economy stronger now and get more Americans back to work. And by putting more money back in the hands of working Americans, giving small businesses a pretty substantial tax cut to help get more people back to work, more money in the hands of state and local governments so they can re-hire teachers and first responders. Those things can work very, very quickly.

Also, out of investments proposed infrastructure, those things will also work quickly. But they'll also — they'll take time, a little more time, to get more traction. But that's a good thing because we've got a long term infrastructure problem and it's going to take a while to get Americans back to work. So it's a good thing some of these things take more time.

Inskeep: Well, let me ask about a couple of things you just mentioned. When you talk about the payroll tax cut for employers — this would actually lower the taxes that employers pay on the people they have on the payroll now. Corporations, though, are already sitting on a lot of cash. If you cut taxes for their current workers what would keep them from just pocketing the money or investing it overseas or something?

Geithner: Well, that's a very good point. But it's designed with just that reality in mind because the way this works is it goes primarily to small businesses that are under much more pressure. The benefits to large business a lot of the cash is much smaller. So it's much more focused on the parts of the economy where money today can make a real difference.

Inskeep: And you have head from business owners or business groups that if they get this tax cut they would actually hire a lot more people?

Geithner: Well, the main thing, as everybody knows, is businesses want to see more demand for their products. To make that possible you have to work on a number of different fronts as this plan does. But we think it would make a big difference to give small businesses a tax cut like this quickly. Again, it's a pretty meaningful additional amount of resources for them with incentives to use to put more people back to work.

Inskeep: I want to remind people, Mr. Secretary, that with the stimulus plan that the administration approved in 2009 there was a promise, a goal, that the stimulus would keep unemployment at no worse than 8 percent. Unemployment was rising up towards that number at the time.

Geithner: If I can just interrupt you. That's actually not quite true.

GEITHNER: It's a wide placed misperception. It was neither a promise nor a goal. What that did is, at that time in late 2008 when this was being put together, what the administration did is it laid out its normal forecast as they have to do. And their forecast at that time for the economy for unemployment was right in the middle of the consensus of forecasts of most business economists at that point. Now, as we know based on what's happened since, the economy was much worse than anybody knew at that time. The force of the crisis was much more dramatic. The drop in growth was much more serious. The loss of jobs was much greater than anybody expected. But the Recovery Act was exceptionally powerful in restarting economic growth much earlier than many of us thought.

Inskeep: Nevertheless if I may, that unemployment rate did rise above the 8 percent that was forecast.

Geithner: Of course it did, but...

Inskeep: People have noticed you haven't made a forecast for what this proposal would specifically do, which according to Democrats might be better politics. But does it point to the uncertainty in anything that you do? It's hard to know what the results really will be here?

Geithner: Well it's partly that. But I think, you know, we always have to provide, you know, OMB has to provide every, twice a year a rough outlook for the economy, and of course we continue to do that. In this case, we're going to let the private forecasters, and there are many, they all look at this independently, and they make their own judgment about how much it will do for growth, how much it will do for jobs, unemployment. What it does for the economy will depend on what Congress passes. But if Congress were to act on this bill, it would have a substantial, powerful effect on strengthening the economy that slowed quite a bit. And that would translate into jobs for hundreds of thousands of American workers at a time when we need that. You know, we're still healing from the worst financial crisis in generations. It was always going to take a long time to heal the damage caused by that crisis. We had a lot of shocks to the economy — high oil prices, Japan, Europe — over the course of the early part of this year, magnified by the damage to commerce caused by debt crisis, and we should be doing more as a country to make this economy strong in the short term. And in our judgment, this is the best set of measures available to do that. There may be other ideas out there, and we're open to that too, but this would be a very powerful package.

Inskeep: We're talking with Treasury Secretary Timothy Geithner, and of course elsewhere in the program we've been hearing Republican responses. We'll hear many more in the days to come, the weeks, perhaps the months to come. And one thing Sec. Geithner that we've heard is Republican doubts about whether the roughly $450 billion a year is paid for. Of course you budget over a decade. The president is saying let's spend more now and we'll save more later in the decade. Congressman Allen West of Florida, a Republican, seems a little doubtful of that, let's listen.

Allen West (TAPE): He wants us to find additional cuts in spending over the next 10 years. That's kind of like in Popeye when Wimpy would say I will gladly pay you next Tuesday for a hamburger today.

Inskeep: Alan West of Florida. Is there some truth to the argument that when you promise spending now and savings later, historically the savings often don't materialize?

Geithner: I don't — I understand why people have that concern, and it's up to Congress to address that concern. And that's why what the president proposed is that these growth measures, the American Jobs Act, would be combined with legislation which would force Congress to lock in savings over the 10 year period.

Inskeep: But it's hard to lock them in, isn't it?

Geithner: No, actually, one of the great strengths of our system is, for large parts of government spending, Congress has the ability to make changes today, and hold to those over time. Some parts of the budget, like defense and what people call non-defense discretionary spending, Congress revisits every year. But for large parts of spending, Congress can make changes today, and they will hold to those changes over time. But again, that's up to Congress. What, the right thing to do, though, is to make sure this package of job-creating ideas is combined with credible measures that lock in long-term savings. Now, you're right that Congress can always revisit those, and you want to build in some protections against that risk. But this is the right way to do it now, which is to do long-term savings that create room for doing things that help the economy.

Inskeep: Secretary Geithner, just got a moment left here. Want to ask about another thing the president raised. Of course for a lot of people housing is still at the heart of this crisis, and millions of people are still underwater on their mortgages, struggling to pay their mortgages. And the president spoke of working with federal housing agencies to help people refinance their existing loans at a lower interest rate. Do you need an act of Congress in order to make that happen?

Inskeep: But it hasn't happened yet.

Geithner: No, but they're actively looking at this now. There's been quite a lot of refinancing, but not as much as you would expect given how low rates are. And so one of the things the president has proposed to do is to encourage them to take that action. And I expect you're going to hear form us more in the next three weeks or so about the details of how we can make that happen.

Inskeep: Secretary Geithner, thanks very much for joining us this morning, appreciate it.

Geithner: Happy to do it.

Inskeep: Timothy Geithner is the U.S. treasury secretary, speaking with us from Europe, where he is holding economic meetings today. And of course we are reaching out to Republicans and will be hearing from quite a few more from them in the days and weeks ahead.