Accessibility links
'Heart Of A Soldier': An Opera At The Heart Of Sept. 11 A new opera tells the story of Rick Rescorla, head of security for Morgan Stanley, who helped thousands escape the south tower but lost his own life. The opera premieres Saturday night in San Francisco. 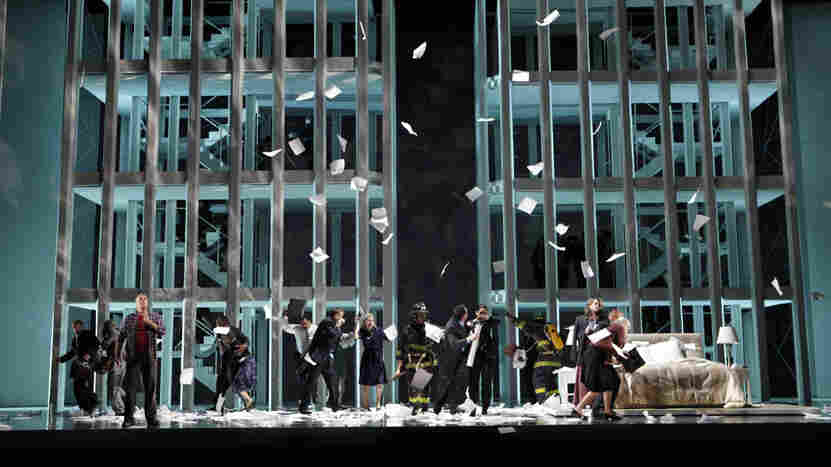 A shot from the dress rehearsal of Heart of a Soldier, which opens Saturday in San Francisco. Corey Weaver hide caption 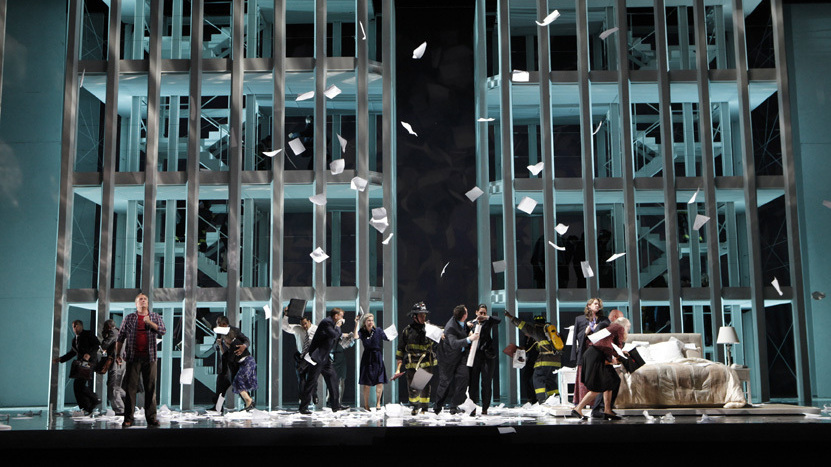 A shot from the dress rehearsal of Heart of a Soldier, which opens Saturday in San Francisco.

A man saves thousands from a burning building, then goes back in to make sure he got everyone out. He dies, leaving behind the great love of his life.

It might sound too dramatic to be true, but it happened 10 years ago Sunday at the World Trade Center in New York. Journalist James Stewart's book about that man, Heart of a Soldier, is the subject of a new opera, premiering Saturday in San Francisco.

After the twin towers fell, Stewart was reporting about Wall Street for The New Yorker when he learned that Morgan Stanley, one of the firms with offices in the towers, had almost no casualties.

"That just kind of lodged in my mind as an oddity," Stewart says, "because so many other firms were either completely wiped out, nearly wiped out, horrible losses."

Stewart started asking around to find out why Morgan Stanley had been an exception.

"Someone finally said, 'I think it was because there was this one guy who was in charge of security there who defied the order to stay in the tower and got everyone out,'" he says.

Sept. 11 On The Opera Stage: Christopher Theofanidis' 'Heart Of A Soldier'

That guy was Rick Rescorla, a Vietnam veteran with a long history of heroic deeds.

The deeper Stewart dug, the more incredible and sad Rescorla's story became. After a failed marriage, Rescorla had found the love of his life, Susan Greer, who was also in her 50s and divorced when they met.

"We could be in the car holding hands. It would be the most wonderful thing in the world," Greer-Rescorla says. "It was the most happiest wonderful time. I don't know, it was — it was just amazing to have someone who you're both just so in love with each other. I felt like I had a new chance in life."

Love and duty would eventually face off when terrorists flew two planes into the World Trade Center. As head of security at Morgan Stanley, Rescorla evacuated some 2,700 employees from the south tower and then went back up to make sure no one was left behind.

"Rick had decided that there was something more important in life than even those great loves of his life," says Stewart. "And that was to save others that were in his care."

Opera director Francesca Zambello was struggling with how to confront the tragedies of Sept. 11 as an artist when she picked up Stewart's book.

"And I was immediately taken by the story — that it had all the elements that one thinks of when you think of in quotes, grand opera," she says. "It had huge themes of passion and bravery and courage and also at the core of it, something that you can't have any theater piece without, which is love stories."

The opera, named after the book, begins with Rescorla's childhood in Britain, where he befriended American soldiers on their way to Normandy during World War II. Composer Christopher Theofanidis says Rescorla struggled with seeing his new friends go off to war.

"Rick, as a little boy, learns his first lesson in soldiering which is training your heart to let go when you have to," Theofanidis says. "That's a part of being a soldier — and having the strength to get through that. And he says to the American GIs — he teaches them this song: 'Train your heart to not give out, though what's to come it cannot know.'"

As an adult, Rescorla served on the British colonial police force in Rhodesia. His character, played by Thomas Hampson, sings the same song. When the real Rescorla learned of the Vietnam War, he volunteered for service in the U.S. Army. The opera shows him as a caring platoon leader in the heat of battle as his men struggle under pressure.

Theofanidis says Rescorla also had a habit of teaching his troops to sing in battle. "One of the things I think he understood really strongly was that music and song unite people in a really strong way," he says. "He had taught his charges to sing to overcome their fear, their own sense of disorder."

Rescorla did the same thing with the employees of Morgan Stanley who were in his charge. When he trained them how to evacuate he told them to sing. And in the opera, when he helps them out of the burning tower, he has them sing the song he taught American GIs as a boy: 'Train your heart to not give out, though what's to come it cannot know.'

Rescorla's sacrifice is not the only tragedy in this story or this opera. Director Zambello says the struggle between duty and love is the theme of many great dramas, and she was drawn to the way Greer-Rescorla had come to understand her husband — and train her heart.

"Her journey was to me what was interesting dramatically — to see that she comes to understand that," Zambello says. "And now I get it. I mean I get why he did it and why that heart of a soldier is different from us. I'm a mortal. He wasn't."