Accessibility links
How A Very Clever Virus Kills A Very Hungry Caterpillar Scientists have found the gene that drives a virus to kill gypsy moth caterpillars in a particularly gruesome way. The virus forces the caterpillars up to the tops of trees, where they melt and rain down virus onto the leaves below. 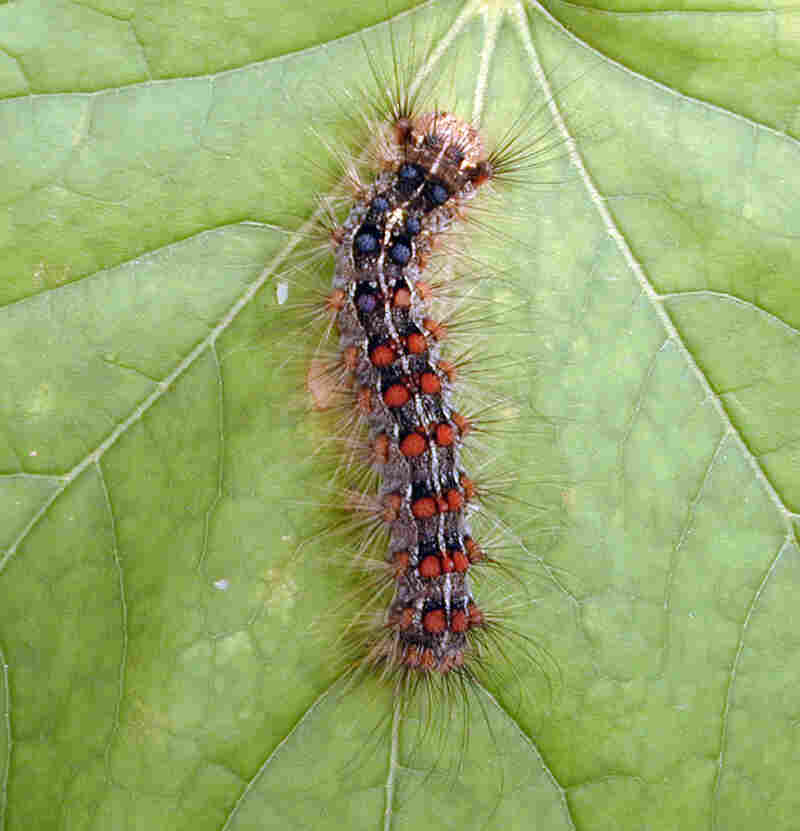 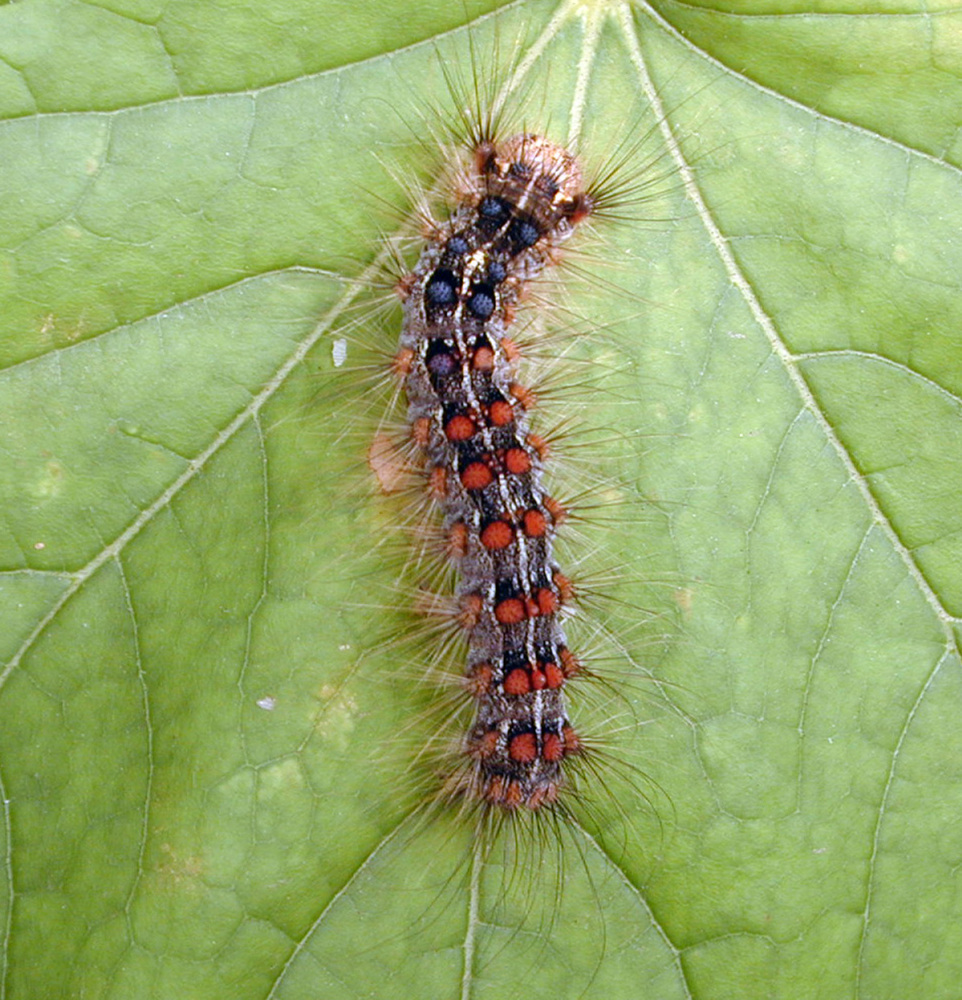 A healthy gypsy moth caterpillar on a leaf. Outbreaks of gypsy moths damage roughly 1 million acres of forest in the U.S. each year.

Scientists say they have figured out how a very clever virus outwits a very hungry caterpillar.

The caterpillar is the gypsy moth in its larval stage, and the invasive species damages roughly a million acres of forest in the U.S. each year by devouring tree leaves.

But the damage would be greater if it weren't for something called a baculovirus that can infect these caterpillars and cause them to engage in reckless, even suicidal behavior, scientists say. The virus is so effective that the government actually sprays it on trees to help control gypsy moth outbreaks.

Now, a team of scientists thinks it has discovered how the baculovirus takes control of gypsy moth caterpillars. The key is a special gene that's carried by the virus and affects the caterpillar's eating behavior, according to the team's new study in Science.

The discovery explains a phenomenon scientists have wondered about for decades.

Normally, gypsy moth caterpillars feed on tree leaves at night when predators including birds and squirrels can't see them. Then during the day, the caterpillars climb down and hide in the tree bark or even under leaves on the ground.

But caterpillars abandon that sensible strategy when they're infected with a baculovirus, says Kelli Hoover, an entomologist at Pennsylvania State University and the paper's lead author.

"As they get sick, they climb up to elevated positions and stay there and die," she says. What happens next is pretty gruesome. "The inside of the caterpillar gets pretty much converted to millions and millions of virus particles. Then there are other enzymes that cause the exoskeleton to melt. And that liquefies the caterpillar, and then it can rain virus down on the leaves below."

When other caterpillars eat those leaves, they get infected, too.

Hoover and a team of researchers suspected that the virus was taking control of the caterpillar by using a gene involved in molting, which the gypsy moth larvae must do several times as they grow. The gene also affects eating behavior because in order to molt, larvae must stop eating.

"Every time the caterpillars were infected with the normal gene, they would die at an elevated position in the container," Hoover says. "If the gene was knocked out, they didn't." 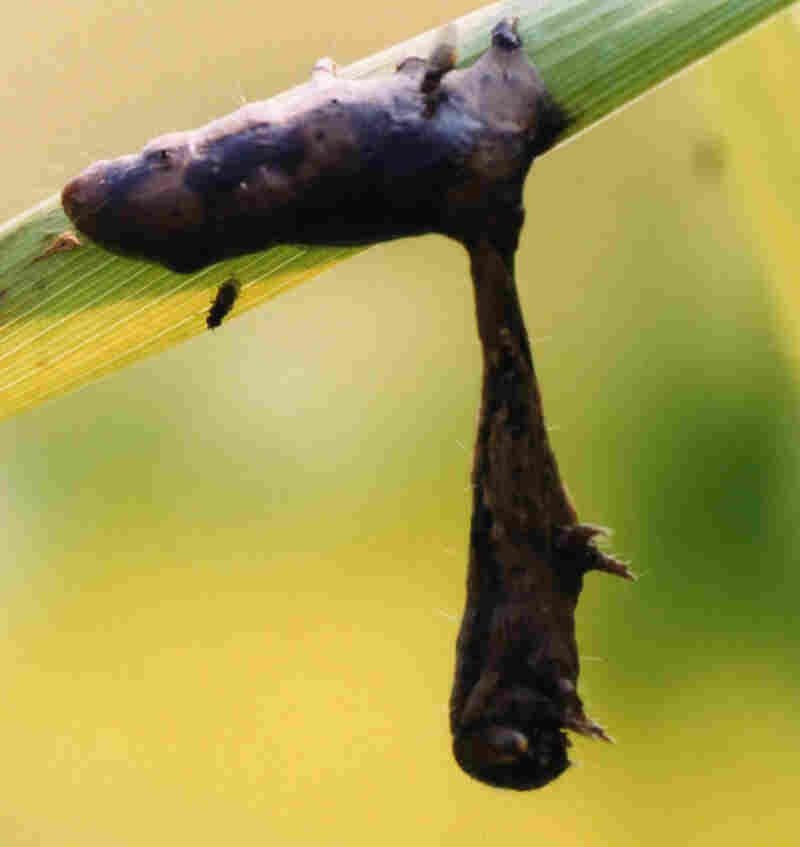 Caterpillars infected with baculovirus climb to the tops of trees, where they melt and drip the virus onto the foliage below. There, it's eaten by other caterpillars. Michael Grove/Science/AAAS hide caption 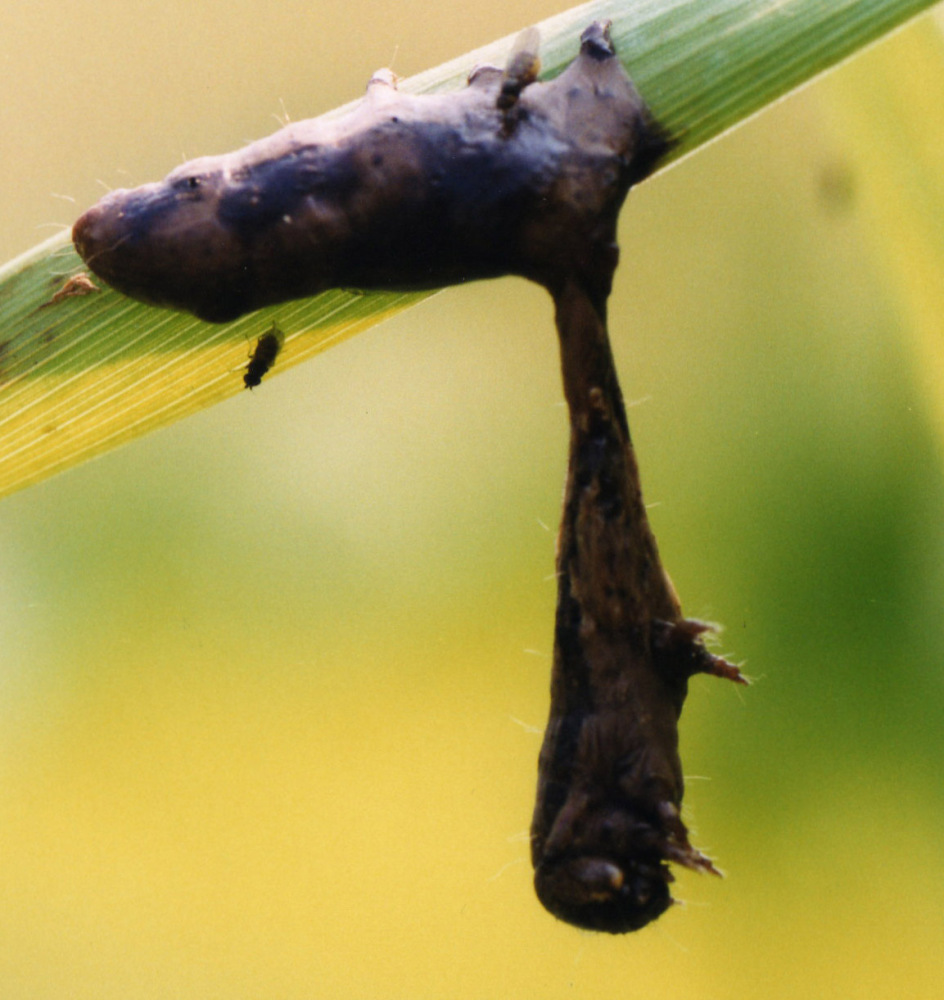 Caterpillars infected with baculovirus climb to the tops of trees, where they melt and drip the virus onto the foliage below. There, it's eaten by other caterpillars.

That's probably because this gene disrupts a hormonal system that tells the caterpillar when to stop eating," says Hoover. "And to feed, you need to be up in the tree."

The result is devastating for the gypsy moth but great for the virus, says David Hughes, an entomologist and biologist at Penn State and a co-author of the study. So if you look at the world from the point of view of a baculovirus, it's easy to see how it would have evolved to carry this gene.

"The most important challenge for a virus is outcompeting other viruses," Hughes says. So a virus that could make its host die in a place that spread the infection to other hosts would have a big advantage, he says.

Other scientists say the finding reveals just how clever a pathogen can be.

"Who knew that a virus would be able to manipulate the behavior of its host?" says Jim Slavicek, a research biologist with the U.S. Forest Service, who also contributed to the new study.

Virus As A Weapon Against Outbreaks

Slavicek says knowing precisely how baculovirus overwhelms the gypsy moth could help scientists develop more potent strains of the virus. It could also help them determine when in the gypsy moth's life cycle it is most vulnerable to infection.

And he says all that could help bring down the cost of spraying with baculovirus. Right now, he says, land managers often use cheaper methods, such as insecticides or a deadly fungus.

"The advantage of the virus is that it is specific for gypsy moth larvae, and so it will impact no other animal, insect, plant in the treatment zone."

Gypsy moth outbreaks in the U.S. are less severe than they were a couple of decades ago, thanks to better treatments, Slavicek says. But he says the pest remains a major threat that can leave a forest bare in a matter of weeks.

During an outbreak, Slavicek says, there are so many caterpillars that their remains make some roads so slippery that road crews have to apply sand.

And if you drive on those roads at night, he says, "millions of moths will fly to the car, and it can be so dense that it's like a snowstorm. You can't see what's in front of you."