Accessibility links
Dignity Therapy: For The Dying, A Chance To Rewrite Life In his work with the dying, a psychiatrist asks patients to write a formal narrative of their life — a document they can pass on to whomever they choose. He's noticed that the stories people tell about themselves as they face death are often very different than the stories they tell at other points. 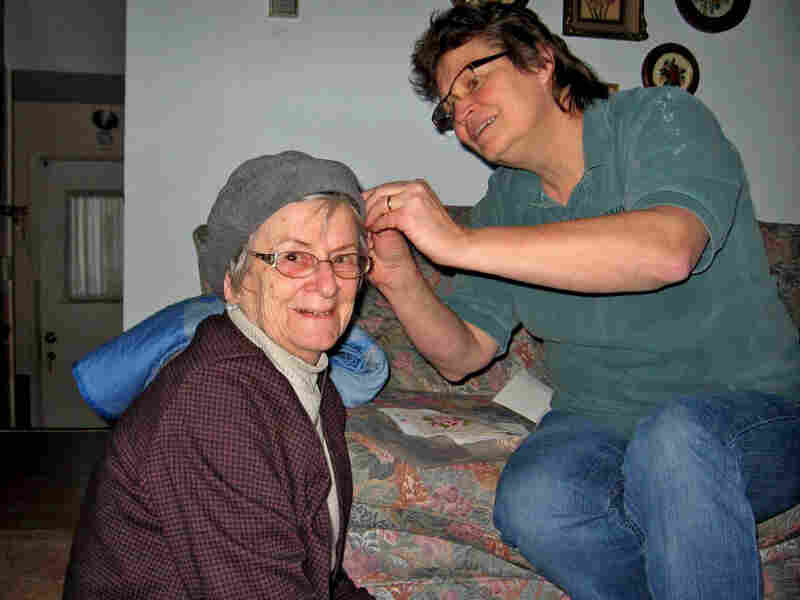 Kate Frego pins the turban of her mother, Aida Essenburg. Before Essenburg died in July of this year, she sat down with a dignity therapist to record the history of her life in what became a 50-page document. Courtesy of Kate Frego hide caption 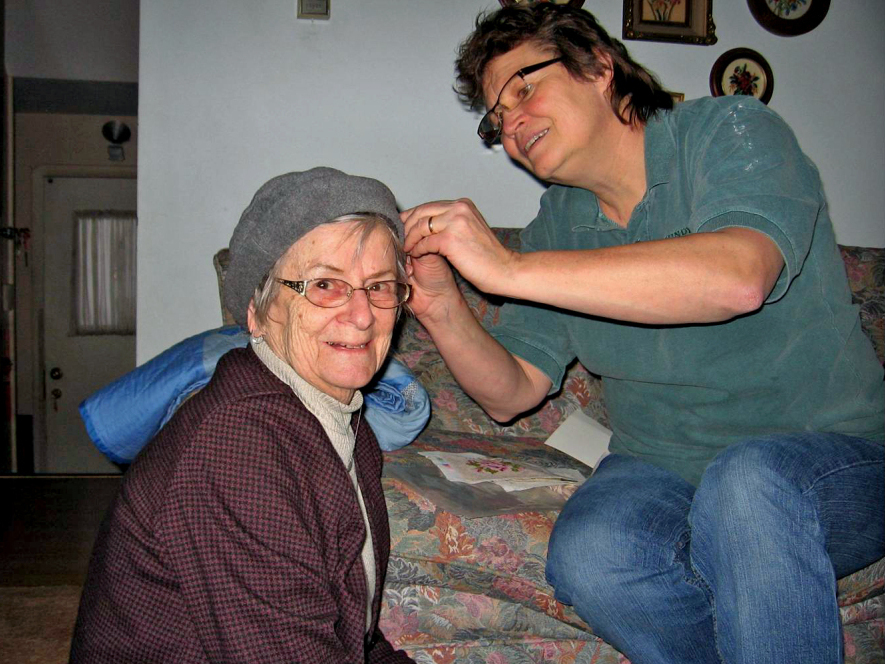 Kate Frego pins the turban of her mother, Aida Essenburg. Before Essenburg died in July of this year, she sat down with a dignity therapist to record the history of her life in what became a 50-page document.

For several decades, psychiatrists who work with the dying have been trying to come up with new psychotherapies that can help people cope with the reality of their death. One of these therapies asks the dying to tell the story of their life.

This end-of-life treatment, called dignity therapy, was created by a man named Harvey Chochinov. When Chochinov was a young psychiatrist working with the dying, he had a powerful experience with one of the patients he was trying to counsel — a man with an inoperable brain tumor.

"One of the last times that I went into his room to meet with him, on his bedside table was a photograph of him when he had indeed been young and healthy and a bodybuilder, and it was this incredible juxtaposition of these two images," says Chochinov.

So in the bed there's his patient — this skeleton of a man — very pale and weak. On the bedside table, there's this portrait of a glistening, muscled giant. And Chochinov says that sitting there, it was very clear to him that by placing this photograph in such a prominent position, the man was sending a message: This was how he needed to be seen.

As Chochinov continued his work with the dying, he confronted this again and again — this need people have to assert themselves in the face of death. And he started to wonder about it.

"Why is it that how people perceive themselves to be seen should have such a profound influence? How does that make sense? What does that mean?" Chochinov says.

So he tried to answer those questions. As a psychiatrist at the University of Manitoba in Canada, he did study after study trying to tease out exactly what troubled people most about dying. What he found was that what people found most assaulting and annihilating was this idea that who they were would completely cease to exist after their death. And so Chochinov decided to do something about it.

The something that Chochinov decided to create was a formal written narrative of the patient's life — a document that could be passed on to whomever they chose. The patients would be asked a series of questions about their life history, and the parts they remember most or think are most important. Their answers would be transcribed and presented to them for editing until, after going back and forth with the therapist, a polished document resulted that could be passed on to the people that they loved.

When you are standing at death's door and you have a chance to say something to someone, I absolutely think that that proximity to death is going to influence the words that come out of your mouth.

Harvey Chochinov, a psychiatrist at the University of Manitoba in Canada

"When you are standing at death's door and you have a chance to say something to someone, I absolutely think that that proximity to death is going to influence the words that come out of your mouth," Chochinov says.

Some people at that point choose to reinterpret lives, while other choose to frame their life as a warning. For example, Chochinov says he was doing the therapy with an alcoholic who had lived a very troubled life. Chochinov wants his therapy to help people come to peace with their lives, and he was trying to get the man to remember some good times. But the man was having none of it.

"I remember him saying, 'I don't want to talk about Christmas — I don't remember many very happy Christmases, and that's not why I'm doing this,' " says Chochinov.

Chochinov says people who are troubled sometimes use the narratives to formally ask their families for forgiveness. But this guy wasn't even doing that.

"He was way past being forgiven," says Chochinov. "He simply wanted his grandchildren to know who their grandfather was so they could choose a better way."

But do these stories have to be true in order to be therapeutic? To find out more, I got in touch with Kate Frego, whose mother, Aida Essenburg, passed away on July 1. Before she died, she sat down with a dignity therapist to record the history of her life. It became a 50-page document.

In one section, she writes: "It was on the other side of the river, on the Fort Gary side, that's where I met my husband. We'd go there and sit around or go paddling ... now we'd say we 'hung out.' He was a very nice person. I don't think he ever swore in his whole life."

Frego says that after her mother's death, she and her sister rushed to the hospital to retrieve this document — they were just so curious. Sitting on the floor in her mother's empty living room, Frego says she started to read.

"Mom had spoken about this document we would see after her death several times, in slightly mysterious terms," says Frego. "And she always kind of laughed about that, as it if were a bit of a joke she was playing on us."

But one of the first things Frego realized was that there would be no earth-shattering headlines or dark revelations. Instead, she found the opposite: Often in the story, Frego says her mother "just dramatically underplays something that I know was actually much larger and much more meaningful or painful or upsetting to her."

Consider, for example, her mother's recounting of a visit she made to her sister who lived in a different town. She wrote: "She was quite well, we had a lot of fun and a wonderful visit."

The prevailing mythology is that you die the way you live and you can't change yourself in any way. The fact is that the last few months of life — because of the awareness of death — create an urgency that facilitates growth and change.

But it happens that Frego was on that visit, so she knows that it was not really wonderful. Her mother's sister was very sick and so disoriented that Frego and her mother spent most of their time essentially trying to put out fires.

She says they found out "some really unfortunate things about family members that were taking advantage of my aunt. We had to correct those things, and we had to deal with her and her bank accounts, and get her to eat again."

Was Frego's mother's version a deliberate distortion of the truth, brought on because she was facing death? A whitewashing or attempt to bend the narrative of her life in a more positive direction? Frego doesn't think so. She believes that the fact that her mother was so close to death just changed her interpretation of things.

"It wasn't an intentional blurring; it really was her giving us her take on things and where she was at the time," says Frego. "She was telling us that she chose to remember the happy parts of it. And truth is the way we perceive what's happening to us, how we interpret it."

An Urgency To Change

So it wasn't a lie — it was a genuine re-evaluation, which apparently is pretty common.

"When you face death, it's like facing a wall, and it forces you to turn around and look at the life that you've lived," says William Breitbart, a psychiatrist at Sloan-Kettering Cancer Center in New York. He's been trying to develop new psychotherapies for the dying. He says that many people have the wrong idea about the dying process.

"The prevailing mythology is that you die the way you live, and you can't change yourself in any way," says Breitbart. "The fact is that the last few months of life — because of the awareness of death — create an urgency that facilitates growth and change."

'The Long Goodbye': A Syllabus For Modern Mourning

This, he says, is why something like dignity therapy can be good. Though there's no evidence that it relieves depression or anxiety, he thinks it can help us change in the very last moment of our lives. After all, he says, we've all lived imperfect lives.

"All of us fail, and the process, the task of dying, is to relieve ourselves of this guilt, whether it's forgiving yourself or asking others to forgive you," says Breitbart. "Or to remember your life slightly differently. But that's the task of dying."

As for Frego, she says she's developed a strange relationship to the document her mother put together. Since her mother's death, Frego says she's actually carried the document around with her. She has the story of her mother's life, always at her side, knocking around in the bottom of her bag.

A previous version of this story misspelled Harvey Chochinov's surname.