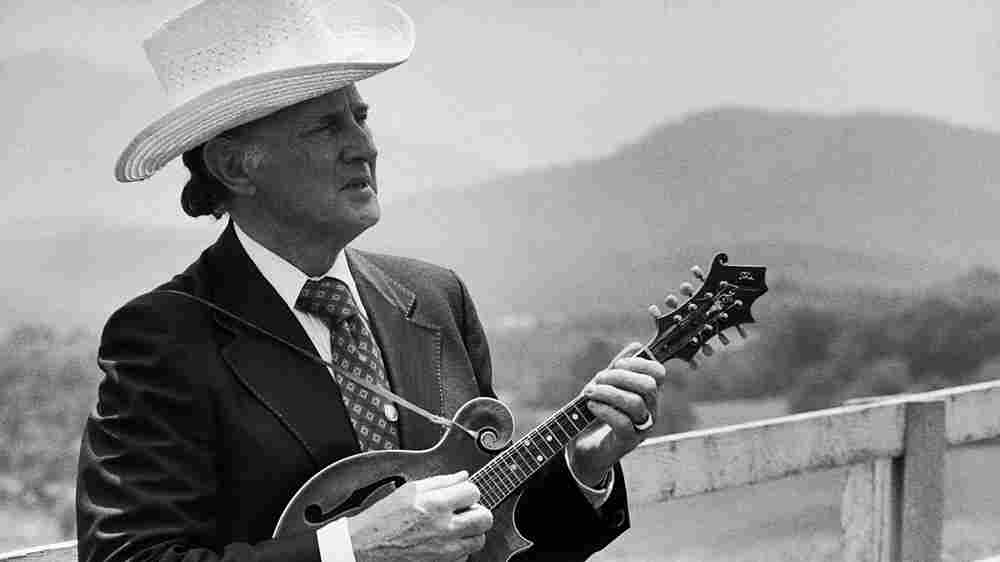 Bill Monroe, known as the "Father of Bluegrass Music," was born 100 years ago this week in rural Kentucky. He influenced early country music and rock 'n' roll, as well as the hard-driving, high-lonesome genre he created — bluegrass.

William Smith Monroe was a man of few words, but he opened up to fellow bluegrass musician Alice Gerrard, who recorded him in 1969.

Chris Thile, Sam Bush And Others On The Influence Of Bill Monroe

Gerrard says it was hard to get Monroe to open up.

Monroe grew up as the youngest of eight children on a working farm. His biographer, Richard D. Smith, says Monroe was born with a condition that left one eye crossed and his vision severely impaired. He was teased for that.

"Being the youngest, being kind of shunted off to the side, being teased — bluegrass is often known as the high lonesome sound," Smith says. "This childhood pain came out in his music, and he really worked through it with his music.

"Bill Monroe was just 10 years old when his mother died," Smith adds. "And in this wonderful autobiographical song, 'Memories of Mother and Dad,' the song begins, 'Mother left this world of sorrow, our home was silent and so sad ...' "

Del McCoury sang lead and played guitar with Bill Monroe in the mid-1960s. He recalls that at first he couldn't get the lyrics right, so Monroe took him to his parents' graves when the band was passing through Kentucky.

"So we stopped in at Rosine, and he took me there to those tombstones, and he said, 'Now I want you to read what's on those tombstones there,' " McCoury says. "And so I read it — on Mother's, 'Gone, but not forgotten.' And on Dad's, 'We'll meet again someday.' That's what it said. A lot of his songs were true life. ... And they meant a lot to him."

Smith says that Monroe is one of the great early autobiographical singer-songwriters.

"I mean, he was writing autobiographical material before Hank Williams," Smith says. "I'm not saying he's the first to do it, but so much of that stuff is from his life experience. I mean, he just is absolutely baring his soul."

His father died when Monroe was still a teenager, and he went to live with his mother's brother, his Uncle Pen Vandiver. He's the subject of "Uncle Pen," one of what Monroe called his "true songs."

Uncle Pen was an old-time fiddle player, and they were able to bring in much-needed money by playing at local dances. The young Monroe also worked with a black musician, Arnold Shultz, in a rare integrated duo, playing segregated dances in the 1920s.

"I tell you, me and him played for a dance one night," Monroe said. "We started, you know, at sundown, and the next morning at daylight, we was still playing music. All night long. 'Course that automatically meant you'd be dancing on Sunday. But that is really the truth."

Monroe continued absorbing black and white musical traditions throughout the 1930s, closing in on the style that would become bluegrass. He first went on the road as a duo with his brother Charlie, then led his own band, named after his home state of Kentucky.

"I think Bill Monroe is arguably the most broadly influential figure in American popular music," says Smith. "Not only he's the father of bluegrass — he was influential in country music, later in the folk music revival, but also ... early rockers loved Monroe — Elvis [Presley], Carl [Perkins], Buddy Holly — all huge Bill Monroe fans. Maybe he doesn't have the specific impact of a Louis Armstrong ... [or a] Frank Sinatra, but over a spectrum of American music, this man was quite influential."

Smith says that influence pervades American music to this day. Chris Thile, best known for his work in the bands Nickel Creek and Punch Brothers, plays mandolin. He says he remembers meeting Monroe for the first time in 1992. Thile was a child prodigy playing a tune for the old master, and "Big Mon" (as Monroe was known) smiled and gave him a quarter.

"That was something he always did," says Thile. "If he ever encountered a little kid and had the opportunity, he gave them a quarter. And so after I played for him, he gave me a quarter, which was awesome — a pretty epic experience for an 11-year-old."

Monroe, who died in 1996, gave out hundreds, probably thousands of quarters over his long life. It's as if this famous musician, who had played for four sitting U.S. presidents and won the nation's highest honor in the arts, never forgot being that cross-eyed boy, growing up poor on a Kentucky farm.