Accessibility links
Arab Spring Blooms On Libyan Radio In Libya, the airwaves have been liberated from years of control by the regime of dictator Moammar Gadhafi. Now, Libyans can hear foreign radio broadcasts, express themselves freely on call-in shows and listen to music with messages that would have once gotten them thrown into prison. 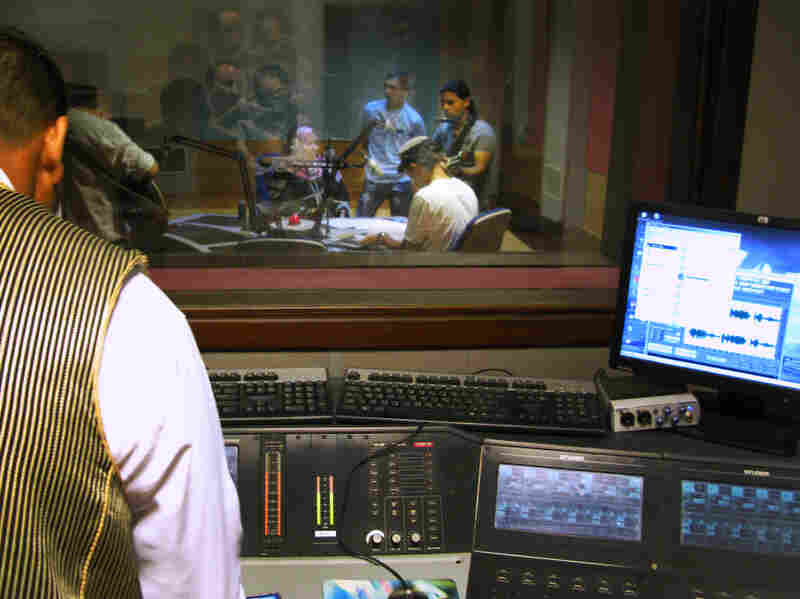 Musicians and other Libyans who once dared not express themselves are finding a new outlet on the country's newly freed radio stations. Shown here, a recent day at the studios of Radio Libya — once a state-run station — in Tripoli. Jason Beaubien/NPR hide caption 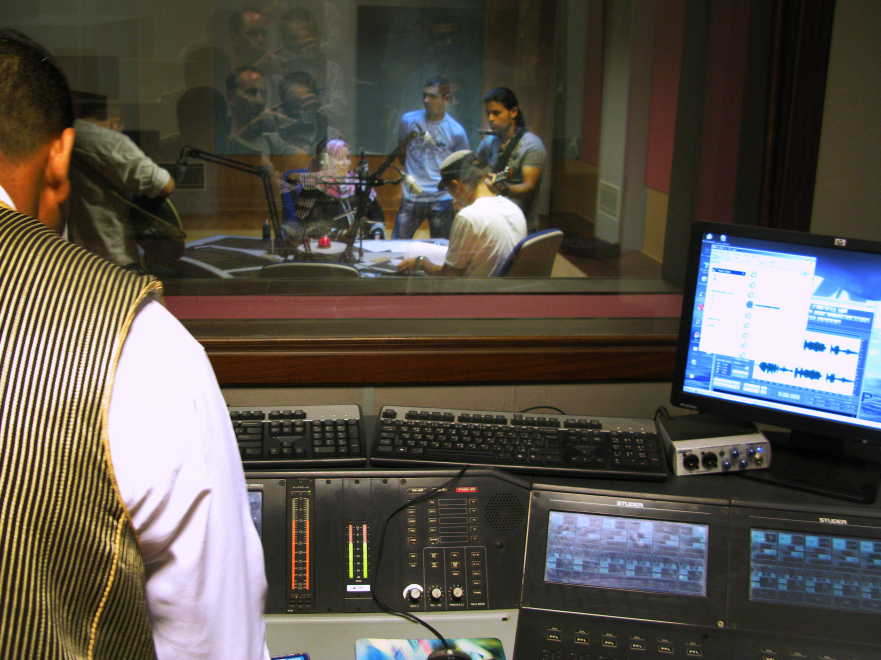 Musicians and other Libyans who once dared not express themselves are finding a new outlet on the country's newly freed radio stations. Shown here, a recent day at the studios of Radio Libya — once a state-run station — in Tripoli.

The fall of Libyan dictator Moammar Gadhafi has brought about a dramatic change on the radio dial in Tripoli, the Libyan capital.

In the past, Libyans could only tune in to the government stations. Foreign broadcast signals were blocked. And what the state-run stations offered was tightly controlled and laden with pro-Gadhafi propaganda.

Now, the airwaves that used to only carry four state-run stations — broadcasting only in Libyan Arabic as a mouthpiece for the Gadhafi regime — are filled with broadcasts from across the Mediterranean and neighboring Tunisia.

There's news from Radio France International. Announcers yell in Italian. A station in Tunisian Arabic can be heard. Shakira is singing in Spanish and English.

In the past, the government jammed all these broadcasts.

Rebels have taken over the main national radio station, which used to be called Al-Libiyah, and renamed it Radio Libya.

Ahmed Mustafa Sharif spent his career working as a logistics manager for a European oil company. After the rebels seized Tripoli three weeks ago, the 46-year-old became the assistant manager of Radio Libya.

We were waiting for this moment, where we could actually speak to the world and tell them how we feel.

Fuad Ramadan, a Libyan musician who had to meet secretly with friends to practice English and write music

On a recent day, he walks through the main studio, which is hosting a call-in show. Much of the talk is upbeat about the ouster of Gadhafi, but some people also call in to complain about the lack of water and other supplies in the capital.

But even complaining is something new. Sharif says people didn't call in to complain or criticize under the old regime.

Down the hall, four young musicians from Tripoli are being interviewed. It's the first time they've ever been invited to perform on the radio.

In the control room for the broadcast studio, tears well up in Sharif's eyes as he listens to the young men singing in Arabic, English and French.

"I'm going to be cry, you know. This is first time we feel the free in Libya," he says.

"You cannot move free. You cannot say anything on the radio. Now they are working free. We can put English singers, Arab singers, any singers ... in the radio, but before no," Sharif says. "Also, [Gadhafi] didn't like anybody to be star. Just for him — this country just for him."

Fuad Ramadan, who was playing guitar in the studio, says that until three weeks ago, he could have been arrested for performing most of his songs in public. He says he used to get together secretly with a group of friends to practice English and write music.

"We used to go and gather at Hamed's place," he says. "We used to go there without telling anybody, of course. Anybody could tell on you, and you could go beyond the sun. So, we used to gather, we used to make songs, we used to write together. And we were waiting for this moment, where we could actually speak to the world and tell them how we feel."