Accessibility links
Japanese Seniors: Send Us To Damaged Nuclear Plant Since Japan's nuclear accident in March, about 500 Japanese seniors have signed up to work at the dangerous plant. They say it's better that they risk their lives than the younger workers at a job that has been called courageous — and suicidal. 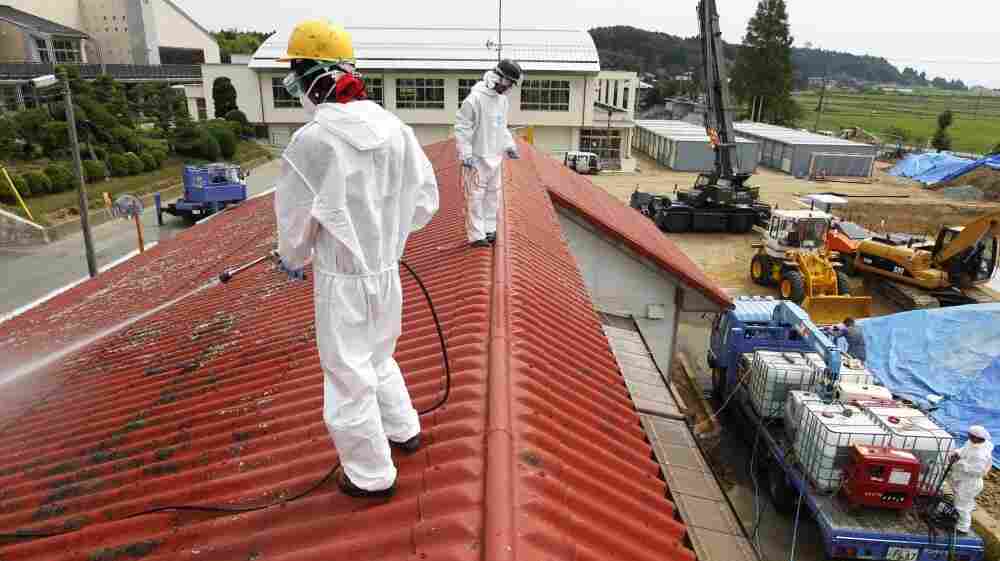 Workers decontaminate the roof of a kindergarten about 12 miles from the crippled Fukushima nuclear plant in Japan last month. Several hundred Japanese seniors have volunteered to take part in the cleanup effort. Hiro Komae/AP hide caption

They are all retirees, and they have all volunteered for a single, dangerous mission: to replace younger workers at the badly damaged Fukushima nuclear plant.

The Skilled Veterans Corps for Fukushima consists of more than 500 seniors who have signed up for a job that has been called courageous — and suicidal.

Kazuko Sasaki, a 72-year-old grandmother, is one of those ready to serve.

"My generation built these nuclear plants. So we have to take responsibility for them. We can't dump this on the next generation," she says.

The founder of Skilled Veterans is Yasuteru Yamada, a slight, soft-spoken man of 72.

An engineer who has spent his life around industrial plants, Yamada says he and his retired colleagues quickly realized after the March 11 disaster that conditions at Fukushima were far bleaker than the government was letting on.

My generation built these nuclear plants. So we have to take responsibility for them. We can't dump this on the next generation.

Kazuko Sasaki, a 72-year-old grandmother who has volunteered to help clean up the Fukashima nuclear plant

His decision to gather senior volunteers, he says, was based neither on courage nor altruism, but on a brutally realistic calculus. It would be better to send men and women who have finished raising families and are in the sunset of their lives, rather than younger workers whose lives could be cut short by extreme radiation exposure.

"We won't completely replace younger workers," Yamada says. "But for work that doesn't require brute strength, we can fill in, where the radiation is especially high."

Yamada's gray volunteers have received admiring coverage from around the world, and yet they have been all but ignored by the Japanese media, which doesn't seem to take them seriously.

The seniors are undeterred. They include former nuclear workers, forklift operators, translators and even a folk singer. They have pooled their skills and become proficient at social media, attracting volunteers into their 90s, and have raised more than $100,000 in donations.

The Japanese government and Tokyo Electric Power, which owns the plant, are still weighing the offer.

After weeks of getting the cold shoulder, the seniors were finally allowed to visit the accident site in August. They have submitted a proposal to send in teams of seniors for light work in dangerous hot spots, such as monitoring radiation levels.

Yamada, 72, is a lymphoma survivor, and he says that near-death experience has shaped his desire to serve at Fukushima.

"I want to make the most of the time I have left," he says.

Yamada says, however, that he's in no hurry. With the cleanup of the Fukushima plant likely to take decades, there's plenty of time, he says, for the government to come around.