Accessibility links
Agency Takes New Approach To Save Everglades Land In Florida, federal officials have released plans for a new wildlife preserve just south of Orlando. The Everglades Headwaters National Wildlife Refuge will include at least 150,000 acres, but there's a twist — most of it will remain under private ownership. 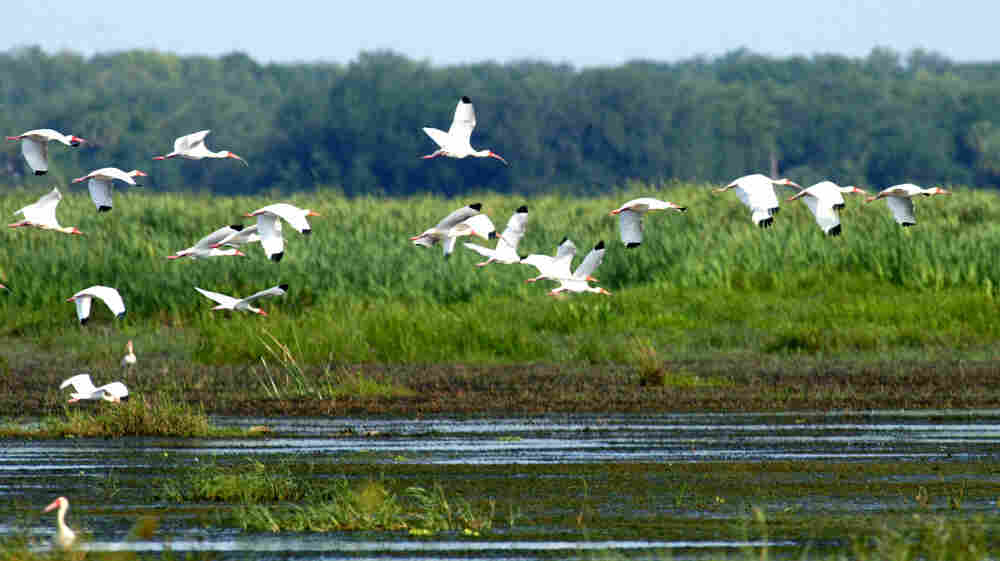 A flock of ibis flies at the Oak Creek Marsh, a former cattle pasture near the Kissimmee River, the headwaters of Florida's Everglades. Luis M. Alvarez/AP hide caption 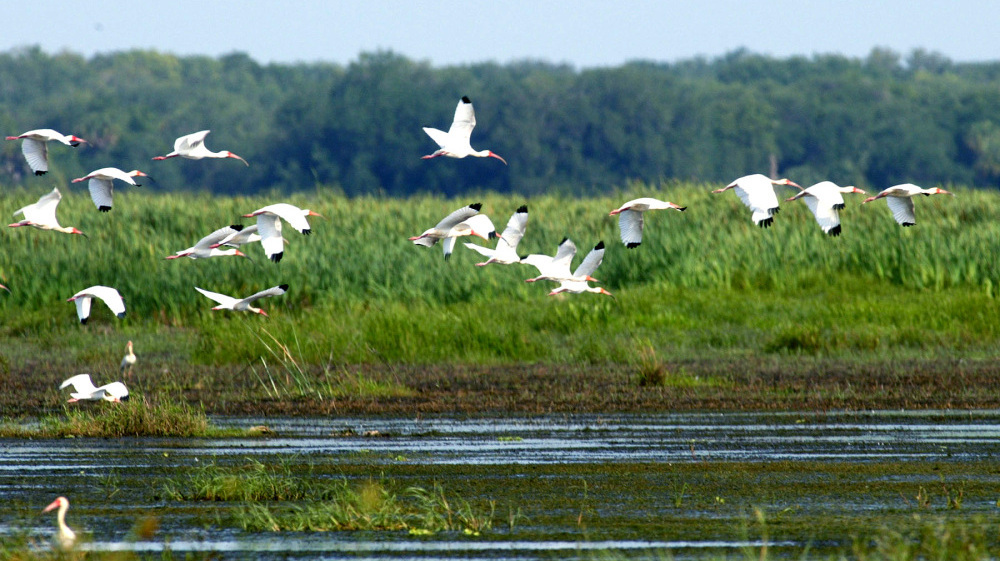 A flock of ibis flies at the Oak Creek Marsh, a former cattle pasture near the Kissimmee River, the headwaters of Florida's Everglades.

In Florida, federal officials have released plans for a new wildlife preserve just south of Orlando. The Everglades Headwaters National Wildlife Refuge will include at least 150,000 acres, but there's a twist — most of it will remain under private ownership.

Visitors mostly come to central Florida for its theme parks and beaches, but long before Walt Disney set his sights on the part of the state where he erected a castle at the Magic Kingdom, it was known for its lakes, rivers and grasslands. 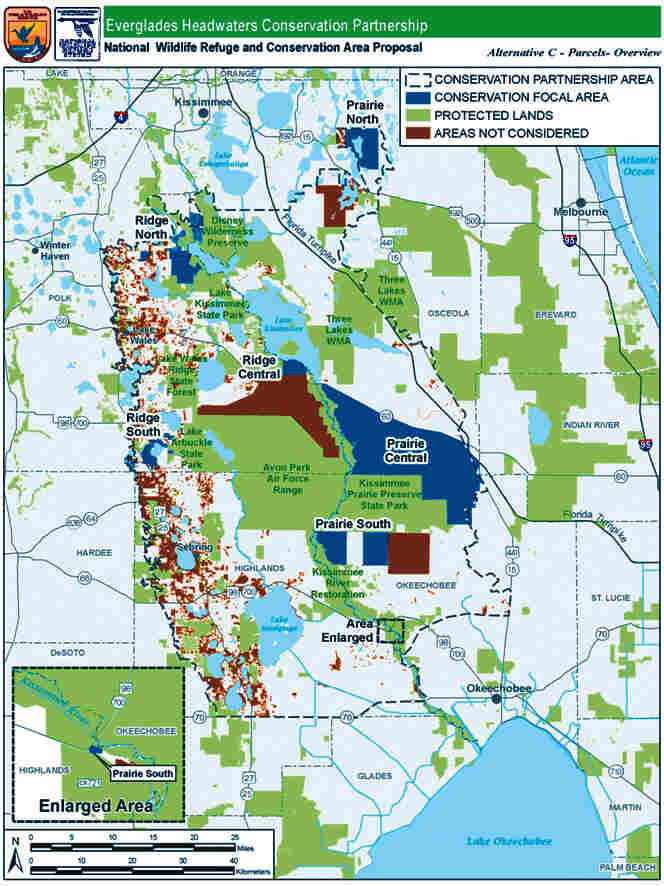 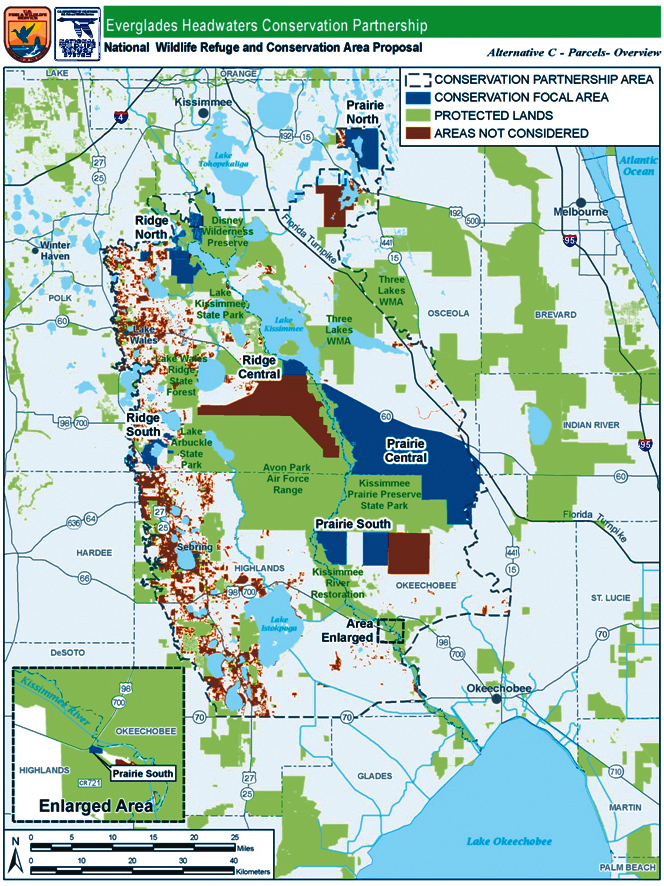 This map provided by the U.S. Fish and Wildlife Service shows the proposed area of the Everglades Headwaters National Wildlife Refuge in Kissimmee, Fla.

"We're also looking at a landscape that is just covered with endangered species and threatened species," Pelizza says. "I think there's 98 in this habitat — in this landscape of the Everglades headwaters."

The Interior Department recently released a map and details for the new preserve in Kissimmee, Fla. The U.S. Fish and Wildlife Service is working along with the Nature Conservancy to protect at least 150,000 acres from development — an area that includes wetlands, rivers and lakes.

Pelizza says preserving it will help save the Everglades, 90 miles to the south.

"This is where the water starts and ultimately ends up down in Everglades National Park out in Florida Bay," he says. "So, it's really important to make sure that the water quality and the distribution of that water from here is healthy so that the restoration activities that are occurring further south have better water quality and better distribution."

A New Approach To Preservation

To create the refuge and conservation area, Fish and Wildlife is trying something it's done in other parts of the country, but not in Florida. Instead of buying the land, the agency is seeking to create most of the refuge through conservation easements. Under these agreements, cattle ranchers and other big landowners would retain ownership, but give up their rights to develop their property for housing or shopping centers.

Mark Musaus, a deputy regional director for the U.S. Fish and Wildlife Service, says two thirds of the refuge will be protected through those agreements with landowners.

"We can get more through easements than we can through fee title, in terms of the purchase," Musaus says. "It is costly to be able to operate fee title lands, so that's a factor as well. I think we realize as we are facing the conservation challenges that are out there today, that we can do more in a partnership effort working with those who are already there and also have the same kind of vision we do."

Musaus is talking about the cattle ranchers who pioneered central Florida and still own large rural sections of the state.

One of those ranchers, Mike Adams, runs a 50,000-acre ranch started by his grandfather in the 1930s. He says he'll be interested in the conservation plan — if it's done correctly.

"We have aspects to our ranch that we'd like to see preserved forever," Adams says. "At the same time, we're what we'd consider sort of a modern cow-calf operation. So it has to be flexible enough to allow us to change."

Adams says there are some good models out there for conservation easements and U.S. Fish and Wildlife appears to be listening. In public hearings earlier this year, the agency heard from some ranchers who made it clear they just weren't interested.

The agency now says it will not use eminent domain to acquire land and will only work with ranchers who want to sell. U.S. Fish and Wildlife hopes that agreement will tamp down concerns from independent ranchers and other landowners suspicious of a government land grab.

For ranchers, Mike Adams says, signing over some property rights may make the difference between staying in the cattle business and selling out to developers. He says it will help keep the land values down so he and other ranchers can transfer it to the next generation.

"It's kind of like my father — he left plenty of work ahead of me and I'd like to do the same to my kids — you know, give them the tools to continue," he says.

U.S. Fish and Wildlife plans to spend some $600 million on the project and hopes to begin acquiring land and easements for the new Everglades headwaters refuge by the end of next year.