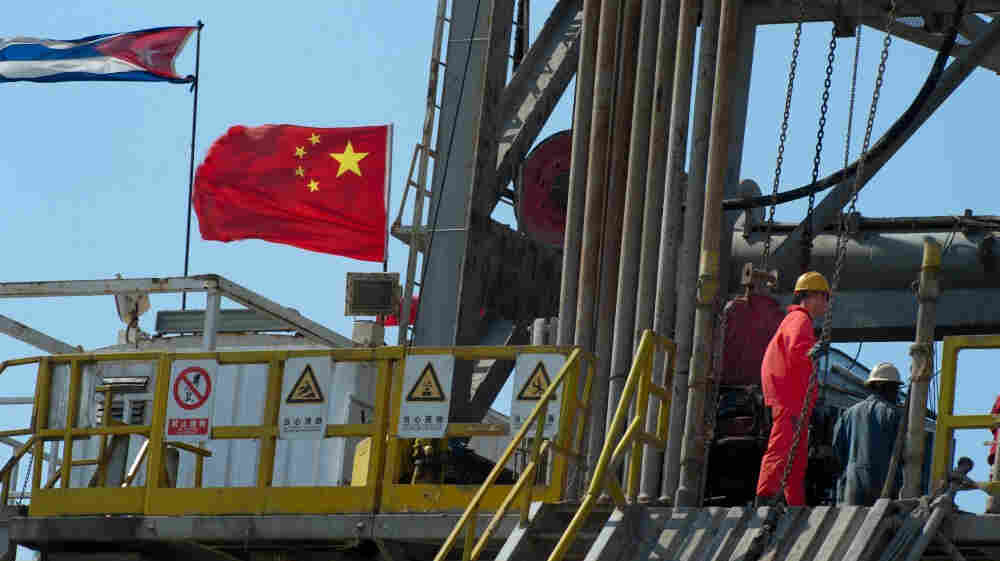 Employees work on an oil rig operated by Cuba and China in Havana in April. A Chinese-built rig is expected to begin drilling exploratory wells off Cuba's northwest coast as early as November, raising environmental concerns in the U.S. Adalberto Roque /AFP/Getty Images hide caption 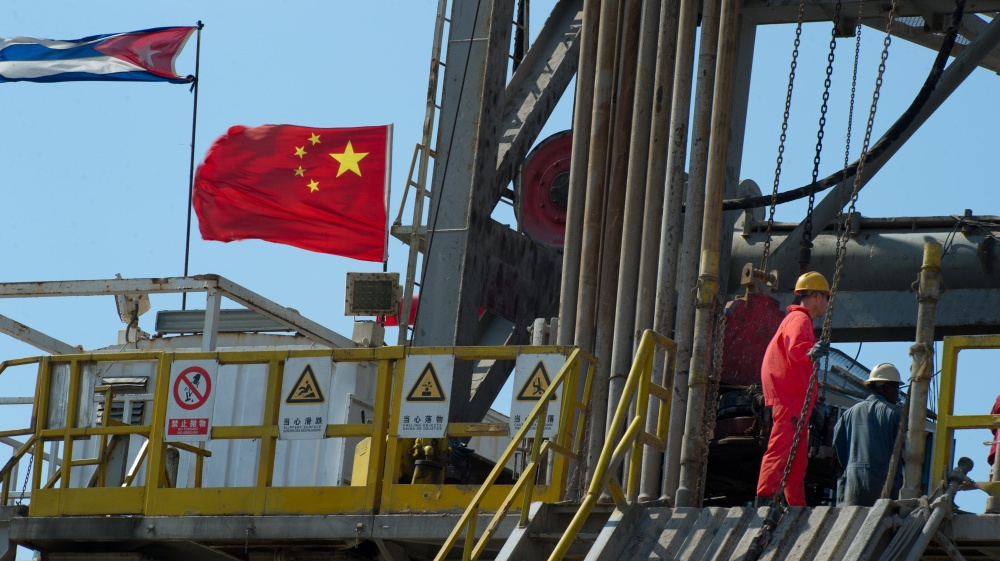 Employees work on an oil rig operated by Cuba and China in Havana in April. A Chinese-built rig is expected to begin drilling exploratory wells off Cuba's northwest coast as early as November, raising environmental concerns in the U.S.

An oil rig built by China is now en route to the deep waters off northwest Cuba, where it could begin drilling exploratory wells as soon as November.

Recently, U.S. oil spill experts were in Havana, including the man who co-chaired the investigation into last year's BP Deepwater Horizon spill in the Gulf of Mexico.

The U.S. group says long-running American trade sanctions stand in the way of proper spill preparation and a coordinated cleanup if something goes wrong on the wells that are just 60 miles from the Florida Keys.

Offshore oil drilling is banned along the Florida coastline. But the Cuban operation will be so close to U.S. shores that ocean currents could carry a spill through the Florida Keys, and foul beaches along the Atlantic Coast.

When former EPA Administrator William Reilly met with Cuban officials in Havana last week, he said the Cubans were serious about safety, even quoting from recommendations he'd written in the Deepwater Horizon report.

I have the impression they are deeply aware, very conscious, and quite apprehensive about what could go wrong.

"I have the impression they are deeply aware, very conscious, and quite apprehensive about what could go wrong," he said. "They know they've never regulated oil and gas in the offshore environment before. They know it's an order of magnitude more sophisticated and more risky. They're going to go very deep. All of those are going to require training, expertise and a culture they've not had. They've got a lot to do."

The rig will not be operated by Cuba, but by foreign partners, led by the Spanish energy company Repsol. Geologists have estimated there may be 5 billion to 20 billion barrels of undersea oil off the island's northwest coast, enough to make Cuba a significant producer.

A major find would also be a huge boost to the cash-strapped Cuban government, and Florida lawmakers have criticized the delegation's trip, saying it lends "credibility" to the drilling plans.

Dan Whittle is an attorney with the Environmental Defense Fund, which organized the trip. He defended its goals.

"By all accounts, Cuba intends to start drilling as early as November or December. So we can't simply hope it won't happen. If and when Cuba drills, it's simply imperative that we be at the ready to ensure that they get it right, that they do it safely and in an environmentally sound manner," he said. "So this isn't about politics. It's about protecting our beaches, our shores, our fisherman, our communities."

Cuba's drilling plans have made for some unusual alliances between environmentalists like Whittle and oil industry veterans pushing for the U.S. to engage Cuba on contingency planning.

Lee Hunt is president of the International Association of Drilling Contractors, which is based in Houston and represents rig operators.

He said Cuba wants American help and has not cut corners on safety. Cuba has also sent hundreds of engineers to be trained with deep-water experts in Norway and Brazil. The rig, Hunt added, will have even more advanced safety mechanisms than the Deepwater Horizon.

"We don't need to be afraid of a Chinese rig working in Cuban waters. They're working everywhere around the world. We don't need to have excessive anxiety over a Spanish oil company. They're a world-class operator," he said.

"What we do have a concern with are the impediments to the operator and contractor acquiring, in a timely fashion, the appropriate technology for prevention, and in the event of a disaster, for spill response and containment," he added.

Hunt said thousands of jobs could be created if American drilling equipment suppliers and cleanup contractors along the Gulf Coast were licensed to do business with Cuba. If not, he said, cleanup supplies might have to come from as far away as England or Brazil.