Accessibility links
Calif. Medicaid Expansion: A Lifeline For Ex-Convicts At least half a million people are expected to get health care benefits in an expansion of California's Medicaid program, including many former prison inmates. Many ex-offenders will now be covered for care, including mental health and substance abuse — problems that, when left untreated, can lead them right back behind bars. 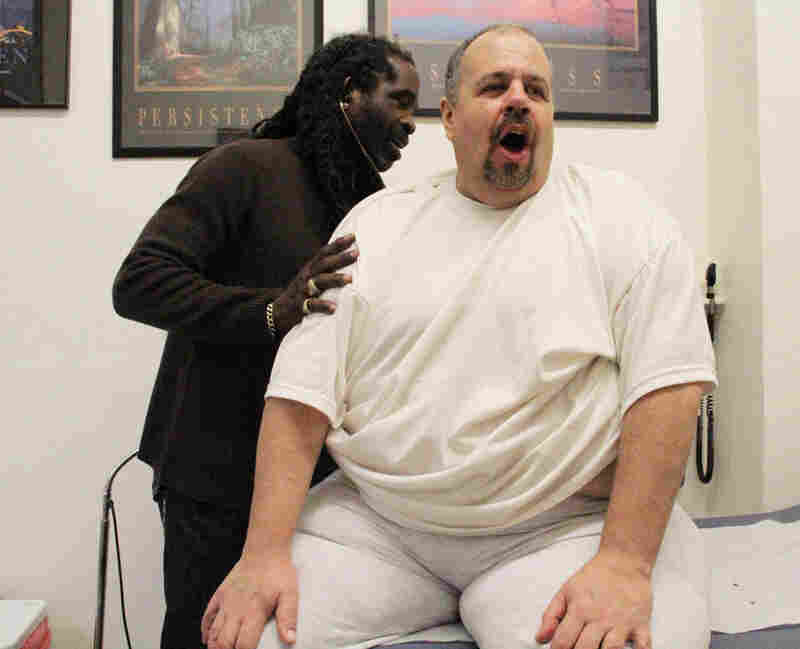 Healthy Oakland physician assistant George Pearson listens to Darren Thurmond's breathing after Thurmond is released from San Quentin State Prison earlier in the day. Thurmond will go to Healthy Oakland for all of his primary care. Alex Liu/KQED hide caption 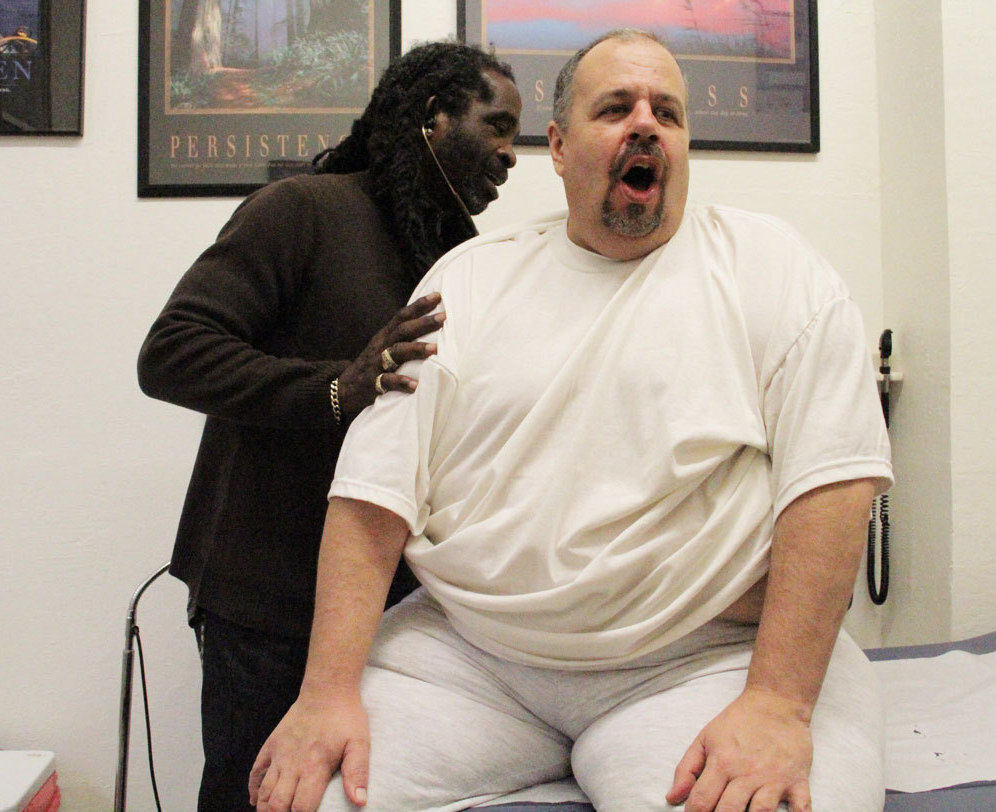 Healthy Oakland physician assistant George Pearson listens to Darren Thurmond's breathing after Thurmond is released from San Quentin State Prison earlier in the day. Thurmond will go to Healthy Oakland for all of his primary care.

California has embarked on an ambitious expansion of its Medicaid program, three years ahead of the federal expansion that the health law requires in 2014. At least half a million people are expected to gain coverage — mostly poor adults who never qualified under the old rules because they didn't have kids at home.

Among those who stand to benefit right now are ex-offenders. Inmates often leave California prisons with no consistent place to get medical care. But that's changing.

Just outside the metal gates of San Quentin State Prison north of San Francisco, a prison van stops and Darren Thurmond lumbers out. He wears a prison-issued gray sweat suit, stretched tightly over his large belly, and carries his possessions in a crumpled brown paper bag. A counselor from a local health clinic is here to give him a ride to Oakland.

Thurmond has been in and out of prison over the past 20 years for cocaine and methamphetamine possession. Now, at 45, all the drug use and hard living has damaged his heart. He hasn't had health insurance since he was a kid, and his heart problems were first diagnosed and brought under control in prison. But each time Thurmond gets out, he's left with a four-week supply of medication and no insurance.

"I can't afford any health care right now," Thurmond says. "Hell, I'm on parole. I'm in and out of the system. You know?"

Thurmond's first stop after his release is at a nonprofit called Healthy Oakland. It's one of the few clinics in California that offer medical care to ex-convicts who have typically been excluded from public insurance programs.

Thurmond sits down for a full medical checkup with George Pearson, the clinic's physician assistant. They go over his heart problems, his weight and the painful arthritis that's overtaking Thurmond's hips.

Pearson says a 45-year-old ex-convict will often have the ailments of someone 10 years older. Ex-convicts have higher rates of almost all chronic conditions, like high blood pressure, diabetes and asthma. It's from living a hard life, to be sure, he says, but it's also because they have common medical problems that go untreated.

Now, many of those getting out of prison and other poor adults in California are being enrolled in a Medicaid-like program where they will be covered for preventive care, prescription drugs, specialty visits, mental health and substance abuse — pervasive problems that when left untreated, researchers say, can lead offenders right back to prison or jail.

Pearson says giving ex-offenders health insurance and assigning them a regular doctor brings some order to their chaotic lives.

"Their whole life is transitional," he says. "And it lacks stability. You need a facility that's going to be the home of their records, going to know them as a person. That itself prevents overutilization of the E.R. and that kind of thing. Because if he talks to me first, he may not need to go to the E.R. Or if he goes there, he goes intelligently."

Some county health departments in California are using new federal money to restructure their safety nets to look more like a robust health care system.

"Historically, services for this population are fragmented and tend to be episodic," Briscoe says. "And what we're trying to do is prepare for health reform by assigning all consumers in our system, all clients in our system, to a medical home."

That means asking ex-offenders to pick one place to get their basic medical care. Briscoe is also adding mental health therapists to county primary care clinics.

Those preparations are especially important as California begins to comply with a court order to reduce its state prison population. To relieve overcrowding, thousands of lawbreakers are expected to be put on probation in their hometowns instead of going to state facilities. That means even more ex-offenders signing up for coverage, which will add an additional burden, many say, to an already maxed-out Medicaid system.

"Treating substance abuse, HIV, hepatitis C will reduce the disease rates in our communities," she says.

Wang and others say health insurance, though, is not a magical cure for a group of people with more pressing, everyday needs.

After Darren Thurmond finished his doctor's visit at Healthy Oakland, I drove him to a pharmacy to pick up his many prescriptions — a trip that would have taken an hour by bus and a painful walk with his arthritic hips. After, we headed to a Mexican restaurant in downtown Oakland for lunch. Thurmond had fantasized in prison about authentic enchiladas.

He is thankful, he says, that he now has a regular doctor. But he's homeless, living in his van and can't quite figure out how he'll get to his appointments to get his blood work checked or his prescriptions refilled.

"Being homeless, often I have the time to do it, but I don't have the gas to get there," he says.

For now, Thurmond is thinking pragmatically. It's his first day out of San Quentin and top on his mind is finding a job, getting money for food, necessities and gas, and finding a place to shower. With no hint of pity, he says, "I'm pretty resourceful."