Accessibility links
Anamanaguchi: The Band That Plays Nintendo Anamanaguchi has helped popularize "chiptune," a bionic breed of punk that places guitars and video-game consoles side by side in virtual harmony. 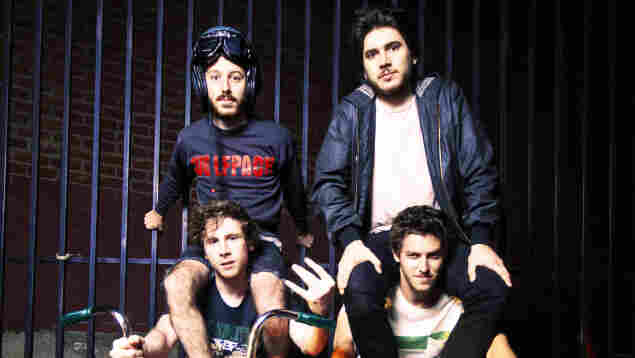 Anamanaguchi combines the sound chips of old Nintendos and Game Boys with the guitars and drums of rock. Courtesy of the artist hide caption

All songs recorded at the Ottobar in Baltimore on Aug. 20.

Anamanaguchi is a punk band that's part of an underground music scene known as "chiptune," an emerging form of electronic music that creates a layered sound from limited technology: video-game systems from the '80s. The group's music got its name because it combines the sound chips of old Nintendos and Game Boys with the guitars and drums of rock; it uses software designed for writing songs, then installs those songs on chips into old game machines. On stage, its members play traditional instruments like guitars and drums along with the video-game console, chirping a digital melody.

"Eight-bit music and working with it is pretty much like the punk-rock world of electronic music," says Peter Berkman, who composes and programs most of the songs and also plays guitar in the band. When he says "8-bit," he's talking about the low-tech quality of the music and the video games from which it came. "It's taking something that's superorchestrated, like most of the electronic music you hear today, and breaking it down to its most basic principles."

Berkman says that even though it's a challenge to create music that can fill a club using the small "sound palette" of an old Nintendo game system, those sounds have the power to evoke a Technicolor world.

"Whenever you use those 8-bit sounds," Berkman says, "you associate them with these fantasy places, and that aesthetic of these worlds that exist nowhere else but your imagination is tapped in supereasily by using these sounds that were considered for a long time to be off-limits to artists."

Anamanaguchi's music grew out of video games, and its members were asked to create the soundtrack for one — their song "Leave the Past Behind" was featured in last summer's video game Scott Pilgrim vs. the World.

Drummer Luke Silas says he doesn't want Anamanaguchi to be simplistically stereotyped as a "video-game band."

"It is an instrument the same way that someone would use a guitar for a million, billion purposes," he says. "It has nothing to do with genre. It's a medium."