Accessibility links
Is Walmart A Magnet For American Mayhem? One customer was nabbed by police for sampling raw meat in a Pennsylvania store. A family of five was living in a car at a Walmart in Florida. And at a store in Missouri, a girl had a run-in with a monkey. At any given moment, there are 850,000 Americans inside a Walmart store. Something weird is bound to happen.

Is Walmart A Magnet For American Mayhem?

Is Walmart A Magnet For American Mayhem? 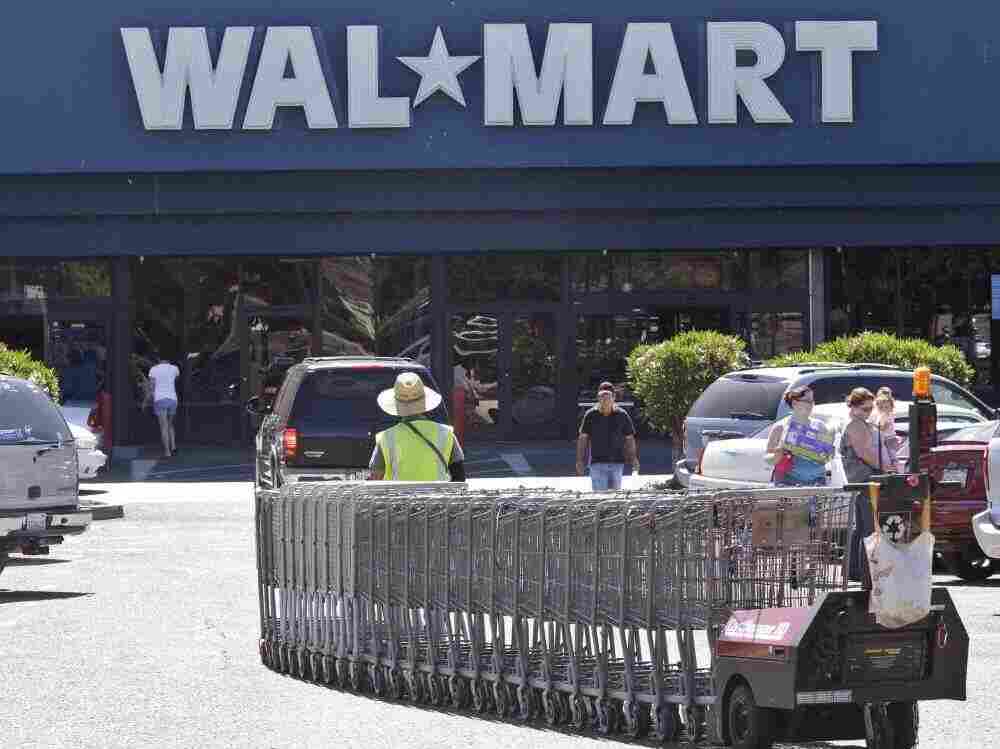 In virtually every county, there is a Walmart open every hour of every day, and every one of those Walmarts is being visited by 37,000 people a week — that's 220 people an hour, in every Walmart, every hour of the day. Here, a Walmart worker pulls carts at a store in Pittsburg, Calif. Paul Sakuma/AP hide caption

Files from the front lines flow in daily — some serious, some sad, some just plain silly. But all point to the notion that perhaps Walmart has become a major magnet for American mayhem.

The Wall Street Journal spotted the phenomenon recently. The headline: "Today's Special at Wal-Mart: Something Weird." "Almost any imaginable aspect of American life can and does take place inside Wal-Mart stores, from births to marriages to deaths," observed the Journal's Miguel Bustillo. "Former Alaska Gov. Sarah Palin once officiated a wedding at the Wal-Mart in her hometown of Wasilla."

Walmart, long accused of draining the life from the town squares and main streets of small-town America, has gradually become the main square of the United States.

Since that story, there have been reports of two Walmart employees accused of stealing money from their Arizona store to be used for a sex change; a couple in South Carolina who found an image on their Walmart receipt that looked like Jesus; and a woman in a string bikini who was involved in a contretemps at an Oregon store.

What is it about Walmart? As a species, we are fascinated by the place. The Web is awash with sites that scrutinize the Arkansas-based retailer's every move. Walmart Watch, funded by the United Food and Commercial Workers Union, says its mission is to challenge the multibillion-dollar retail chain "to more fully embrace its corporate responsibilities." The now-infamous and snarky People of Walmart posts photos of shoppers. Hel-Mart offers anti-Walmart merchandise, such as T-shirts that say, "Resistance Is Futile." Videos of people praising, mocking, pranking, walking around, dancing in Walmart are continuously posted on YouTube.

Perhaps our constant watch on Walmart is like looking into a multidimensional mirror. It's just a store — aisles of food, racks of clothes, shelves of electronics and toiletries and housewares — like so many others. There are occasional stories of weird things happening at a Target. Or at a Kmart.

But the Walmart store has somehow become something more in this country, occasionally including a landmark of looniness and an outpost for outliers. And on some days, the local Walmart is a high-def pageant of popular culture, a wacky video game come alive, a swirling blender of the good, the bad and the downright strange.

A Microcosm Of American Life

Officially, Walmart explains the apparent zaniness this way: "Over the years, Walmart has become a microcosm of American life," says company spokesman Lorenzo Lopez. "With stores serving millions of customers in communities nationwide, it's not uncommon for us to see our share of what happens every day in cities and towns all across the country."

Lopez adds: "Some of the stories that make news are the unusual and sometimes unfortunate events, but the ones we embrace are the simple acts of kindness we see every day among our associates and customers."

On balance, there are plenty of tales of goodness at Walmart, as well. Recently a podiatry clinic in Massachusetts took a dozen students to a Walmart and gave each $75 to buy food for their families. In New Hampshire, a Walmart associate who runs the one-hour photo machine was able to provide swifter service — handing over an envelope of photos — because she recognized a customer from the personal pictures.

And there are other, wacky acts of "kindness" like the story of the man in a cow costume who, police say, stole milk from a Virginia Walmart in April and began handing it out to strangers in the parking lot.

So why does such an incredible array of stuff happen at Walmart?

"Walmart, long accused of draining the life from the town squares and main streets of small-town America, has gradually become the main square of the United States, replacing the place it has helped put out of business," says Charles Fishman, author of The Wal-Mart Effect: How the World's Most Powerful Company Really Works – and How It's Transforming the American Economy.

Weird behavior at Walmart often gets more attention than the company's beneficence. In fiscal year 2011, according to the corporate website, charitable giving by Walmart and its philanthropic foundation included:

* With 1.5 million employees in the U.S., Walmart is the country's single largest private employer. "Walmart has added more employees in the United States in the last year than Google or Amazon actually employ total," Fishman says. "In many states — at least half the 50 states, by my very laborious count — Walmart is also the No. 1 employer."

* There are 3,140 counties in the United States and some 3,822 Walmart stores of every kind — Walmarts, Supercenters, Sam's Clubs. That averages out to more than one store per county. So there are roughly 500 Walmart employees per county.

* Of the 3,822 Walmart stores, 2,939 are Supercenters, which means they are open 24 hours a day. So in virtually every county, 500 people work at Walmart, and there is a Walmart open every hour of every day, and every one of those Walmarts is being visited by 37,000 people a week — that's 220 people an hour, in every Walmart, in virtually every county in the whole country, every hour of the day.

A Matter Of Scale

Marveling at the strange reports from Walmart gets Fishman really wound up. "If you do just one more bit of math," he says, "that means that at any given moment in the U.S., there are 850,000 Americans inside Walmart stores. That's truly amazing. If only one-tenth of 1 percent of them are doing something a little distinctive, well, that's still almost 1,000 people."

Americans, he says, "literally, live at Walmart. We spend a huge amount of time at Walmart every week — not individually, but collectively. And so anything that can happen in the world, in the country, in human behavior — both good and bad — is going to happen at Walmart."

Fishman doesn't think that there is something about Walmart, in particular, that attracts more unusual behavior than another store might. It's just a matter of opportunity — because of the store's accessibility and vast size.

The stores take up a lot of real estate in a community, Fishman points out. "Walmart stores themselves tend to be 4 acres or so under roof — a wide expanse — plus another 20 acres of parking lot. That's a lot of space," he says. "That, too, has an impact — the stores are so large, you can kind of lose yourself inside a Walmart, feel alone, and feel like you can do almost anything and no one will ever know."

The catch, of course, is that nowadays surveillance cameras are everywhere. And many people have cellphone cameras to document the dizzy deeds. And the Internet spreads weird stories with alacrity and glee.

And so we learn recently of the Louisiana man accused of pumping low-priced Walmart gas into a 350-gallon plastic container in his van — to mark up and resell at his convenience store — and was arrested for careless handling of a dangerous material. And of the Tennessee woman accused of trying to shoplift 111 items from a Walmart — including clothing, jewelry, miscellaneous craft items and a box of zip-lock bags.

In many ways, Walmart today is more than a shopping experience or a primo spot for people watching. It is a pumped-up fun house on the carnival midway that is contemporary America.