Accessibility links
Census: Poverty Rate Rises In 2010 The nation's poverty rate rose last year to 15.1 percent, the highest level in 17 years, according to new data from the Census Bureau. The agency's latest poverty report, released Tuesday, shows that the median income dropped last year by more than 2 percent to about $49,445. 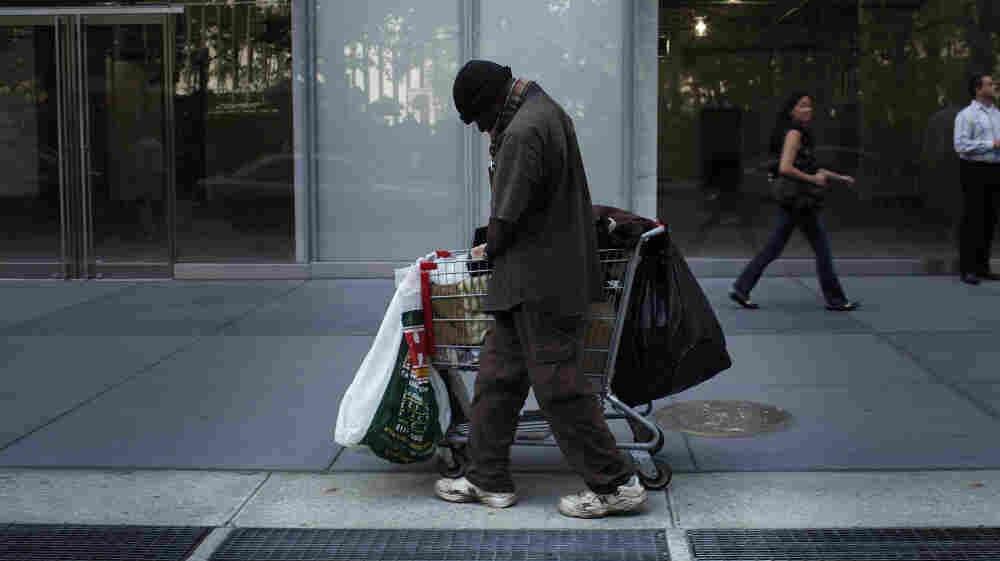 The nation's poverty rate rose last year to 15.1 percent, up from 14.3 in 2009, according to a new report from the Census Bureau. Spencer Platt/Getty Images hide caption

The nation's poverty rate rose last year to 15.1 percent, the highest level in 17 years, according to new data from the Census Bureau. The agency's latest poverty report, released Tuesday, shows that 46 million people were poor and that the median income dropped last year by more than two percent to about $49,445.

Not unexpectedly, the continued lack of jobs was the main cause.

Economist Rich Burkhauser of Cornell says income declined for just about everyone and — surprisingly — at a faster rate overall than it did in 2008, when the recession was in full swing. Burkhauser says the main reason is a big decline in the workforce.

"The number of males who are working has fallen by over 3 million workers since 2007, and last year it fell by another 650,000. So that's very disturbing," he says.

Employment among women also shrank, and the percentage of the employed who are only working part-time also grew. This pushed more and more people below the poverty line, which the Census Bureau defines as a family of four with income below about $22,314 a year.

For certain groups, the news was especially bad. The poverty rate for Hispanics was about 27 percent. It was about the same for African-Americans, like Andre Colter of Washington, D.C.

But Colter is both. Since May, he's lived on a bench on Pennsylvania Avenue, halfway between the White House and the Capitol, where lawmakers are trying to reach some agreement on what to do to create more jobs. Colter is looking for a job in construction, where he worked until earlier this year, but he's not having much luck.

"I would take an office job. I'll start in the mailroom. I'll work on your trash truck. Right now, I'll take anything," Colter says.

The Census Bureau says short of sleeping on the streets, many more people are doubling up — living with friends and relatives. Since the start of the recession, the number of doubled-up households has grown about 10 percent to almost 22 million. And this past spring, almost 6 million young adults ages 25-34 were living with their parents — more than a million more than before the downturn began. The bureau says almost half of these young adults would be considered poor if their parents weren't supporting them.

Another disturbing figure is the continued rise in child poverty. Last year, 22 percent were poor. Sheldon Danziger, a public policy professor at the University of Michigan, says this does not bode well for future prosperity.

"We know that children growing up in poverty are more likely to drop out of high school than non-poor children, and they're less likely to go onto college, which will contribute to lower wages in the next generation," Danziger says.

Both he and Burkhauser note that government spending on things such as unemployment insurance kept the poverty rate from going even higher. But, like the politicians, they differ over what should be done now. Danziger thinks unemployment benefits need to continue to prevent more people from dropping below the poverty line. Burkhauser prefers cutting marginal tax rates to encourage more businesses to hire.