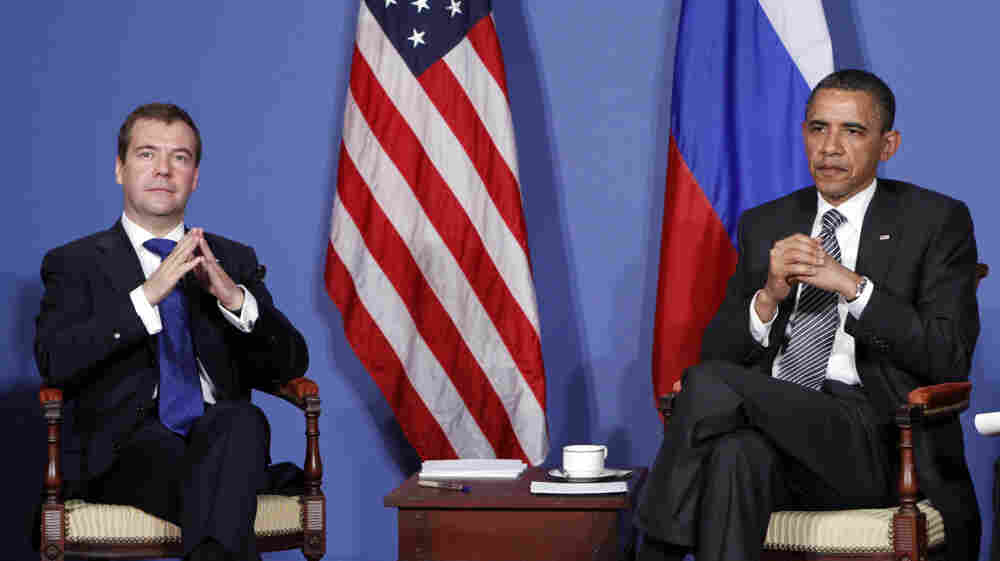 President Obama meets with Russian President Dmitry Medvedev on the sidelines of the G8 summit in Deauville, France, on May 26. Obama's "reset" policy with Russia led to improved relations, but the countries are now facing some difficult issues. Alexander Zemlianichenko/AP hide caption

President Obama's policy of engagement with Russia has paid off in several concrete achievements, including a nuclear arms control agreement and greater cooperation on Iran and Afghanistan.

But both supporters and critics of the so-called reset policy worry that further victories will be harder to win.

Both nations are distracted by presidential politics, preventing policymakers from talking seriously about matters such as missile defense.

"On the U.S. side, not knowing whether we're going to have an Obama administration continuing after 2012 makes it difficult to get any kind of arms control negotiations going — or any kind of negotiations, really," says Travis Sharp, a fellow at the Center for a New American Security.

Distrust is running high on both sides. Congressional concerns about Russia's human rights violations and treatment of its neighbors — as well as the possibility of Vladimir Putin returning to the presidency — have led to a push on Capitol Hill for limited sanctions.

There have been concrete achievements for U.S. national security from this policy, which didn't give away anything in order to get them.

Samuel Charap, director for Russia and Eurasia at the Center for American Progress

The Specter Of Putin

There is widespread speculation that Putin may indeed seek the presidency, depriving Obama of his preferred negotiating partner in President Dmitry Medvedev.

"There was a gigantic miscalculation in putting all the eggs in Medvedev's basket," says Ariel Cohen, a senior research fellow at the Heritage Foundation, a conservative think tank.

Putin will seek to foster among the Russian electorate the sense that their country is a besieged fortress, for which he will serve as the "protector against America," Cohen says.

A group of senators led by Democrat Ben Cardin of Maryland and Republican John McCain of Arizona have already introduced legislation to impose a travel ban on Russian officials implicated in the death of Sergei Magnitsky, an anti-corruption whistle-blower, as well as other high-profile human rights cases.

The administration put in place a more limited travel ban on certain Russians this summer. Still, critics in Congress remain concerned about missile-defense language contained in the New START arms control treaty, which was ratified by the Senate at the end of 2010.

In order to push that treaty through, Obama pledged to spend more than $100 billion over the next decade modernizing the U.S. nuclear weapons arsenal and delivery system. In light of the budget situation, however, top military officials have warned in recent months that that initiative may be at risk.

Congress will have the opportunity to fully air its concerns about the reset policy when Obama formally nominates his top Russia adviser, Michael McFaul, as ambassador to that country, perhaps as early as this month.

Members of Congress are also certain to be skeptical about approving legislation needed to implement what are widely perceived on the Hill as "favors" to Russia. The possible accession of Russia to the World Trade Organization would necessitate a change in a U.S. law dating back to 1974 regarding its handling of emigres.

"These are ideal opportunities for the Republicans to cause trouble for Obama if he's seen as being soft on the Russians," says Peter Rutland, a Russia expert at Wesleyan University.

The Benefits Of Cooperation

Samuel Charap, director for Russia and Eurasia at the Center for American Progress, a progressive think tank, argues that the reset policy has already paid dividends. Russia has not been a perfect ally when it comes to thwarting Iran's nuclear ambitions, but it has agreed to sanctions.

Military cooperation between the U.S. and Russia is increasing, with Russians even taking part in a NATO training exercise off the coast of Spain this fall. Last month, Russia agreed to a multibillion-dollar deal with ExxonMobil to develop offshore oil fields in the Russian arctic.

"There have been concrete achievements for U.S. national security from this policy," Charap says, "which didn't give away anything in order to get them."

But even a supporter such as Charap concedes that Obama has already picked the low-hanging fruit. Disputes with Russia about human rights, its border policies, trade and how to respond to the Arab Spring will all remain difficult sticking points.

Obama's critics say they don't want to return to more contentious relations with Russia. But they suggest there are reasons to be skeptical about how much the U.S. can hope to gain by continuing to make nice with Russia.

They are willing to acknowledge the success stories, such as New START and the oil deal. But the reset policy, they say, has already hit its natural wall, because of the nations' many conflicting interests.