Accessibility links
Quick Breads: A Solution To Summer's Bounty At this time of year, most gardeners have too much of a good thing. What to do with it all? T. Susan Chang offers some tasty breads you can make in the blink of a baker's eye. 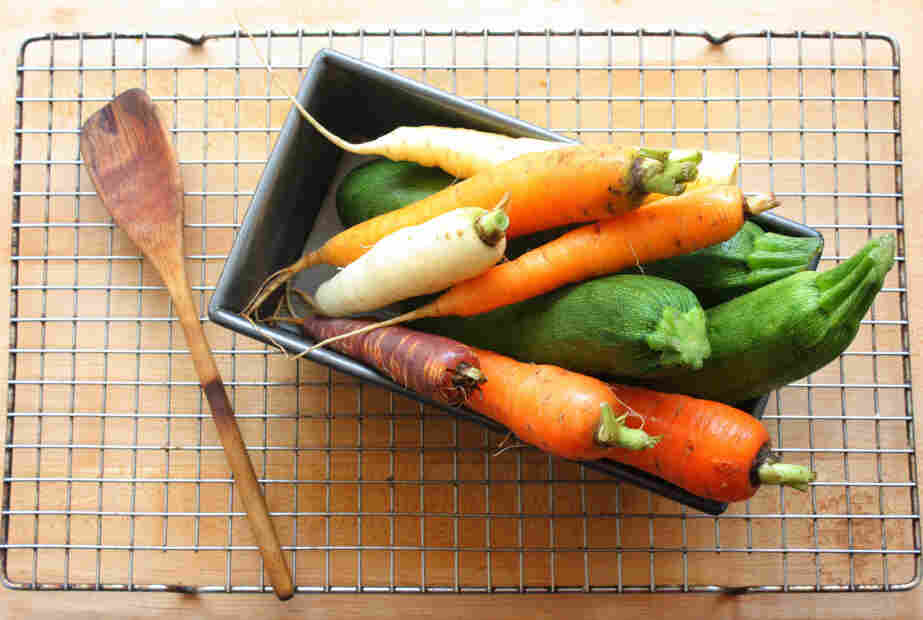 Get recipes for Zucchini Bread, Pumpkin Bread and Carrot Bread.

Unlike practically every gardener since Adam, I have just experienced a zucchini failure. The squash beetles romped all over my zucchini bed, which is a nasty habit they have around August. Six happy weeks of zucchini fritters and stir-fries ended with gray, wilted vines and rotting foliage. Well, it was nice while it lasted.

The garden season will end soon enough, in a fanfare of potatoes and squashes and pumpkins and gourds. As the weather gets colder, they get starchier and more like breads themselves, so it takes less and less effort — a little egg and sugar to sweeten and bind them — to get them to shine in a loaf pan.

Fortunately, zucchini in late summer is one thing a person can count on, even if she's just had her shins kicked by a beetle army. All I have to do is trot over to the nearest farm stand and drop a quarter in the box. Or I can ask a friend, preferably a newbie gardener whose soil is still unknown to pests. Or I can just leave my car unlocked in the parking lot at the end of the next farmers market and see what happens. One way or another, there will be zucchini.

For most people, there will be too much zucchini, which is why at this time of year, it's good to remember that the zucchini is a baking-friendly vegetable (OK, well, technically a fruit if you want to be strictly botanical about it). You might not feel like stuffing it, saucing it or frying it. But even at your laziest, you probably wouldn't mind grating it into a simple batter and throwing it in a loaf pan for a bit less than an hour. What's more, the afternoons are finally cool enough that turning on the oven is like greeting an old friend.

Zucchini bread is one of those breads that's practically impossible to get wrong. Like its cousin the banana bread, it comes together in no time, and if you don't have a mixer on hand, you can just use a wooden spoon and some elbow grease. It's as happy as an afterschool snack as it is at a bake sale or a church coffee klatch. Zucchini bread has no pretensions. It's plain and good, in a down-to-earth, hey-I'm-just-a-vegetable-at-heart sort of way.

T. Susan Chang regularly reviews cookbooks for The Boston Globe and NPR.org and the cookbook indexing website Eat Your Books. Her first book, A Spoonful of Promises: Recipes and Stories from a Well-Tempered Table
(Lyons Press), will be released in fall 2011. Visit her blog, Cookbooks for Dinner.

It's also a quick bread, which simply means there's no slow-fermenting yeast to watch over all day like a fussy baby, while it eats and burps carbon dioxide. In a quick bread, any leavening happens quickly (hence the name), with baking powder or baking soda or both. And while an hour may not be the definition of quickness in fast-paced times, it's still the blink of a baker's eye.

Why do gourd and root vegetables work so well in breads? I think it's their dense texture, which when grated slowly releases moisture and earthy flavor into the surrounding crumb as it bakes. Whatever the reason, I can tell you that what works for zucchini will work for carrots, too. You already know you can make carrot cake and carrot muffins. In fact, I've always said that muffins are merely cake in disguise. Quick bread is basically a muffin in a loaf pan.

You may well ask, "Who needs to use up carrots? Nobody has too many carrots lying around." Well, I do. I've got carrots this year the way other people have zucchini. While the squash beetles partied and raved across the way, my carrots quietly grew, delving deep into the compost, fattening on their drip irrigation. Some of the carrots I lifted last week were 10 inches long, thicker than a broom handle, and crisp enough to spray juice on my glasses when I snapped them. It was a good-enough consolation prize to make me forget the beetles.

The garden season will end soon enough, in a fanfare of potatoes and squashes and pumpkins and gourds. As the weather gets colder, they get starchier and more like breads themselves, so it takes less and less effort — a little egg and sugar to sweeten and bind them — to get them to shine in a loaf pan. A pumpkin is nothing but a zucchini's older cousin once removed, tougher-skinned but sweet on the inside. By the time you taste your first fall pumpkin bread, the glut of August zucchini and the dilemma of what to do with them are distant memories, indeed.

Still, hope forever triumphs over experience in my garden. So I'm setting out a few young zucchini seedlings even now, as summer turns her back on us and starts to walk away. If I've calculated right, I should be able to harvest exactly once before frost. I'll light the wood stove with the dead vines of last year's garden, nibble my zucchini bread and curl up with next year's seed catalog, where the zucchini are neither too many nor too few, but just right in number.

This recipe from Baking at Home with the Culinary Institute of America (Wiley 2004) makes a surprisingly light-tasting loaf and uses up a ton of zucchini. I had a baseball bat-sized zucchini I'd seeded, shredded and frozen, and I used it all up in these two loaves. If you don't happen to have oranges around (and who does at the end of summer?) you can just use a teaspoon of orange extract. 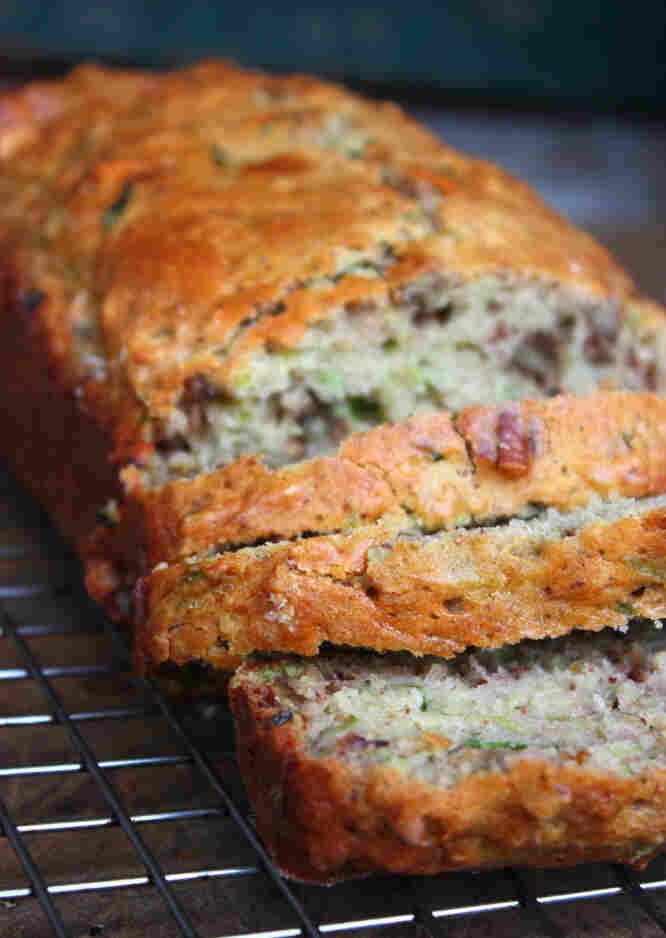 Makes 2 loaves, about 12 slices each

Sift the flour, baking powder, baking soda, salt, cinnamon, nutmeg and cloves into a bowl, and set aside.

Combine the zucchini, sugar, eggs, oil and orange zest in a large bowl, and mix by hand until evenly blended.

Add the sifted dry ingredients to the zucchini mixture. Stir by hand just until the batter is evenly moistened and blended. Fold in the nuts. Divide the batter between the prepared loaf pans.

Bake until the edges are browned and starting to pull away from the pan, and the bread springs back when lightly pressed with your fingertip, about 55 minutes. Remove the loaves from the pans and let cool on wire racks before serving.

I developed this bread last winter in the grip of a serious pumpkin-bread craving. If you have a stand mixer, it comes together in a flash, but you can also make it quickly with just a whisk and a bowl. It makes an unusually wet-looking batter, but the loaf will dry in the oven and rise a little. Just give it enough time, even if the aroma in the kitchen is driving you mad.

Toast the walnuts for 12-15 minutes, chop and set aside. Measure out the 1/2 cup oil. Dip a basting brush in the measuring cup and grease a standard 8 1/2- or 9-inch loaf pan.

In the bowl of a stand mixer, combine the brown sugar and oil on low speed. Add the eggs, one at a time, and then add the buttermilk, the pumpkin puree and the orange extract. Let it continue to mix on low speed while you sift the dry ingredients.

Put the flour, baking soda, cinnamon and salt in a sifter. Sift together onto a sheet of wax paper. Carefully tilt the contents of the wax paper into the mixer as it continues to run. Mix on low speed, scraping down the sides once, until just combined.

Fold in the chopped walnuts gently, and scrape the batter into the greased pan. Bake for 65-70 minutes, or until a skewer inserted in the center of the loaf comes out clean. Cool in the pan for 10 minutes and out of the pan for 20 minutes before serving.

This recipe from The Fearless Baker, by Emily Luchetti and Lisa Weiss (Little, Brown 2011) makes a sweet, moist loaf — one that can almost pass for dessert. Carrots can vary in the amount of moisture they hold. Mine were particularly juicy, so I had to bake on the longer side. You can test the interior with a skewer or toothpick. When the end comes out dry or with a few moist crumbs clinging to it, then the loaf's done. 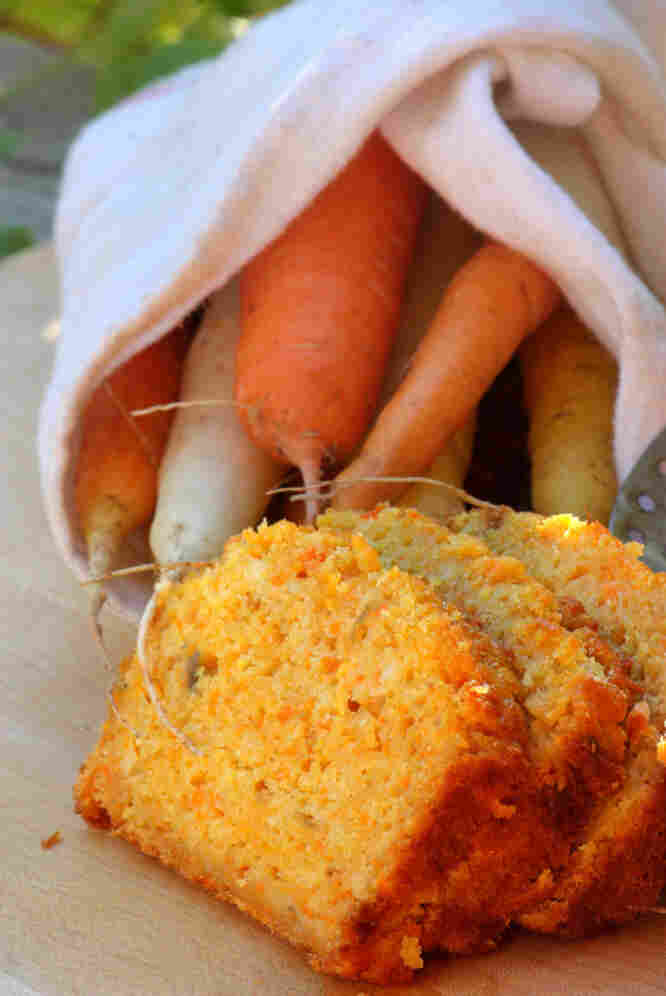 Preheat the oven to 350 degrees. Grease the bottom and sides of an 8 1/2-inch loaf pan with nonstick cooking spray or butter.

Peel and slice 3 of the carrots into 1/4-inch rounds. Bring a medium saucepan of salted water to a boil, add the carrots and cook until soft, about 10 minutes. Drain. Let cool, and then puree in the food processor or blender. Coarsely grate the remaining 5 carrots (you should have 2 cups). Set both the pureed carrots and grated carrots aside.

Put the flour, baking soda, baking powder and salt onto a piece of parchment paper or into a bowl. Set aside.

In a medium bowl, use a wooden spoon (or any other stiff spoon) to mix the butter and sugar until smooth. Stir in the eggs one at a time until combined. Stir in the buttermilk, carrot puree and grated carrots. Add the flour mixture and mix until well-blended.

Spread the batter in the prepared pan. Bake until a bamboo skewer or toothpick inserted in the middle comes out clean, about 55-65 minutes. Let the bread cool for 15 minutes.

To remove, run a small knife around the bread to loosen it from the pan, and then turn it out onto a cutting board or plate. Cool completely. Cut into slices. The bread will keep at room temperature, wrapped in plastic, for 4 days or frozen for 2 months.