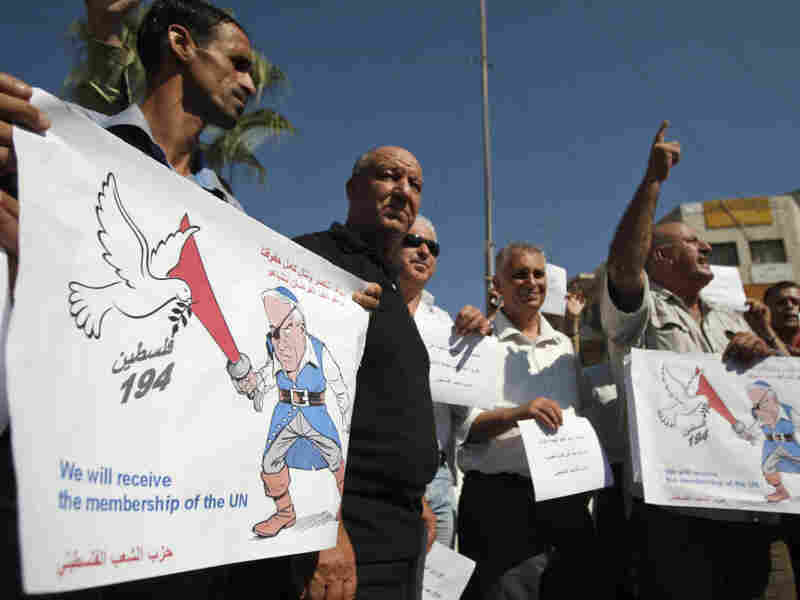 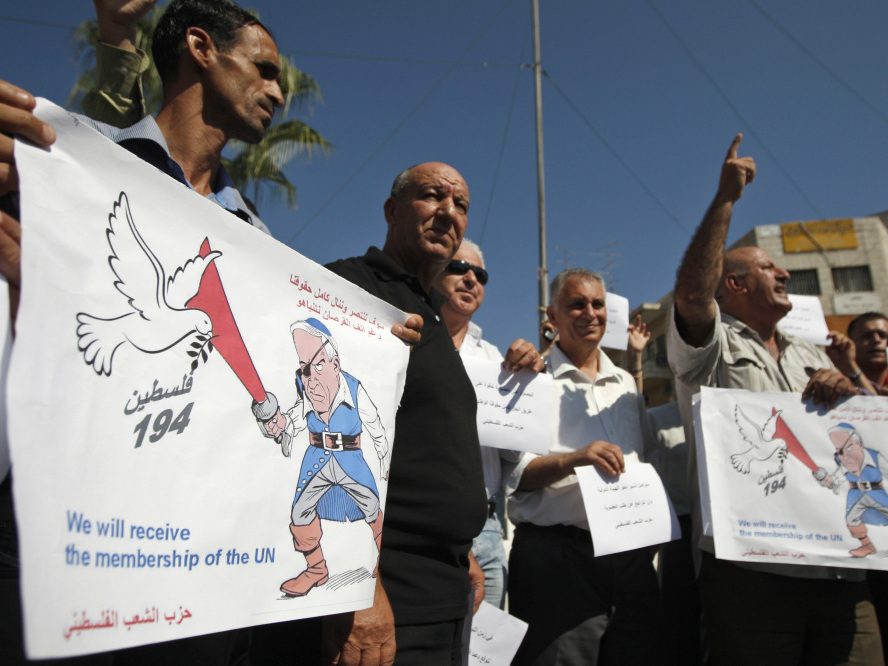 Palestinians hold signs depicting Israel's Prime Minister Benjamin Netanyahu as a pirate during a demonstration supporting the Palestinians' bid for statehood, in the West Bank city of Ramallah on Monday.

As the Palestinians plan to make a bid for statehood at the United Nations next week, many Palestinians see it as a way to break years of deadlock with Israel.

The Israelis, meanwhile, see only diplomatic fallout and the potential for violence.

For Palestinians, the U.N. plan is loaded with symbolism. The central post office in the Palestinian city of Ramallah is issuing a series of commemorative stamps and postcards this month. For the first time, they will identify the country of origin as Palestine.

Postmaster Fathi Shbak says the stamps are meant to inspire pride among Palestinians, and recognition from the rest of the world.

"These things, small things, symbolize a country," he said. "Any foreign person who sees Palestinian stamps or something he will know that there is a country called Palestine in this world."

The Palestinians are hoping that the U.N. will vote in favor of recognizing a Palestinian state that includes the West Bank, the Gaza Strip and East Jerusalem — territory seized by Israeli forces in the 1967 war.

However, under U.N. rules such a move would require action by the Security Council. The Obama administration has already made clear that it will exercise its veto because it believes Palestinian statehood should be negotiated with Israel.

Hanan Ashrawi, one of the Palestinian officials involved in the U.N. bid, says the Palestinians are hoping to shake up the moribund Middle East peace process.

"So now we are trying very hard to rescue chances for peace, and to signal a departure from the business-as-usual approach — where Israeli power politics and American collusion trumped rule of law and human rights and the requirement for peace," she said.

Ashrawi says she has received "countless" phone calls from foreign diplomats and others urging the Palestinians not to go forward with the U.N. bid. She acknowledges that a lot is at stake.

Ashrawi says that the cut-off of funds would fuel anger among Palestinians. But she insists that protests in the West Bank timed to coincide with the U.N. bid will be nonviolent.

"Of course there will be protests and marches," she said. "Now we are adopting very clearly an agenda of nonviolent resistance, but at the same time resistance, yes."

Israeli officials are not so sure. The Defense Ministry has increased the security training it already provides to Jewish settler groups in the West Bank, where approximately 300,000 Israeli settlers live among around 2.5 million Palestinians.

Michael Ben Ari, a lawmaker from the pro-settler National Union Party, recently issued a pamphlet to settler leaders encouraging them to organize their own protests.

"We are discussing a number of options (on) how to match them person for person, march for march," he said. "The settlements will need extra defenses at this time, and they are making preperations."

Ben Ari says he is organizing a conference in the Israeli parliament later this week that will focus on what he calls the threats to Israel's settlements as a result of the Palestinians U.N. bid.

"We hope, in the end, that we can turn their games into an opportunity for ourselves," he said. "We will continue to bring attention to our communities which are a vital part of the state of Israel, whatever the U.N. says."

Standing in front of the Ramallah post office, Aliya Abed, 22, says she is excited by the steps the Palestinian Authority is taking to bolster its bid for statehood. In addition to the new stamps and post cards, mail from the West Bank will now be routed through Jordan, rather than Israel.

She says these are important baby steps to reduce Israel's control over the West Bank.

"Maybe it is a very simple thing, a stamp," she said. "Of course I think the new stamp is part of an independent state."

But she adds that one day, she'd like to see the Palestinians handle their own mail - without relying on either Jordan or Israel. Then, she says, Palestinians can really call themselves independent.